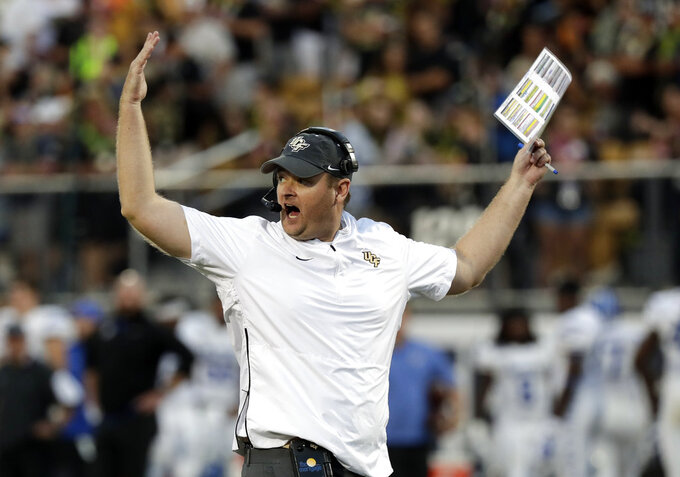 FILE - In this Dec. 1, 2018, file photo, Central Florida head coach Josh Heupel waves his arms during the first half of the American Athletic Conference championship NCAA college football game against Memphis, in Orlando, Fla. No. 7 Central Florida is aiming for a second straight undefeated season and self-proclaimed national championship when they go up against No. 11 LSU in the Fiesta Bowl, Tuesday, Jan. 1, 2019. (AP Photo/John Raoux, File)

GLENDALE, Ariz. (AP) — Central Florida has carried the chip on its shoulder all the way from Orlando to the Arizona desert.

Left out of the College Football Playoff, the seventh-ranked Knights have a chance for a second straight undefeated season and self-proclaimed national championship if they can beat No. 11 LSU in Tuesday's Fiesta Bowl.

"It's kind of frustrating when you don't get a lot of recognition or whatever like that," UCF defensive back Richie Grant said. "We think we can play with anyone."

The Knights (12-0) have proven that over the past two seasons, taking a 25-game winning streak into State Farm Stadium on New Year's Day.

UCF proclaimed itself national champion last year after finishing as the only undefeated team in the FBS. The Knights went all out despite Alabama earning the official national champion title, celebrating with a pep rally in downtown Orlando, a parade at Walt Disney World and a proclamation by Gov. Rick Scott.

UCF kept winning this season, including a stirring comeback against Memphis in the American Athletic Conference title game.

Yet when the College Football Playoff semifinalists were announced, the Knights were never a consideration despite finishing as one of four undefeated team in the FBS.

While fellow undefeateds Alabama, Clemson and Notre Dame joined one-loss Oklahoma in the playoff, UCF was No. 8 in the CFP rankings, in large part because its schedule lags behind those of Power Five schools.

So as Alabama and Clemson head to the national title game after lopsided national semifinal victories, the Knights are in the desert to play in the Fiesta Bowl. A New Year's Six bowl is certainly a huge accomplishment and the hospitality at the Fiesta Bowl is world class, but their only national title shot is of the self-proclaimed variety for the second straight season.

"We're confident in who and what we are as a football program and believe in our track record, what's happened here the last couple of years," first-year UCF coach Josh Heupel said. "At the end of the day, our kids are really focused on the football game that's before us."

LSU (9-3) looked like a CFP contender after climbing to No. 5 in the AP Top 25 with five straight wins to open the season. The Tigers dropped back with a loss at Florida and were all but out of the playoff picture with a 29-0 loss to top-ranked Alabama. LSU closed the regular season with a wild 74-72 loss to Texas A&M in seven overtimes.

"This is a big game for us," Tigers coach Ed Orgeron said. "This means a lot to LSU. It means a lot to our program. It means taking the next step, winning a big bowl, our first New Year's Day Six bowl. There will be a lot of things to build on this."

A few more things to look for from the Fiesta Bowl on New Year's Day:

MILTON OUT: UCF suffered a big blow in its regular-season finale against South Florida when quarterback McKenzie Milton went down with a season-ending leg injury. A two-time AAC player of the year, Milton threw for 2,663 yards and 25 touchdowns with six interceptions before the injury.

The Knights did not suffer a letdown in the AAC title game with Darriel Mack Jr. calling the shots. The redshirt freshman ran for four touchdowns, threw for two more and had 348 yards passing while leading the comeback against Memphis.

RUNNING TIGERS: LSU may not be the most explosive offense in college football, but it does have two solid running options. Senior Nick Brossette ran for 922 yards and 14 touchdowns, while sophomore Clyde Edwards-Helaire added 626 yards and seven touchdowns.

UCF was 117th of 129 FBS teams against the run, allowing 227.4 yards per game, so the Knights might have to outscore LSU to have a shot.

PROLIFIC KNIGHTS: Even without Milton, UCF still has one of the FBS' most prolific offenses.

The Knights were third nationally in total yards with 545.4 per game and fifth with 44.2 points per game. In addition to their passing prowess, Greg McCrae was fifth nationally with 1,101 yards rushing and had 206 with a TD in the AAC title game.