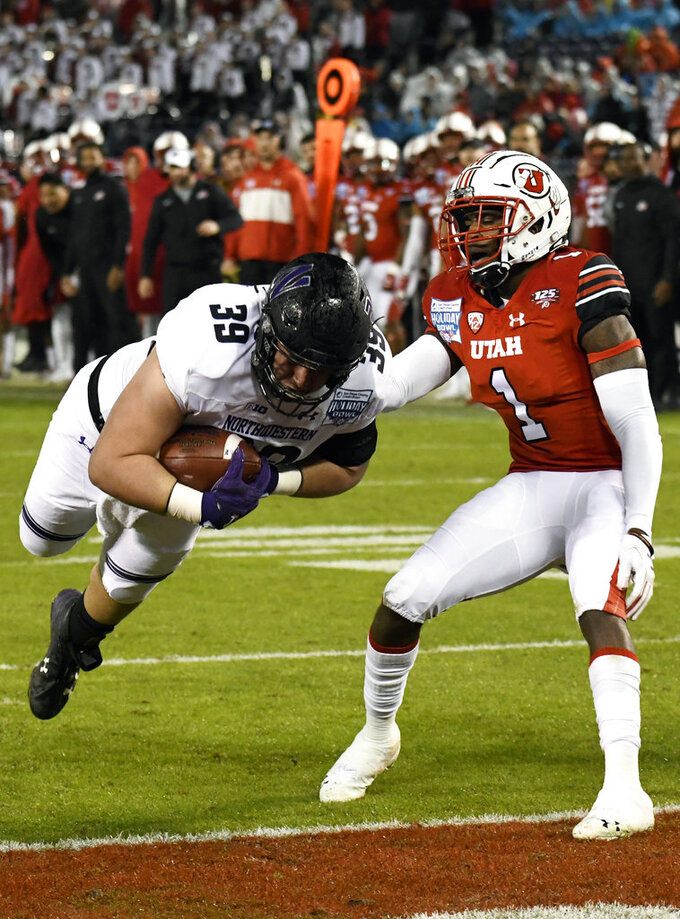 SAN DIEGO (AP) — A cold, hard rain in normally warm, dry San Diego made the Northwestern Wildcats feel right at home, especially as they enjoyed a downpour of Utah turnovers in the Holiday Bowl.

In a dizzying nine-minute stretch of the third quarter, the Wildcats turned three turnovers into 21 points to stun the No. 20 Utes 31-20 Monday night.

The highlight was Jared McGee's 82-yard fumble return for a touchdown, the middle turnover in the nightmarish stretch for Utah.

"Did I think we were going to be able to create that amount of turnovers?" coach Pat Fitzgerald said. "I love San Diego but man I love it when it rains on game day. That was sweet because I think it played a really big factor. It was raining a little bit harder coming out of halftime than it was before the half and I think that played a role in the game."

The Wildcats (9-5) scored 28 points total in the third quarter to win their third straight bowl game under Fitzgerald. The Green Bay Packers reportedly want to interview Fitzgerald for their head coaching job.

Fitzgerald credited the seniors for winning 36 games in four seasons and gushed about the program's future.

"They have set the bar now at a whole new level for our program and we couldn't be more excited about our future," he said.

Asked about his own future, he said: "Hashtag GoCats, man. I'm not going anywhere. This is home forever. Listen, these are my guys. ... I'm a Wildcat for life. I'm so thankful for these guys. ... We're just getting started."

Senior Clayton Thorson became the all-time leading passer for Northwestern, going 21 of 30 for 241 yards for 10,731 career yards. He broke Brett Basanez's school record of 10,580. Thorson threw for two touchdowns and was intercepted once in making his 53rd straight start for the Wildcats, the most by a quarterback in Big Ten history. He is the program's all-time winningest quarterback at 36-17. He was replaced after taking a hard shot midway through the fourth quarter, but came back in.

Utah (9-5) cruised to a 20-3 halftime lead behind redshirt freshman quarterback Jason Shelley before it all fell apart in the third quarter. Shelley had two interceptions and a fumble. Utah had four turnovers in the third quarter and five in the second half.

On the opening drive of the second half, Shelley threw the ball right to Northwestern's Blake Gallagher. Thorson's 52-yard pass to Ramaud Chiaokhiao-Bowman set up his 4-yard scoring toss to Riley Lees.

"We talked at halftime about, get a stop, get a score, seize momentum," Fitzgerald said. "The credit goes to our guys. They were resilient all year. Today was indicative of our team."

The Utes had the ball first-and-goal at the 6 when Shelley rolled right, was hit from behind by Joe Gaziano and fumbled. McGee picked it up on the third bounce and ran down the sideline untouched for an 82-yard return that pulled the Wildcats to 20-17.

"I definitely can't take credit for anything that happened on that play other than running with the ball," McGee said.

The Utes advanced to the 30 and looked like they had enough for a first down on a catch by Jaylen Dixon, but he was stripped by Trae Williams. JR Pace recovered and returned it 34 yards. Two plays later, Northwestern took a 24-20 lead when Thorson threw a 20-yard touchdown pass to senior offensive lineman Trey Klock, a key player in goal line and short-yardage situations.

Northwestern added another touchdown in the third quarter when Lees scored from 8 yards out for a 31-20 lead.

Pace had a second interception in the third quarter, on a deflected pass.

Utah coach Kyle Whittingham said the second half was a nightmare.

"I've been coaching a long time and I don't think I've ever been a part of third quarter like that," he said. "We had complete control of the game at halftime and we came out in second half and proceded to turn the ball over five times. ... You turn the ball over like that and you win almost never."

Shelley was making his fourth start in place of Tyler Huntley, who broke his collarbone against Arizona State on Nov. 3. Also out were leading rusher Zack Moss, leading receiver Britain Covey and leading tackler Chase Hansen, a senior.

Shelley threw a 27-yard touchdown pass to Jaylen Dixon and a 4-yarder to tight end Jake Jackson, both in the first quarter.

Utah lost for the just the second time in its last 16 bowls dating to 1999. Whittingham's bowl record dropped to 11-2. He was trying to become the first to win the Holiday Bowl as a player and coach. He played in the first four Holiday Bowls with BYU, going 2-2. He was inducted into the Holiday Bowl Hall of Fame in 2009.

Northwestern: The Wildcats had minus-6 yards rushing at halftime and didn't get into positive until late in the third quarter.

Utah: Shelley was impressive with his passing and his scrambling until running into trouble in the third quarter.

Northwestern: The Wildcats will have to replace Thorson, who leaves with a legacy as the most productive quarterback in program history. The Wildcats will be back on the West Coast to open the 2019 season at Stanford on Aug. 31.

Utah: After winning their first Pac-12 South title, the Utes will look for more in 2019, if they can stay healthy. They'll get Moss and Covey back, and there could be a spirited QB competition between Huntley and Shelley. The Utes open the 2019 season with their rivalry game against BYU, at Provo on Aug. 29.