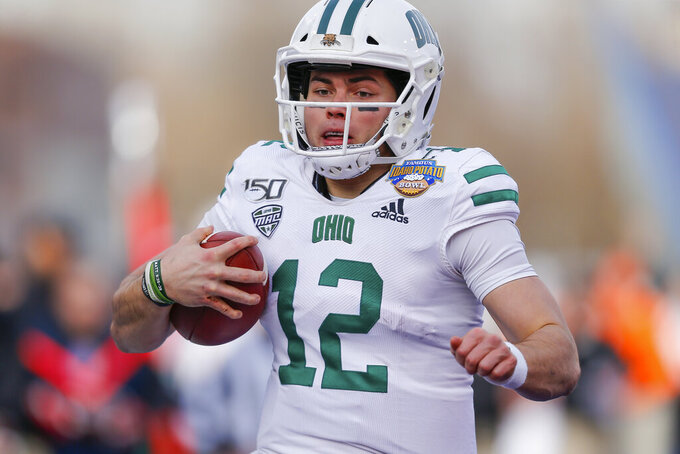 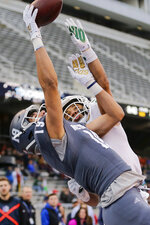 BOISE, Idaho (AP) — Ohio quarterback Nathan Rourke is projected to be the top quarterback taken in the Canadian Football League draft this spring. He’s pretty good at the American collegiate version, too.

Rourke, from Oakville, Ontario, accounted for 231 yards of offense and ran for a touchdown to help Ohio beat Nevada 30-21 on Friday in the Famous Idaho Potato Bowl.

Nevada (7-6), which dismissed defensive coordinator Jeff Casteel and two other defensive position coaches at the end of the regular season, didn’t find much of an answer for Ohio’s high-powered offense until the fourth quarter.

The Wolfpack also were missing three key defensive starters, suspended for their participation in a fight in a loss to rival UNLV in the regular-season finale.

Rourke, who finished with 144 yards passing and 87 yards rushing along with one touchdown, garnered MVP honors, but was uninterested in talking about it. When asked about his award, he quickly pivoted to talk about the defense and their stand at the end of the game. Later, Rourke apologized for never winning a MAC championship during his three years at the school.

“I love coaching him,” Solich said. “We’ve been blessed to have him and I appreciate everything he’s done for this program. He really thinks beyond himself.”

Rourke is also thinking beyond the CFL, hoping to fulfill his dream of playing in the NFL, even if it’s not a traditional route.

Rourke might be overlooked in the NFL draft, but he finished just one touchdown shy of joining an elite trio of college quarterbacks who threw for 50 or more touchdowns and rushed for 50 or more in their career—Lamar Jackson, Tim Tebow, and Colin Kaepernick, all of whom made it to the NFL. And Rourke, unlike Tebow and Kapernick, achieved his stats in only three seasons.

Ohio raced to a 20-9 lead and scored the first 10 points of the third quarter before holding off Nevada's late rally.

The Bobcats lost leading rusher O’Shaan Allison late in the first quarter with an undisclosed injury. De’Montre Tuggle took over, rushing for 97 yards and a touchdown to spark a ground attack that finished with 285 yards on 50 carries spread among five players.

After the game, Solich revealed that Tuggle, who finished as the Bobcats’ leading rusher, broke his pinky finger in warmups and wasn’t sure if he was going to play. But when Allison went out with an injury, Tuggle didn’t hesitate to go.

After the victory, Solich got a traditional victory bath. But this time he was doused in french fries instead of water.

“That's a lot better than water on you,” Solich said. “Over the course of the years, I've had some water on me. I will take those potatoes any time.”

Ohio: The Bobcats will have a big question next season at quarterback with Rourke graduating, but there are plenty of reasons to think Ohio will be a serious contender for the MAC title. Losing just two starters on offense and three on defense, it will be one of the most experienced returning teams in the conference.

Nevada: The Wolfpack will also enter next season with high hopes with Norvell entering his fourth season with a bevy of returnees, including quarterback Carson Strong, who finished with over 2,000 yards passing, and leading wide receiver Elijah Cooks.

Ohio: Will open next season Sept. 5 by hosting N.C. Central.

Nevada: Will host UC Davis on Aug. 29 in its opener.