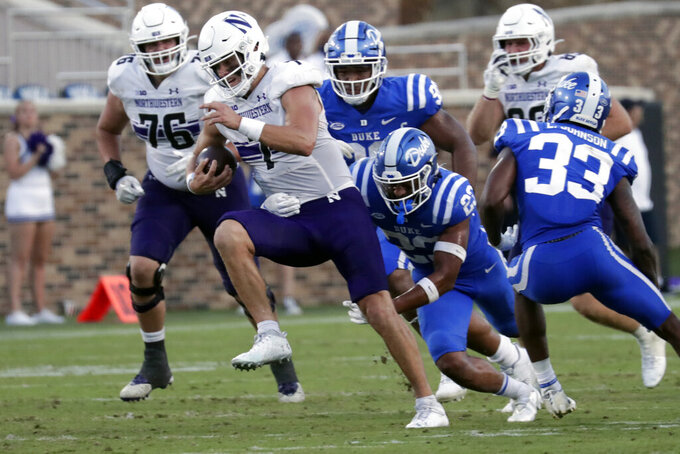 Having shuffled through three quarterbacks last week, there was one big question hanging over Northwestern.

The Wildcats were not only trying to shake off another loss. They were trying to steady themselves at the most important position.

It wasn't clear if Hunter Johnson, Andrew Marty or Ryan Hilinski will get the call when the Wildcats host struggling Ohio on Saturday.

All three were listed as potential starters against the Bobcats (0-3) on Northwestern's depth chart. Marty gave the Wildcats a lift after Johnson struggled last week in a 30-23 loss at Duke, only to leave the game with an upper body injury in the fourth quarter. Hilinski then took over for him.

“I thought (Marty) came in and executed really well, gave us a spark and played fairly clean football there,” coach Pat Fitzgerald said. “Unfortunately, he got banged up. But I thought Andrew played really well.”

Johnson won a three-way competition prior to the season after backing up Peyton Ramsey last season. He was a bright spot for Northwestern (1-2) in a season-opening 38-21 loss to Michigan State, with three touchdown passes.

Johnson's status wasn't really in question after he threw for 66 yards in a win over Indiana State. But a rough outing last week changed that.

Johnson lost a fumble on a sack with the ball on the Duke 2, then threw three interceptions. They led to a touchdown and two field goals as the Blue Devils grabbed a 27-0 lead.

Marty came in late in the first half and immediately led a 75-yard TD drive.

He completed 11 of 16 passes for 151 yards and two touchdowns. He also ran for one and looked like he was on his way to another when he got stripped by Duke’s Dewayne Carter in the fourth and was injured on the play. Hlinski, who transferred from South Carolina this year, came in and threw for 34 yards.

The Bobcats have dropped their first three for the first time since an 0-4 start that included a 16-8 loss to Northwestern at Ryan Field in 2008. The two teams have not met in 13 years. This will also be Ohio’s first game against a Big Ten team since a loss to Purdue early in the 2017 season.

“Disappointment in the locker room? You bet,” coach Tim Albin said. “My heart hurts for them. But the kids are fighting. ... I'm disappointed. I'm not discouraged.”

Northwestern lost its top two tacklers from last season in linebackers Blake Gallagher and Paddy Fisher as well as a first-round draft pick in cornerback Greg Newsome II. So far, it's showing.

The Wildcats have already allowed 30 points or more twice. It's a big change for a program that boasted one of the stingiest defenses in the nation last season, allowing just 15.6 points per game. Northwestern never allowed more than 29 in winning the Big Ten West for the second time in three years.

Ohio boasts a 1,000-yard receiver in Cameron Odom and running back in O’Shaan Allison. Odom has 1,066 yards in five seasons. Allison, a redshirt junior, has 1,117 and has averaged 5.8 per carry in his career. He has 167 yards on 32 attempts this season.

Northwestern running back Evan Hull continues to deliver. The sophomore is averaging 6.4 yards per carry and has 262 on the season. He ran for 49 on 10 attempts last week after going for 126 in the win over Indiana State. Hull was thrust into the No. 1 running back spot after Cam Porter suffered a season-ending lower-body injury in camp.

With 195 yards on punt returns, Northwestern ranks third in the country. But the Wildcats had just three for 16 yards last week.

It was a big drop after Brandon Joseph and Raymond Niro III combined for a school-record 166 against Indiana State. Joseph ran back the first two of his career for 111, while Niro added 55.

Against Duke, Niro had two for 13 yards, and Hull ran one back for three.

Northwestern gets back to Big Ten play next week with a trip to Nebraska. The Wildcats are then off before hosting Rutgers on Oct. 16.