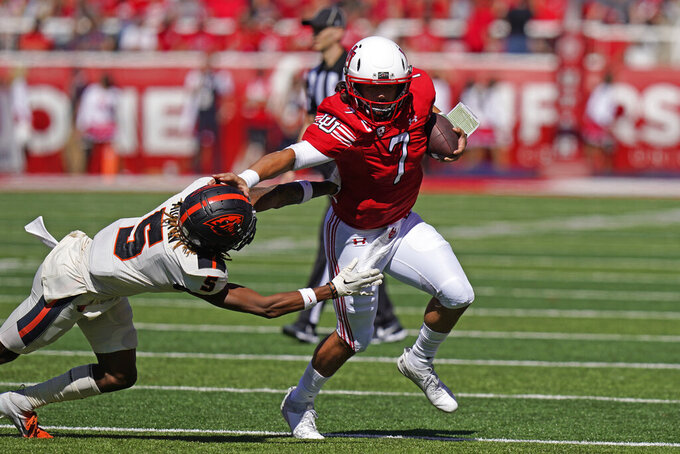 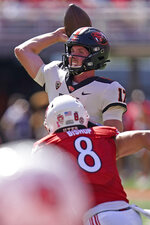 SALT LAKE CITY (AP) — Cameron Rising threw for 199 yards and three touchdowns and added 73 yards and a score on the ground to lead No. 12 Utah to a 42-16 victory over Oregon State on Saturday.

The Utes (4-1, 2-0 Pac-12) forced four turnovers to avenge their only Pac-12 loss from last season. It was the first time Utah finished with four interceptions in a game since a 52-45 victory over UCLA in 2016.

Two of those takeaways came in the red zone.

“We found our toughness,” senior safety R.J. Hubert said. “This team has guts, passion, they’re tough, and I love these guys.”

“I don’t want to say we took a step back, but we definitely didn’t take any steps forward,” senior safety Jaydon Grant said.

Utah broke open a close game with a pair of third quarter touchdowns. Devaughn Vele fought scored on a 16-yard catch. Then, R.J. Hubert picked off a pass from Gulbranson in the end zone and returned it 70 yards to set up Jaylen Dixon’s 22-yard scoring run.

A 4-yard toss from Rising to Dalton Kincaid gave the Utes a 42-16 lead early in the fourth quarter.

“There’s nobody who studies more film than Clark and that leads to big plays,” Whittingham said. “The more film you study, the more big plays you’re going to make.”

The Beavers answered on their next drive. Silas Bolden took a pitch and ran 29 yards untouched on a reverse to even the score. Phillips jumped a route for his second interception and returned it 38 yards to put Utah back in front midway through the first quarter.

“We noticed formational tendencies and (defensive coordinator Morgan) Scalley put us in position to be able to capitalize on that,” Phillips said. “I just so happened to be the outside corner on that (pick-six) play. As soon as I saw the ball snapped and the quarterback looked, I said this is the one and hopefully we score.”

Rising stiff-armed a defender, danced along the sideline, and dragged a would-be tackler to the pylon at the end of a 24-yard run to extend the Utes’ lead to 21-7 early in the second quarter.

Atticus Sappington made three field goals – two from 26 and one from 31 yards out – to help Oregon State trim the deficit to 21-16 early in the third quarter.

The Beavers never drew closer after ending a pair of second-half drives with end-zone interceptions.

“We can’t turn it over,” Oregon State coach Jonathan Smith said. “Again, I think we’ve got guys that can help us score points. We just got to do a better job of it.”

Utah: The Utes have forced a turnover in seven consecutive games. Utah scored its first 14 points off two takeaways, providing a cushion against a sluggish offense that went 3-and-out on four of the team’s first seven drives.

Rising finished as Utah’s leading rusher after averaging 10.4 yards per carry on only seven carries. Oregon State didn’t account for his elusiveness when plays broke down and the junior quarterback made the Beavers pay.

His 73 yards were his second highest total of the season – trailing only the 91 yards he gained in the season opener against Florida.

“I think a lot of people don’t really look at me as a runner,” Rising said. “Any chance I get, I like to take advantage of it.”

Utah forced a turnover on its opponent's opening drive for the second time this season. The Utes have not allowed an opponent to score on their opening drive in all five games so far.