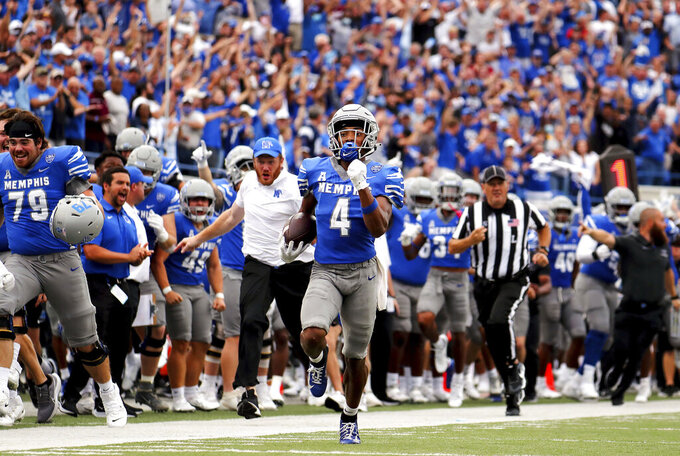 Mississippi State coach Mike Leach was still being asked his thoughts Wednesday about the bizarre punt play in the fourth quarter of last week's loss to Memphis, and two apparent mistakes — one of them acknowledged — by SEC officials.

Leach still wasn't sure he wanted to pay to discuss them.

Regardless, the situation on the same Saturday as another significant error by SEC officials in Auburn's loss at Penn State has put the men and women in stripes exactly where they never like to be: the spotlight.

“There is not a lot I can do differently. I clearly have some thoughts,” acknowledged Leach, whose team plays LSU this weekend. “I just have to figure out if I'm interest in making an investment in airing those thoughts. There is sort of a price to play this particular game. I kind of reserve the right to do that. It is still an option on the table.”

There might be no more difficult job in college football than officiating, particularly as teams have embraced wide open offenses, rapid substitutions, faster tempos and more exotic looks. And the reality is that the two plays that shone a nasty spotlight on the SEC on Saturday were but two of hundreds that its officials were forced to watch last weekend.

Still, they are also were mistakes egregious enough — particularly with instant replay available — that many coaches, players and fans are no doubt left wondering whether they can count on SEC officials to handle their games.

The more noteworthy mistakes, if only because it directly affected the outcome, came in the Bulldogs' game.

It happened with Memphis leading 21-17 and 5:58 left in the fourth quarter. The Bulldogs punted and two players made contact with the ball in an attempt to down it, though neither ever actually possessed it, and the back judge waved his arms over his head to signal the play was dead. But with no whistle blowing, the Tigers' Calvin Austin III alertly grabbed the ball and took off, running nearly the length of the field for a clinching touchdown.

The league said in a statement that Austin was allowed to pick the ball up because “the kicked ball remained live by rule, since it was not possessed by a player,” though more than a few would disagree with the interpretation. Where that was no gray area was this: The play should have been reversed because of the official's signal.

“The subsequent review would have placed the ball at the spot where the signal was made,” the SEC said.

Leach said he was told Saturday that all plays are reviewed, and that the punt play had already been confirmed.

Evidently, the officials doing the review also missed the fact hat Memphis had two players on the field wearing the No. 4, which is also a violation and should have resulted in a 5-yard penalty.

“It is extremely disappointing when student-athletes are not fully in control of a game's outcome,” Mississippi State athletic director John Cohen said, “especially when taking into consideration the time, effort and resources put into an officiating system created to eliminate human error on the field whenever possible.”

It didn't eliminate human error in Happy Valley, either.

Early in the second quarter, the officials simply forgot an entire down — all of them — and Penn State was forced to punt on third down. Not surprisingly, Nittany Lions coach James Franklin was still baffled after the game.

Good thing they won or he might have been downright irate.

The SEC had something to say: “The error was discovered during the media timeout that followed the punt,” the league said in a statement after the game, “and by rule it could not be corrected at that time.”

As far as Leach is concerned, at least make sure it's correct next time.

“Our team doesn't need to worry about that. We had ample opportunities to do things differently," he said while choosing to take a diplomatic approach. “The biggest thing is we need to worry about ourselves and what we think is most important. (The players) don't dwell on that at all. I handle that and our administration and the league — they handle that, and we focus on playing one play at a time. We've got to get better at that. That's the biggest thing.”