Smith leads big comeback for Tulsa over No. 19 SMU 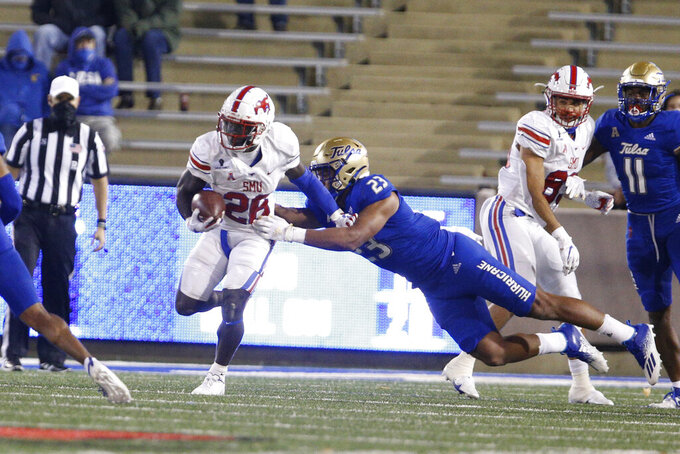 TULSA, Okla. (AP) — Tulsa once again managed to pull off an amazing comeback.

Zach Smith threw for 325 yards and three touchdowns to help Tulsa recover from a 21-point second quarter deficit and beat No. 19 SMU 28-24 on Saturday night.

After throwing an interception and losing a fumble that led to another touchdown on his first two possessions, Smith bounced back. He completed 26 of 38 passes, including a 4-yard touchdown toss to James Palmer with 2:11 remaining.

“The good thing about Zach is that he does bounce back,” Tulsa coach Philip Montgomery said. “He doesn’t let things weigh heavy on him. He’s resilient, he’s confident, he knows what he can do and it’s just about getting into that rhythm.”

T.K. Wilkerson rushed for 94 yards and a touchdown for Tulsa (4-1, 4-0 American Athletic). Keylon Stokes had eight receptions for 122 yards and Josh Johnson made eight catches for 101 yards and two touchdowns.

It was the third time this season the Golden Hurricane won after trailing by double digits in the first half, and the second time they did it against a ranked team. They trailed 23-5 against No. 11 UCF on Oct. 3 before rallying to win 34-26. It's the first time in Tulsa history they've had two wins over ranked opponents in the same season.

“We’ve been in this position before throughout the season and we’ve come back and won the game, so we knew we could do it,” Smith said. “There wasn’t any panic, there wasn’t any stress, we just had to come out and just start chipping away. It feels really good to get a win like that, especially being down by that much.”

For the fifth straight meeting, SMU and Tulsa played a game decided by six points or fewer, including an SMU triple overtime win last season.

Shane Buechele completed 18 of 36 passes for 200 yards and one touchdown, along with one interception, for SMU (7-2, 5-2), which missed an opportunity to move ahead of Tulsa into second place in the American standings.

Ulysses Bentley IV rushed for 103 yards and a touchdown for the Mustangs, who led 24-7 at halftime.

“We couldn’t do anything on offense,” SMU coach Sonny Dykes said. “Bottom line is we didn’t make plays. We didn’t execute at all. Just couldn’t make a play. You’ve got to give them credit. They made plays and we didn’t. It was just one of those games.”

The Mustangs entered the game averaging 526.3 yards of total offense per game, but Tulsa limited them to just 351, while also holding them to 4-of-16 on third down conversions. SMU didn’t score at all in the second half.

“We just went into the locker room and made good adjustments,” said Tulsa linebacker Zaven Collins, whose interception with 1:29 remaining sealed the victory, of the Golden Hurricane’s second half defensive performance. “It’s hard with an offense of that caliber, spotting them that many points in the first half. We just look at that as a challenge for us.”

After several previous games were canceled due to COVID-19 issues, Tulsa was playing just its second home game of the season in front of a socially distanced crowd of 3,940.

SMU: The Mustangs, who entered the game 10th in the nation with 13 takeaways, got two more on Tulsa’s first two possessions and they played a big role in their early lead. , Brandon Crossley recorded his team-leading fourth interception when he picked off Smith's pass and returned it 18 yards for the game’s first touchdown. Then Smith dropped the ball as he was about to pass, and Elijah Chatman recovered the fumble on the Tulsa 19. Four plays later, Buechele connected with Kylen Granson for a 22-yard touchdown pass to give the Mustangs a 14-0 lead.

Tulsa: The Golden Hurricane continued its frustrating habit of starting out slowly. Through five games, Tulsa has scored just 12 points in the first quarter and after gaining 59 yards of total offense in this one. They have committed seven of their 10 turnovers in the first quarter.

SMU, which had reached a high point of No. 16 after opening 5-0, should drop a few spots, if not all the way out of the Top 25. Tulsa, which received votes in the last poll, could vault into the Top 25.

It appeared Tulsa had squandered another opportunity to get back in the game late in the third quarter when Deneric Prince fumbled on the SMU 1 and Mustang Junior Aho recovered it in the end zone. SMU led 24-7 and the previous Tulsa possession had ended at the same 1 after Wilkerson was stuffed on 4th-and-Goal for no gain, turning over the ball on downs.

But this time, a video review determined that Prince was down before the ball came out, overturning the call. That gave the Golden Hurricane a first down on the 1 and two plays later, Wilkerson broke through for a touchdown, pulling Tulsa to within 24-14 with 2:51 left in the third.