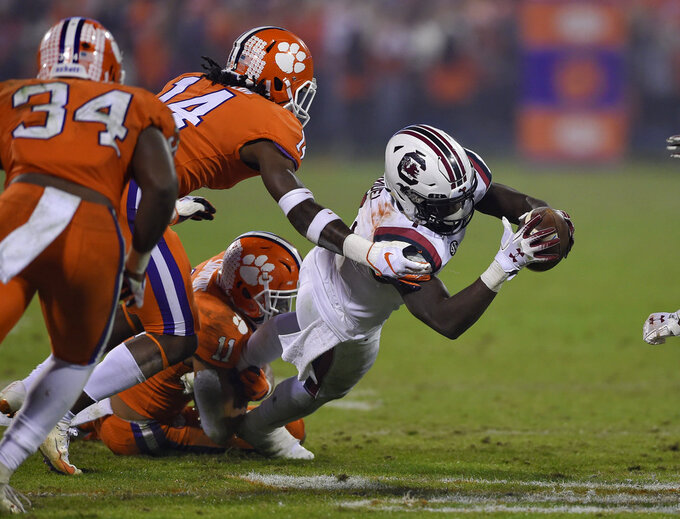 South Carolina's Deebo Samuels stretches out for a first down during the second half of an NCAA college football game against Clemson Saturday, Nov. 24, 2018, in Clemson, S.C. (AP Photo/Richard Shiro)

COLUMBIA, S.C. (AP) — South Carolina receiver Deebo Samuel says he is skipping the Belk Bowl so he can begin preparing for the NFL draft.

Samuel thanked fans in his announcement Monday on Instagram , but says it is time to support his family, adding "I realize the next 6 months will determine my next four years and potentially even more."

Samuel has shown flashes of brilliance while fighting injuries. He was responsible for 30 touchdowns in his Gamecocks career catching, running and returning kicks along with two TD passes and an end zone fumble recovery on special teams.

Samuel missed games his freshman year with hamstring problems and broke his leg in his third game of 2017 before deciding to return his senior year.

Samuel was a first-team Associated Press All-Southeastern Conference pick as an all-purpose player and a second team pick as a wide receiver.

The Gamecocks play Virginia on Dec. 29.