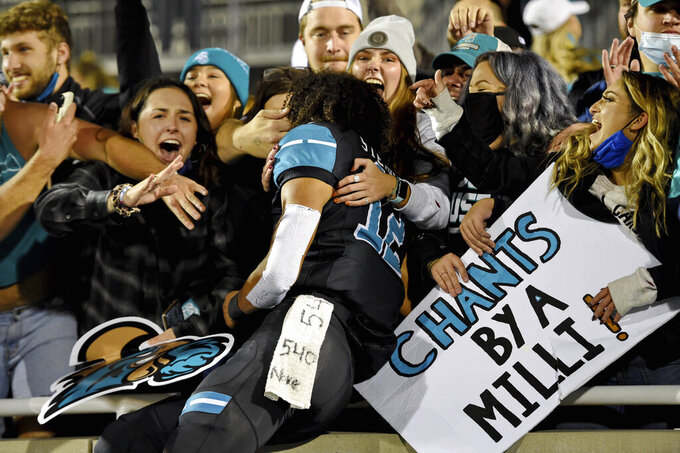 Coastal Carolina has already won the Sun Belt Conference’s East Division but is trying to complete its first perfect regular season. The Chanticleers also have a shot at climbing into the top 10. The Trojans could secure a winning regular season mark with the upset.

Coastal Carolina's running game against the Trojans' defense. Led by RB CJ Marable, the Chanticleers rank 15th nationally in rushing, averaging 227.9 yards per game. The Trojans defense has been middle of the pack in stopping the run, ranking sixth in the league and 63rd nationally (165.7 yards per game). Marable has two straight 100-yard games.

Troy: The Trojans haven't put up big rushing numbers, but they're 5-0 when freshman RB Kimani Vidal carries the ball at least nine times. He has averaged 82.4 yards in Troy's wins and just 19 in the three losses.

Coastal has outscored its conference opponents by 267-107, an average margin of 22.8 points per game. ... The Chanticleers held on for a 22-17 win last Thursday over then-No. 8 BYU, with two straight stops at the 1. Mateo Sudipo tackled Dax Milne at the 1 as time ran off. ... Coastal is the highest-ranked team to play at Troy, and the fourth Top 25 opponent at the Vet. ... Troy linebacker Carlton Martial’s career average of 8.65 tackles per game is tops among active FBS players. ... Troy has scored four defensive touchdowns, which leads the nation, and had one in three straight games. ___