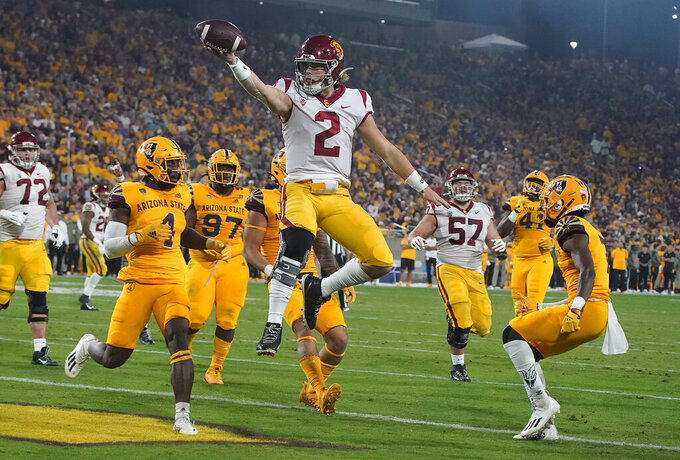 The Trojans' 18-year-old freshman quarterback realizes he's about to get a crash course in the emotions and excitement of Los Angeles' crosstown showdown.

Dart will make his first career start for USC (4-5, 3-4 Pac-12) on Saturday at the Coliseum against the Bruins (6-4, 4-3). Third-year starter Kedon Slovis is still sidelined by a lower leg injury, clearing the way for Dart to fully take charge of the Trojans' offense after three appearances this season in relief.

“I wouldn't really expect my first start to be in a rivalry game like this," Dart said. “All the emotions and the history of it all. I'm just super excited for the opportunity, and I'm ready to go.”

A USC quarterback hasn't made his first career start against UCLA since Scott Tinsley did it in 1980, but Dart isn't completely new. He already got a good bit of playing time this season despite missing time after having surgery for a torn meniscus in his right knee in September.

Dart made an electric debut two months ago at Washington State, coming on in relief of an injured Slovis to pass for 391 yards and four touchdowns despite injuring his own knee in the first half. Dart was out for the next month, but he returned for the Trojans' past two games.

“All it comes down to is I’m getting more reps now, so I’m able to get a better rhythm and get the feel of the offense a lot better,” he said.

Dart is used to doing surprising things: He ended up at USC after he transferred to a new high school for his senior season and promptly became the nation's leading passer and the Gatorade National Player of the Year.

With plenty of attention late in the recruiting cycle, he ended up choosing USC over suitors including UCLA. Dart was impressed by Chip Kelly and by Jason Kaufusi, the Bruins' outside linebackers coach, who played at the University of Utah alongside Dart's father, safety Brandon Dart.

Despite his youth and lack of local ties, Dart has made himself right at home on USC's downtown campus. Dart’s emergence is a bright spot in a lost season for the Trojans, who went into limbo two months ago when athletic director Mike Bohn fired coach Clay Helton two games into his seventh season in charge.

“Young kid coming from out of state, but he just fit right in," center Brett Neilon said. “He's friends with everyone in the whole locker room, and then when he stepped up in Washington State, it seemed like he’d already had a handful of starts under his belt. Being only 18 and leading some guys who are in their 20s is pretty great.”

“I just want him to step on the field and lead us like I know he can,” Williams said.

When Dart was healthy again, Williams implemented a two-quarterback system for both games in which both Slovis and Dart were healthy, even though the arrangement didn’t make much sense to his players.

Williams has been elaborately coy this season about his players' injury status — even more so than the average college football coach — yet he already declared Dart his starter for Saturday, saying the decision was essentially made for him by Slovis' unavailability for practice.

“Jaxson is a very naturally confident kid, and he carries himself in a good way and expects things to go his way,” offensive coordinator Graham Harrell said. “That’s a big thing at the quarterback position.”

Dart got an extra week of preparation when the Trojans’ game at California last weekend was postponed to next month. After two full weeks running USC’s offense in practice, he’s ready to seize his moment on one of the Trojans’ biggest stages.

“I don't really see much pressure from the outside,” Dart said. “My expectation is to have a big game.”