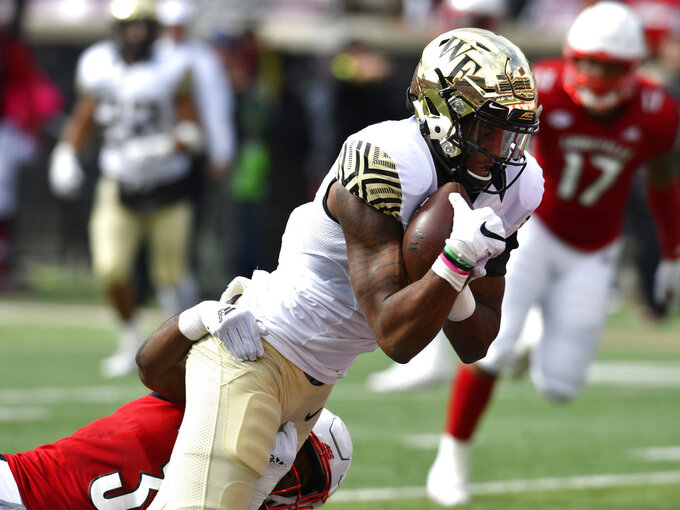 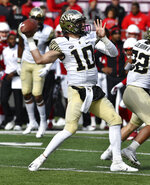 LOUISVILLE, Ky. (AP) — Wake Forest running back Matt Colburn II couldn't believe the space he had on many of his carries against Louisville.

While that says a lot about the Demon Deacons' run blocking, the senior did a lot in turning those openings into a career day against the school that pulled its scholarship offer.

Colburn rushed for career highs of 243 yards and three touchdowns, Sam Hartman threw two TD passes and Wake Forest rolled up a season-high 591 yards in a 56-35 rout of Louisville on Saturday.

A 2,000-yard career rusher with the Demon Deacons, Colburn said he had moved past Louisville rescinding his scholarship in what Cardinals coach Bobby Petrino chalked up to a numbers situation. Colburn made a statement nonetheless in surpassing his previous bests of 237 yards and two TDs last November against Syracuse.

"After my freshman year, I just wanted to get rid of the whole revenge narrative because if it wasn't for that I wouldn't be at Wake," Colburn said. "But it definitely is personal and it's really just the icing on the cake to go out like this and to get our season rolling again."

Said Petrino of Colburn, "I'm glad he had a good career. It was just one of those things where you got caught up in numbers and you had to ask somebody to redshirt."

The Demon Deacons (4-4, 1-3 Atlantic Coast Conference) had their way offensively in a high-scoring matchup of schools seeking their first league win. They scored TDs on five of their first six first-half possessions and broke 500 yards for the fourth time this season, the second in ACC play.

Colburn encountered little resistance from the Cardinals (2-6, 0-5). The senior ran for scores of 74, 56 and 12 yards on the way to his career best and finished with an average of 12.2 yards on 20 attempts.

Wake ended up rushing for 368 yards. Hartman completed 16 of 24 passes for 223 yards and TDs to Jack Freudenthal and Scotty Washington as Wake Forest beat Louisville for the second year in a row.

Hartman also ran for a 12-yard TD as the Demon Deacons ended a two-game losing streak.

"You hate to use the term must-win," coach Dave Clawson said, "but it was going to be really hard to accomplish any of our goals this year if we didn't find a way to get this one.

"Still gave up a lot of points and a lot of yards, but we played the game with a big lead and we did what we had to do. Anyway that we can find a way this year, we'll take it."

Louisville's Trey Smith rushed for a career-high three TDs and 98 yards on 13 carries. Jawon Pass added a career-best 358 yards passing and a TD, but the Cardinals (532 yards) were left playing catch-up after scoring on the game's opening drive.

Not quite what Louisville expected coming out of a bye.

"We didn't perform the way we needed to on defense today," said Petrino, whose team has its first five-game conference losing streak since the end of the 2008 season.

"Offensively, we did some good things but we weren't consistent enough to be able to win a shootout. That's what you have to do to win games."

Wake Forest receiver Greg Dortch had eight catches for 135 yards, including a one-handed 35-yarder that set up the first TD. "I saw it was a little out of reach," Dortch said, "so I just reached my one hand out there and it stuck. It was a great play."

Homecoming attendance appeared to be less than half the listed total of 49,603 tickets sold.

Wake Forest: Needing a boost after being outscored 101-20 losses to Clemson and Florida State, the Demon Deacons regrouped big against Louisville. They moved the ball at will against the Cardinals and at one point in the second quarter averaged 12.2 yards per play before finishing at 8.2. While their defense finished close to their ACC-worst average of 498 yards per contest, it stopped the Cardinals when needed and Carlos Basham returned a fumble 23 yards for a TD.

Louisville: The Cardinals thought they had corrected some flaws during their bye and began promisingly enough offensively with a game-opening TD drive. But their defense allowed Wake Forest to score on its first three possessions and things only got worse as they yielded at least 50 points for the second time in three games. Receiver TuTu Atwell's 132 yards receiving on eight catches set a school single-game record.

Louisville visits No. 2 and Atlantic Division leader Clemson on Saturday in search of its first league win against the Tigers.