2 quarterbacks again for No. 2 Clemson against Texas A&M 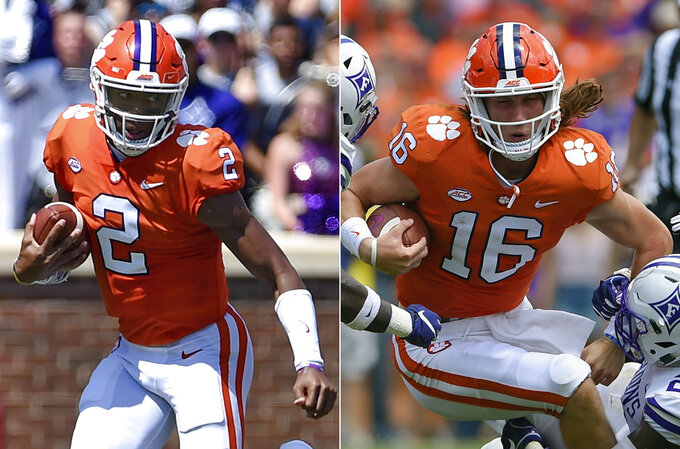 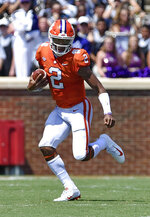 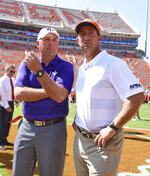 CLEMSON, S.C. (AP) — Calmly and clearly, Clemson coach Dabo Swinney shared how once more the second-ranked Tigers will use both senior Kelly Bryant and freshman Trevor Lawrence at quarterback at Texas A&M this week.

Both had good moments in a blowout win over Furman this past Saturday and both made mistakes, Swinney said. But neither gave the coaches any reason to stick them on the bench against the Aggies (1-0).
"We definitely will play both quarterbacks," Swinney said. "There's no doubt about that. Nothing happened to warrant not playing both those guys."
Bryant, last year's starter at Clemson (1-0), completed 11 of 17 passes for 132 yards and a touchdown. He also ran for a 35-yard TD. Lawrence, the 6-foot-6 strong-armed rookie, was 9-of-14 passing for 137 yards and three TDs, much to the delight of the packed house at Death Valley in a 48-7 win against Furman of the Football Championship Subdivision.
Co-offensive coordinator Jeff Scott said Monday it's not a two-quarterback system, just that the two quarterbacks are "part of the Clemson offense."
The play calls don't change depending on who's in, Scott said. It's not something he and fellow play-caller Tony Elliott consider much when piecing together the plan against Furman. Scott said he was driving home after Saturday's game when his mind flashed to Clemson's big plays and he needed check the tape to remember which quarterback was in for which.
"It is what it is right now," Scott said. "Let 'em go play."
Try telling that to fans, several who have a very definite opinion about Clemson's QB1.
Bryant is an efficient, skilled leader and dynamic runner who sometimes struggles with his downfield passes. Lawrence was a Georgia state prep record setter with a smooth delivery. It was the freshman who garnered more cheers on Saturday.
None of it matters to Bryant, who is confident in his ability and takes pride in being a mentor to Lawrence — just as former Clemson star Deshaun Watson brought Bryant along.
Scott said Bryant was first off the bench to congratulate Lawrence after the freshman's first TD pass. "We see that relationship all the time with them," Scott said.
Bryant acknowledged there's an adjustment from a year ago when he took nearly every snap, guiding Clemson to a 12-2 record and its third straight Atlantic Coast Conference title and College Football Playoff berth.
"It's different, but at the same time it hasn't changed, in my mind I'm still the guy," Bryant said.
Bryant said he'll stay locked into the game even on the sidelines, sharing his knowledge and experience on what he sees with Lawrence or any other Clemson quarterback. "I know they'd do the same for me," he said.
Bryant took responsibility for Clemson's slow start against the Furman. He misfired on a fourth-and-5 pass to Cornell Powell on the opening drive to turn the ball over to Furman. Bryant rallied the next time Clemson got the ball and finished the first-quarter drive with a 40-yard touchdown pass to Amari Rodgers.

Lawrence entered in the second quarter and led three straight scoring drives. His first college score was a 6-yard pass to Diondre Overton.
Lawrence is comfortable with the rotation. "I know that he started on Saturday and I came in after," Lawrence said. "Right now, that's where we're at and I'm going to keep working and playing well whenever I go in.
The freshman said he's rotated with Bryant and third-stringer Chase Brice throughout the spring, the summer offseason and fall camp. The coaches, he said, have done a good job keeping him informed every step of the way and prepared when his opportunities come.
He's also grateful to Bryant, who's made the transition easier with his willingness to help Lawrence learn. "It's helped a lot," Lawrence said. "It definitely would be a big stress if the guy in front of me was not taking it well."
___
More AP college football: https://apnews.com/tag/Collegefootball and https://twitter.com/AP_Top25