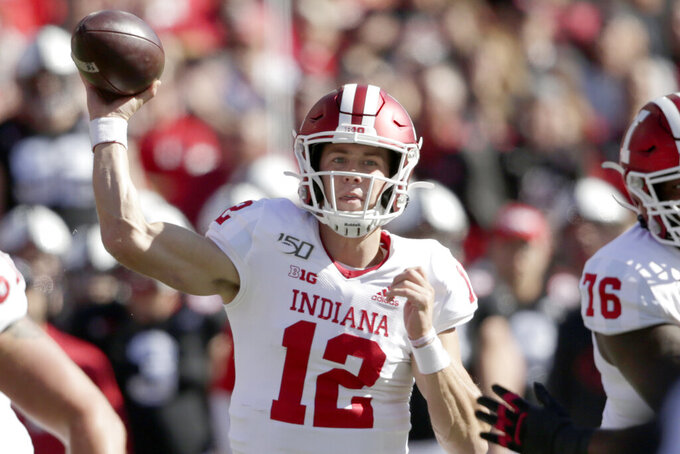 The questions at Indiana are no longer about bowl eligibility. Instead, everyone wants to know how high they can go.

"We have not had a ton of conversations about bowl games and six wins. We just did not," coach Tom Allen said Monday during his weekly news conference. "I know the guys recognize, they knew when we won the game that we were bowl eligible, but that was never the goal — just to get to six. It is a great relief, in some ways, to get that out of the way."

It's a huge achievement for a team that came up one win short of making the postseason during each of Allen's first two seasons at the helm.

Now, though, Indiana's success is prompting some outsiders to rethink how they view the program.

For the first time since 1993, the Hoosiers (6-2, 3-2 Big Ten) have won three straight conference games in the same season. They've also won back-to-back league games on the road, too. They're tied with No. 14 Michigan for third in the Big Ten East, trailing only the two unbeaten teams — No. 3 Ohio State and No. 5 Penn State.

They even received four points in Top 25 balloting, moving a step closer to ditching the dubious title of longest poll absence among power-five schools. Indiana's last appearance came in September 1994 when they crept in at No. 25.

Winning one of their last four games would assure the Hoosiers of their first non-losing season since 2007 and two would produce their highest victory total since 1993.

Allen has publicly stated one of this season's goals was winning a bowl game, something Indiana last did in the 1991 Copper Bowl, and outsiders are wondering what bowl games might be in play with a couple of more wins. Allen wants his players focused on the next game.

Allen acknowledged he is contemplating how to some freshmen more playing time without burning a potential redshirt seasons. The biggest obstacle over the next month could be health.

Allen announced his son, linebacker Thomas Allen, will miss the rest of this season with what he described as a "very serious" shoulder injury. The younger Allen has been a key defensive player and is scheduled to have surgery next week.

Starting quarterback Michael Penix Jr. continues to deal with nagging injuries that have kept him out of three games this season. Backup Peyton Ramsey, who started the previous two years before losing the job in summer camp, is now 2-1 in place of Penix. Ramsey is 5-1 in the games he's played this season and he finished Saturday's game despite taking a hard shot to the sternum.

So while Allen says Penix remains No. 1 on the depth chart, he's not ready to say who will start against the Wildcats.

"Mike's our starter, and Peyton's done a phenomenal job, but if Mike can't go, Peyton's going to go," Allen said. "And as we all know, Peyton's going to do a great job. I have absolute confidence in Peyton. We don't know exactly yet what this week will hold, who will be the starter, but whoever it is, we'll be ready."