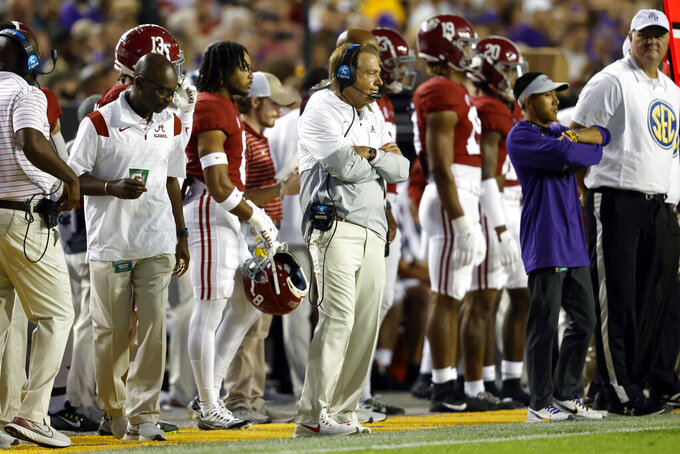 The year was 2007 and Alabama was still looking more like a college football has-been than a program on the cusp of a dynasty.

Nick Saban's first regular season as the coach of the Crimson Tide ended with a four-game losing streak that included a loss to Louisiana-Monroe.

That was the last time Alabama lost consecutive games in a regular season.

Coming off a one-point loss to LSU in Death Valley, the Crimson Tide hit the road again to face another ranked team and avoid their first two-game skid in 15 years.

No. 11 Mississippi and former Saban assistant Lane Kiffin welcome the Tide on Saturday.

For the second straight year, both teams are ranked going into their game. Last season, Kiffin urged fans to grab their popcorn before kickoff. Then Alabama went up 28-0 at the half.

Maybe this game will be more popcorn-worthy. Considering the state of the Tide, it makes the list of the five most intriguing games of Week 11.

Putting aside that this is a pivotal game in the Big 12 for both the first-place and unbeaten Horned Frogs and the tied-for-second Longhorns, there are some juicy storylines. Can TCU repel another departing Big 12 flagship school? Can former Frogs coach Gary Patterson, now special assistant to the head coach at Texas, extract some revenge after he was pushed out last year?

Another negative Alabama would like to avoid: The last time the Tide lost three regular-season games was 2010. Ole Miss' shaky defense should provide a boost for an inconsistent Alabama offense. If the Rebels' potent running game keeps cranking, could be a first-to-50 game.

No. 15 North Carolina at Wake Forest

No. 7 LSU at Arkansas

Tigers coming off a huge win. Hogs coming off being upset at home by Liberty. An 11 a.m. local kickoff. One team unexpectedly thrust into a conference championship race. The other looking to play spoiler and turn around a disappointing season. And look at that line? Tiger trap.

The Hawkeyes' offense has come to life the last two weeks, but expect this to be another slog for both teams. There should be no other way for a Big Ten West eliminator.

The rest of the games involving ranked teams, with lines by FanDuel Sportsbook:

Bulldogs plays defense like Alabama and Mike Leach's Air Raid has managed 15 points in three games against the Tide ... GEORGIA 31-10.

Weather forecast looks good in Columbus and the Buckeyes are probably a little tired of hearing about getting bogged down in the wind last week ... OHIO STATE 63-17.

How will Vols respond after wild few weeks of enormous games ... TENNESSEE 38-21.

Bruins looking to drop 50 on a Grand Canyon State school for a second straight week ... UCLA 48-24.

Cardinals have won four straight to right their season behind an improved defense ... CLEMSON 24-20.

Both sides have to win a few for it to be a rivalry and the Terps have done that only three times in 45 tries ... PENN STATE 31-24.

Not an exaggeration to call this one of the biggest home games in Tulane history ... UCF 24-20.

In a terrible season, Eagles might have found their quarterback of the future in Emmett Morehead ... N.C. STATE 28-7.

Huskies need one more win to get bowl eligible; Jim Mora for coach of the year? ... LIBERTY 24-13.

Irish have proved capable of playing down to a supposedly overmatched opponent ... NOTRE DAME 28-14.

Illini can't clinch the Big Ten West, but they'd be awfully tough to catch with a win ... ILLINOIS 27-17.

Banged up Orange are sputtering while Seminoles seem to be hitting their stride ... FLORIDA STATE 34-20, BEST BET.

Barometer game for the Gators; Rarely can Florida claim a good season if its loses to the Gamecocks ... FLORIDA 27-23.

Who had the 'Canes and Jackets both fighting for bowl eligibility at this point? ... MIAMI 23-20.

Injuries have made Cowboys' QB situation a mystery ... OKLAHOMA STATE 24-21.

East Carolina at Cincinnati (minus 5) — @doughnutduncan

Bearcats won the last two meetings at Nippert Stadium by a combined 111-23; This will be closer ... CINCINNATI 27-20.