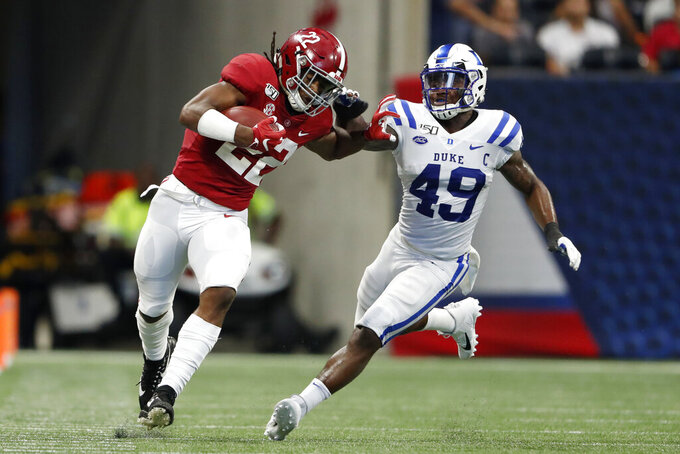 Alabama running back Najee Harris (22) tries to fend off Duke linebacker Koby Quansah (49) during the first half of an NCAA college football game, Saturday, Aug. 31, 2019, in Atlanta. (AP Photo/John Bazemore)

DURHAM, N.C. (AP) — Duke hopes it learned a few things against No. 2 Alabama that will help the Blue Devils the rest of the season.

They look to bounce back from that blowout loss when they play host to North Carolina A&T of the FCS on Saturday night in their home opener.

Coach David Cutcliffe said the Crimson Tide gave Duke a lesson in tenacity during that 42-3 loss in the Chick-fil-A Kickoff Game in Atlanta. As hard as the Blue Devils (0-1) thought they played in that game, Alabama exceeded them.

"That's what really great football teams do, is you find a way to play harder than your opponent, no matter how hard they play," Cutcliffe said. "If we take that challenge . that's the game. That's where it lives, that commitment to a level that you see it on tape. We'll see where we go with it."

The Blue Devils spent virtually the entire offseason focusing on Alabama and the huge challenges that came with opening against a perennial College Football Playoff team.

Now that they're past that one, they can't afford to let the Tide beat them twice.

And while Duke transitions from heavy underdog to heavy favorite, North Carolina A&T (1-0) figures to at least give them more of a test than the only other Mid-Eastern Athletic Conference school they've faced. Duke has gone 7-0 against crosstown foe North Carolina Central, winning those games by an average of 52 points.

The Aggies, ranked No. 14 in the FCS coaches' poll, beat Elon 24-21 after Noel Ruiz kicked a school-record-tying 52-yard field goal as time expired. Three times in the past four years, A&T has won the MEAC and went on to win the Celebration Bowl.

"They're a great program, not just having a great team," Cutcliffe said. "They are champions. They do what champions (do). . They were MEAC champions for a reason."

Some other things to know about the North Carolina A&T-Duke game:

Duke DT Edgar Cerenord will miss the first half after he was ejected from the Alabama game. He stepped on Tide OL Landon Dickerson after the play was whistled dead, earning a personal foul penalty and an ejection. Cutcliffe says he met with his defensive tackle the day after the game and said frustration boiled over. "I'm disappointed — just kind of an understatement," the coach said.

A&T has knocked off FBS teams in each of the last three seasons. The Aggies started their run by topping Kent State 39-36 in quadruple overtime in 2016, took down Charlotte 35-31 a year later and knocked off East Carolina 28-23 last year.

Duke is 9-2 in home openers in Cutcliffe's first 11 seasons at the school, and has won seven of them in a row since Richmond knocked off the Blue Devils in 2011.