Grier looks for win in final home game for No. 12 WVU 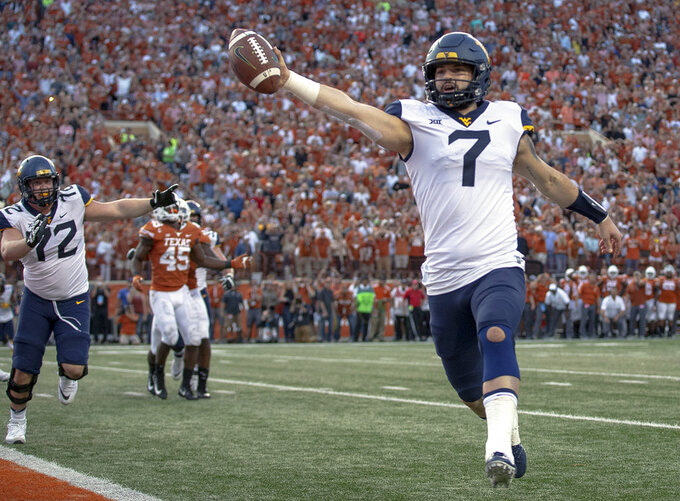 FILE - In this Nov. 3, 2018, file photo, West Virginia quarterback Will Grier (7) scores the game-winning two-point conversion during an NCAA college football game against Texas, in Austin, Texas. Grier, a senior, will play in his final home game Friday night, Nov. 23, when No. 12 West Virginia hosts No. 6 Oklahoma. (Nick Wagner/Austin American-Statesman via AP, File)

West Virginia quarterback Will Grier finally is getting his shot at playing Oklahoma.

Grier missed last year's meeting with a broken finger and the Mountaineers were blown out in Norman, Oklahoma. The senior will play his final home game Friday and can send No. 12 West Virginia (8-2, 6-2 Big 12) into the Dec. 1 league championship game with a win over the sixth-ranked Sooners (10-1, 7-1).

Grier has been mostly solid during an up-and-down season in which he has fallen back from preseason Heisman Trophy chatter. Now he'll get a chance to outplay one of the Heisman Trophy favorites, Oklahoma's Kyler Murray.

Both were named Maxwell Award finalists on Monday, along with Alabama's Tua Tagovailoa. The award is given to the nation's top player. Murray also is a finalist for the Davey O'Brien Award as the top quarterback.

Grier and Murray started their college careers in the SEC, Grier at Florida and Murray with Texas A&M. Grier left in 2015 after he was suspended for one year for violating the NCAA's policy on performance-enhancing drugs.

Oklahoma coach Lincoln Riley got to know Grier's family when Riley was an assistant coach for five seasons at East Carolina and Grier starred under his father-coach Chad Grier at Davidson Day School near Charlotte, North Carolina.

Grier missed most of the final three games a year ago, then decided to return for his senior year with the bulk of the offense coming back. This season he's fourth nationally with 332.5 passing yards per game and is fifth in touchdown passes with 33.

"He's having a year that I think everybody expected he would have," Riley said. "I'm really proud of him. He's smart. He knows where he wants to go with the football. He's extremely accurate. He knows who his playmakers are. He's got a good feel for the game."

The offense struggled at times earlier this season to score and move the ball. West Virginia is averaging 47 points over its last four games. Against Texas, Grier threaded a 33-yard TD pass to Gary Jennings in the back of the end zone with 16 seconds left, then Grier ran in the clinching two-point conversion in the 42-41 win .

The Mountaineers are coming off a 45-41 loss at Oklahoma State on Saturday, a setback that's been quickly forgotten with so much at stake this week.

A huge fan favorite, Grier said he typically doesn't get worked up before or during a game. Friday night could be a challenge emotionally.

Not only is the title-game berth at stake, it's the last time at Mountaineer Field for Grier and 16 other seniors, including wide receiver David Sills. Grier and Sills have combined for 31 TD passes since the start of the 2017 season, the most in the Bowl Subdivision over that span.

"Definitely this place is home," Grier said. "I've given my life to this place and tried to represent the state and the program the best I can. I graduated from here. I've lived here. My daughter was born here. There's a lot of things that mean a lot to me about this place.

"I wish it wasn't my last one, but it is and you've got to move on. I hope I go out on top. I will represent this place for the rest of my life."