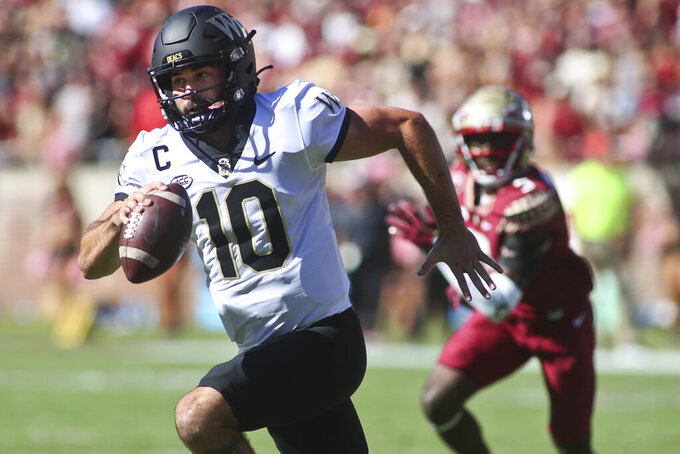 Wake Forest quarterback Sam Hartman (10) runs out of the pocket in the first half of an NCAA college football game against Florida State Saturday, Oct. 1, 2022, in Tallahassee, Fla. (AP Photo/Phil Sears) 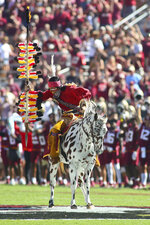 He also knew they had put it behind them by the time they took the field for another top-25 matchup with Florida State.

Sam Hartman threw for 234 yards and two touchdowns, Justice Ellison ran for 114 yards and a touchdown and No. 22 Wake Forest beat the No. 23 Seminoles 31-21 on Saturday.

“That was a great, gutty, incredible team win,” Clawson said. “Last week was a soul crusher and I certainly had concerns with our ability to get them back. They just put in a great week of work and prepared, and came down here expecting to win.”

Wake Forest (4-1, 1-1 Atlantic Coast Conference) looked focused early, scoring touchdowns on three straight drives after an opening punt. The Demon Deacons ran for 171 yards, their most against an FBS opponent in 2022, while Hartman connected with eight receivers. A.T. Perry led the way with eight receptions for 91 yards and a touchdown.

The Demon Deacons also converted 7 of 11 third downs and 2 of 2 fourth downs in the first half as they grabbed a 21-7 halftime lead.

Jordan Travis connected with Mycah Pittman on touchdown receptions of 18 and six yards as the Seminoles opened both halves with TD drives. Travis completed 23 of 35 passes for 281 yards and three touchdowns.

The Seminoles (4-1, 2-1) got within 28-21 with a 58-yard drive in the fourth quarter, which culminated in Travis’ 4-yard TD throw to Johnny Wilson and a two-point pass. But the Demon Deacons responded again with a long drive, ending in Matthew Dennis’ 27-yard field goal to give them a 31-21 lead with 2:55 left.

An Oregon transfer, Pittman had career bests with five receptions and 85 yards.

Florida State’s offense had its moments, but Travis’ fumble gave Wake a short field and set up a Demon Deacons touchdown. Another Seminoles drive set up Ryan Fitzgerald for a 29-yard field-goal attempt, which he missed. Florida State also started a drive at its 45 with the benefit of a long kickoff return but went three-and-out.

“Disappointed,” Florida State coach Mike Norvell said. “I thought our guys, especially there in the first half, really started almost pressing when we had a little bit of adversity that showed up, did a lot of uncharacteristic things, uncharacteristic mistakes showing up. Way too many penalties. Turnovers, balls were in jeopardy. You look at the third-down situations on both sides, they did a really good job in those critical down situations. I think they were 13 out of 21 of third and fourth downs.”

Wake Forest had been converting just 41% of its third-down opportunities coming into the game, while FSU’s third-down stop rate was 31.5%.

The Demon Deacons flipped the script and used those third-down conversions to build lengthy scoring drives. Wake had touchdown drives of 80, 90, 75 and 39 (a short field off the Travis fumble) and also a final 66-yard drive that took 6 1/2 minutes off the clock and resulted in Dennis’ 27-yard field goal with 2:55 to go.

Hartman moved into fifth place on the ACC's career list with 10,462 passing yards.

Wake Forest: The Demon Deacons put together touchdown drives of 80, 90 and 75 yards, with a final 71-yard drive that resulted in a field goal. Wake also converted 10 of 18 third downs for the game.

Florida State: The Seminoles could not overcome a season-high 11 penalties and a fumble by Travis, which set Wake up with a short field and resulted in a touchdown in the second quarter.

Florida State: Travels to No. 10 North Carolina State next Saturday.