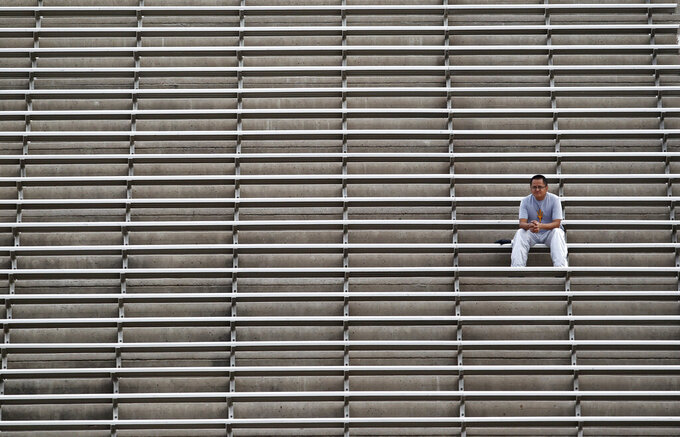 FILE - In this Nov. 17, 2012, file photo, an Arizona State fan is all alone in the upper deck during an NCAA college football game against Washington State, in Tempe, Ariz. As lock-downs are lifted, restrictions on social gatherings eased and life begins to resemble some sense, sports are finally starting to emerge from the coronavirus pandemic. Many college and pro sports teams already were dealing with declining ticket sales. The improved at-home experience, the emergence of wide-spread legalized betting and the changing social makeup of fan bases have been catalysts, while dynamic pricing, increases in parking and concession prices and a push toward luxury seating have exacerbated the problem.(AP Photo/Ross D. Franklin, File)

Clemson said 28 athletes or staff members have tested positive for COVID-19 since returning to school June 8.

Clemson has administered 315 tests since the school was given the green light to resume on-campus athletic activity.

The state of South Carolina set a high-water mark for coronavirus cases in a single day, identifying 1,081 on Friday.

In a release posted on the team’s Twitter account, general manager Julien Brisebois announced the players are self-isolating and are asymptomatic other than a few experiencing low-grade fevers. Anyone who may have been in contact with the individuals has been notified.

The team did not identify the players; it brings the count up to 13 NHL players having tested positive since the season was paused on March 12.

The move to open facilities was the next step in the NHL’s bid to resume its season with a proposed 24-team expanded playoff format, with games being played in two hub cities.

The NHL projects teams to open training camps on July 10.

The Tennessee Volunteers have their first positive test for COVID-19.

Tennessee announced that a member of the men’s basketball team, who was not identified, tested positive after several members of both the men’s and women’s basketball teams were tested. Players from both teams started returning to campus Monday. The Vols are coached by Rick Barnes, who will be 66 in July.

Tennessee football coach Jeremy Pruitt said Thursday that none of his returning players had tested positive, though a graduate assistant did test positive and went into self-quarantine.

Members of UConn’s men’s basketball team returned to campus Friday, with the school beginning preparations to reopen after shutting down because of the pandemic.

The school has not set a date for the return of the women’s basketball team but says football players will return to Storrs on July 1.

The plan for men’s basketball and football was submitted to the state’s Higher Education Committee as a pilot program. The school says that would allow it to solidify policies and procedures before the student body returns in mid-August.

The Nebraska athletic department is reducing its 2021 budget 10% because of projected revenue shortfalls tied to the coronavirus pandemic.

Nebraska’s budget was $140 million last year, meaning it is looking to save about $14 million this year, the school said.

Athletic director Bill Moos said 10 percent of administrative positions across the department will be eliminated, and teams will schedule more regional nonconference games to reduce travel costs. There will be no merit raises or increases in sports programs’ budgets.

Staff travel will be restricted, except for recruiting, and summer programming for athletes will be limited in 2021.

“While many of these necessary changes are difficult, especially those impacting our employees, we hope that they will be the only ones necessary in the months ahead,” Moos said. “I am confident that we will weather the storm.”

Western Hockey League teams need their arenas at least half full next season to operate, according to the league’s commissioner.

The COVID-19 pandemic has shut down large gatherings across North America over concerns of the spread of the virus. Some sports leagues are planning to return with games in empty stadiums and arenas.

Major junior hockey is ticket-driven and doesn’t have a lucrative broadcast rights deal to fall back on, WHL commissioner Ron Robison said Thursday.

The WHL consists of 22 teams spread across Canada’s four western provinces, plus Washington and Oregon.

The European Tour won’t have a senior circuit this year.

The Staysure Tour for players 50 and older announced Friday it has canceled the season because of the COVID-19 pandemic. It was supposed to start May 14-16 in Austria. Three senior majors on its schedule -- the Senior PGA, the Senior U.S. Open and the Senior British Open -- already had been canceled by other organizations.

Mark Aspland, the head of the Staysure Tour, said along with complexities of international travel, the tour had to recognize the additional risk related to the tour’s age demographic.

All player exemption categories this year will be extended to the 2021 season.

Texas Motor Speedway is planning to have some fans in its massive grandstands when NASCAR runs its rescheduled Cup race there July 19.

Texas Gov. Greg Abbott has approved a comprehensive action plan to allow fans for the race in Forth Worth. The track said the grandstands and suites would be open to fans, who would be subject to social distancing requirements and additional protocols.

It wasn’t immediately clear how many tickets would be available for the race at the 1 ½-mile track that was originally scheduled March 29. There are more than 110,000 grandstand seats.

Abbott had previously said that outdoor sporting events with spectators in Texas could be conducted at 50% capacity.

The announcement Friday comes as Texas continues to set record highs in the numbers of new coronavirus cases and hospitalizations since Memorial Day.

On Thursday, the state set a new one-day high with 3,516 new cases of coronavirus, and 2,947 hospitalizations, which nearly doubled the number in hospitals over the holiday weekend. There have been 2,132 confirmed deaths from coronavirus in Texas, according to Johns Hopkins University.

The second-tier United Soccer League Championship is preparing to resume its season on July 11 after reaching an agreement with the USL Players Association.

The 35-team league had just played its season openers when play was stopped in mid-March because of the coronavirus pandemic.

The league says it will resume negotiations with the union on what would be their first collective bargaining agreement.

Soccer players’ union FIFPro wants players to be given mandatory breaks because match congestion caused by the coronavirus pandemic is likely to last through 2022.

FIFPro warns of a “first spike in injuries because of insufficient preparation time and congested match schedules” since soccer restarted last month.

The Netherlands-based union says “the impact of COVID-19 means the match schedule will be even more intense over the next two years.”

The union asks for vacation periods of at least three weeks before starting preseason practice and a “mandatory mid-season break of between 10 and 14 days.”

FIFPro says “now is the time to apply this to player health.”

Thousands of Napoli soccer fans who poured into the streets to celebrate the team’s Italian Cup title without social distancing have been criticized by health officials as being “reckless.”

World Health Organization assistant director general Ranieri Guerra says he was reminded of Atalanta’s Champions League game with Valencia in February. That match is believed to have been a key factor in why the virus has been so deadly in Bergamo.

Guerra says “we can’t allow this.”

Fans in Naples flooded into central piazzas and set off fireworks to celebrate shortly after Napoli beat Juventus in an empty stadium in Rome on Wednesday.

Nearly 35,000 people have died in Italy from the coronavirus. The Campania region that includes Naples has accounted for 431 of those deaths.