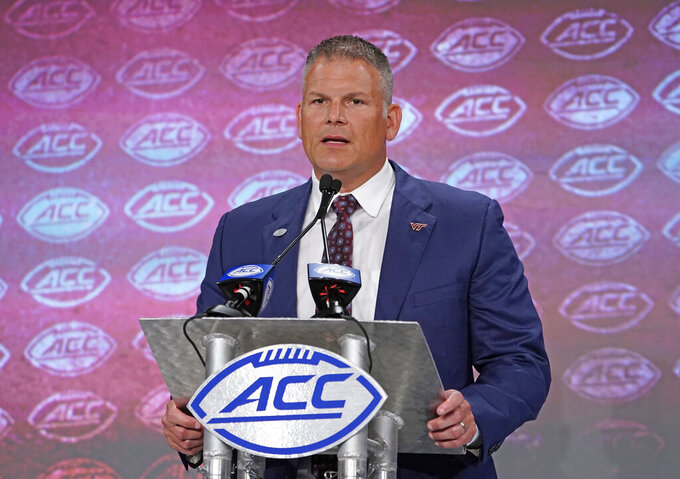 Virginia coach Bronco Mendenhall says the team is placing an increased emphasis on what he calls "critical moment" situations in spring practice.

The Cavaliers lost two games late last season in overtime to Georgia Tech and Virginia Tech costing them a chance at a 10-win season and a major bowl bid. However, Mendenhall said Thursday during ACC media days that his team is showing it can learn from those mistakes, as evident by shutting out South Carolina 28-0 in the Belk Bowl.

Mendenhall says he's stealing a page from Virginia's national championship basketball team, talking to his team about the importance of focusing in on key moments. However he says it's very much about experience and his team is "still in the learning phase."

Collins was jumping around, excited and full of energy when he first spoke to players at a team meeting after being named head coach. Curry says Collins joked with players "this is the most dull I'll be."

Curry said Thursday during ACC media days that his coach has lived up to word.

Curry says Collins' energy and enthusiasm is "through the roof," whether it's the middle of the day or 4 o'clock in the morning. The linebacker says it's not usual to see Collins, who was known as the "Minister of Mayhem" as a college player, running around and chest-bumping his players.

Curry laughs at the notion of being excitable, saying "I don't know any other way to be."

While Brown says he wants to use principles of the "air raid offense" that coach Mike Leach helped popularize at Texas Tech, Brown says North Carolina will also place a huge emphasis on a power running game.

Brown added Thursday during ACC media days that the Tar Heels "probably need to change the name" of his offense because people view Leach's offense as one that throws the ball all of the time.

Brown says, "we're not doing that."

UNC's quarterback position remains up for grabs. Early on in spring practice all three potential starting QBs —Sam Howell, Cade Fortin and Jace Ruder— were struggling with making decisions at the line of scrimmage. So he's placed an emphasis on the trio learning the offense, instead of worrying about competing for a job.

Chazz Surratt, who started seven games at QB in 2017, has moved to linebacker.

Pitt coach Pat Narduzzi believes kicker Alex Kessman gives the Panthers a leg up on the competition in the ACC.

The 6-foot-3 Kessman led the Panthers in scoring for a second consecutive season in 2018 with a career-high 79 points on 13 of 17 field goals, including a school record four field goals from 50 yards or more. He also made 40 of 42 extra points.

Kessman's 55-yard field goal at Heinz Field in Pittsburgh is the longest by any kicker — college or professional.

In close games, Narduzzi says Kessman's accuracy and leg strength is a tremendous weapon and feels he can be the difference between winning and losing, saying "as long as he has a good snap, a good hold, there's a real good chance that ball is going through the upright."

Narduzzi says Kessman has an explosive leg and a confidence and swagger that he attributes to being a former boxer.

Virginia Tech coach Justin Fuente says he's not ready to name a starting quarterback until after he knows if Oregon transfer Braxton Burmeister will be eligible to play this season for the Hokies.

Burmeister is petitioning the NCAA for immediate eligibility, but there has not been a ruling yet. Fuente expects one fairly soon.

Junior Ryan Willis would appear to be the frontrunner for the job on paper, but Fuente said Thursday during ACC media days that "it wouldn't be wise to close the job before I know who is going to be able to compete." The 6-foot-4, 211-pound Willis appeared in two games last season and made his first start against Duke leading the Hokies to a 31-13 win by completing 17 of 27 passes for 322 yards and three touchdowns.

Fuente says he promised everyone a chance to compete for the job, so he is withholding any decision at this time.

New Miami Hurricanes coach Manny Diaz says there's little doubt about the strength of his team — it's his linebacker crew.

Shaq Quarterman, Mike Pinckney and Zach McCloud all arrived at Miami together three years ago as the team's starting linebackers and they will finish their careers together, too.

Diaz, who served as Miami's defensive coordinator and linebackers coach for the last three years before being named head coach, and touted the trio's wealth of experience. He said Thursday during ACC media days that "they have seen it all in college football" and predicts their leadership will have a trickle-down effect on the rest of the defense, as well as the team.

Diaz doesn't have that same luxury at quarterback, where he's says it remains unclear who'll start the season.

But he says he has confidence that new offensive coordinator Dan Enos, who came to Miami after serving as Alabama's quarterbacks coach last season. Under Enos in 2018, Alabama averaged 45.6 points per game and established an NCAA record for QB rating (199.4).

Disney-owned ESPN has deals in place with several providers to carry the ACC Network, including direct-to-customer services such as Playstation Vue and Hulu. But there are no deals in several key areas of the league's footprint ahead of the Aug. 22 launch.

The ESPN-directed messaging includes social media posts from school coaches and athletics directors encouraging fans to ask their providers to carry the channel.

The ACC hopes channel revenue closes a growing financial gap with its power-conference peers, with Swofford noting in an interview with The Associated Press that the ACC Network is "a big deal and it needs to work."

For now, the league largely must wait amid distribution negotiations.

Swofford says that process is "stimulating" but also "stressful," noting: "you can only do so much, and that's where we are at this point in time."

That's because he has fifth-year senior Quentin Harris ready to take reins.

Cutcliffe said Wednesday during ACC media days that he has "great confidence" in Harris, calling him a "brilliant" player who is well prepared to position the Blue Devils to compete for the Coastal Division title this season.

Cutcliffe says Harris has a great grasp of the team's pass play concepts and now it's only a matter of zeroing in on the plays he's most comfortable with. Harris should also get plenty of help offensively from running backs Brittain Brown and Deon Jackson, who ran for 847 yards last season — the most by a running back in the Cutcliffe era.

Replacing high-profile QBs is familiar territory for Cutcliffe, who previously helped Peyton Manning, Eli Manning and Heath Shuler become first-round NFL draft picks. Jones might have been the most surprising pick of the NFL draft, taken sixth overall by the New York Giants.

The Atlantic Coast Conference concludes its preseason media days Thursday with a focus on the always unpredictable Coastal Division.

The division hasn't produced a repeat champion since Virginia Tech won it in 2010 and 2011. That's left six of the seven division teams to earn a spot in the league championship game each year since, with Pittsburgh breaking through last season.

The only division team not to win it in that time is Virginia, though the Cavaliers return nine defensive starters from an eight-win team.

The division also features three new coaches in North Carolina's Mack Brown, Miami's Manny Diaz and Georgia Tech's Geoff Collins. For Brown, it's his second tenure with the Tar Heels after building a top-10 program from 1988-97 before his 16-season stint at Texas.