LSU working with NCAA to self-impose penalties for football 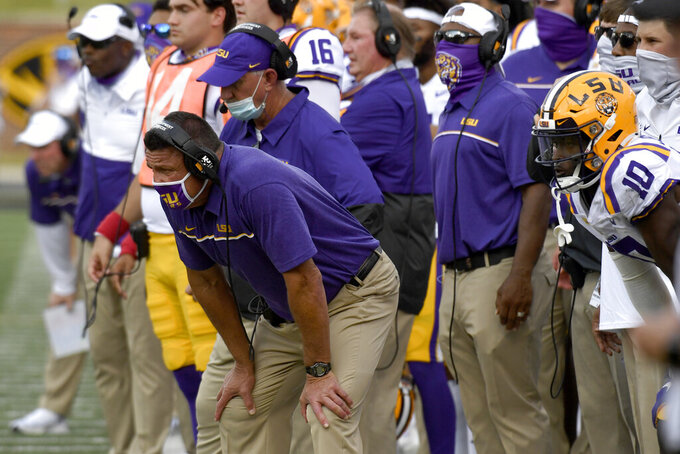 LSU head coach Ed Ogeron watches his team as his team fails to score a touchdown in the final seconds of their 45-41 loss to Missouri during second half of an NCAA college football game Saturday, Oct. 10, 2020, in Columbia, Mo. (AP Photo/L.G. Patterson)

BATON ROUGE, La. (AP) — LSU has self-imposed penalties for NCAA rules violations by the football program that include a reduction of scholarships and a two-year ban from its athletic facilities for Cleveland Browns star and former Tigers receiver Odell Beckham Jr., according to a report by Sports Illustrated.

LSU acknowledged it was working the NCAA and had self-imposed penalties, but provided no other details.

“LSU has worked proactively and in cooperation with the NCAA to identify and self-report any violations that occurred within our football program,” LSU senior associate athletic director Robert Munson said in a statement. “We believe these self-imposed penalties are appropriate and we will continue to coordinate and cooperate with the NCAA on this matter.”

The NCAA is not required to accept self-imposed penalties and could add to LSU's punishment.

Sports Illustrated reported LSU was working with the NCAA on three separate potential football violations, including a Level III (considered minor) violation for Beckham's handing out of about $2,000 worth of cash to Tigers players on the field after last year's College Football Playoff national championship game.

LSU and the NCAA have also been looking into a more serious violation stemming from a booster funneling $180,000 to the father of former LSU football player for a no-show job between 2012-17. Those allegations came to light during a federal case against an LSU booster, who pleaded guilty to stealing $550,000 from a Baton Rouge-based charity.

LSU self-imposed a reduction of eight football scholarships over two years for the Level I football violation, Sports Illustrated reported.

The NCAA is also currently investigating LSU basketball and coach Will Wade for recruiting violations that were uncovered during an FBI investigation into corruption in college basketball.

The NCAA said last month that an LSU infractions case would be resolved through the Independent Accountability Resolution Process instead of going through the usual process with the association's Committee on Infractions.

The IARP was established to deal with complex cases. Sports Illustrated reported the IARP would jointly consider LSU's football and basketball violations, even though the school has self-imposed penalties in football in an effort to resolve that case.