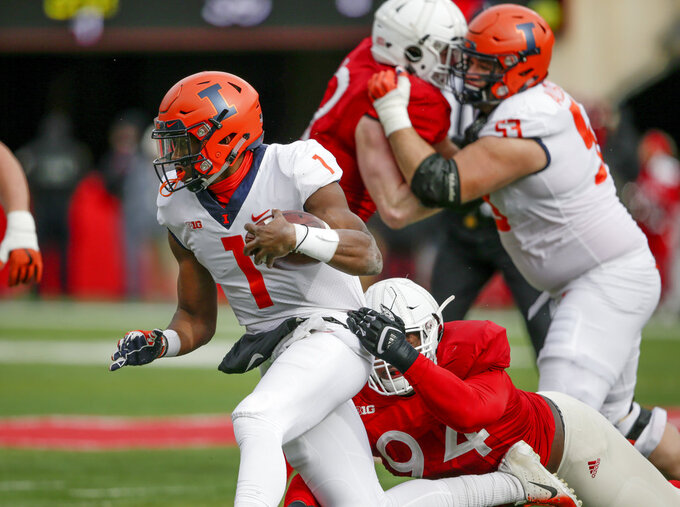 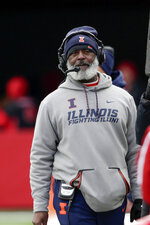 The Cornhuskers converted four of the Illini's five turnovers into 24 points while pulling away for a 54-35 win, their third in four games after an 0-6 start.

"We got some good breaks today. We were probably due for some good breaks," Nebraska first-year coach Scott Frost said. "They made a couple mistakes and got us some good situations. You can't take advantage of those if you're not doing the right thing."

The Huskers (3-7, 2-5 Big Ten) did plenty right. Wearing alternate uniforms to mark the 100th anniversary of the end of World War I, the Huskers rolled up 606 total yards on a raw afternoon when the wind chill dipped to 13 degrees. Illinois amassed 509 yards in the meeting of the Big Ten's worst defenses.

"There early on in the game, watching our offense executing, man, it's fun calling plays; it was a thing of beauty," Frost said. "Those guys were executing everything we were calling."

Adrian Martinez threw for 290 yards and accounted for four touchdowns and Devine Ozigbo ran for 162 yards and three scores.

Illinois (4-6, 2-5) had three turnovers in the first half — two muffed punts and a fumble by quarterback AJ Bush. Those led to 17 points for Nebraska, which led 38-21 at half.

Bush moved the Illini into Nebraska territory on the opening series of the second half but was intercepted when his pass went through Dominic Stampley's hands into safety Aaron Williams'. The Huskers embarked on a 17-play, 82-yard drive that chewed nearly 8 minutes off the clock, with Ozigbo scoring his second touchdown for a 24-point lead.

"When you turn the ball over like that, it's tough to win," Illini coach Lovie Smith said. "When you continue to give up big runs on the defensive side of the football, run and pass, it's tough duty. When you have a couple mishaps like we did in the special teams game against a team like this at home, it's tough to win."

Martinez was 24 of 34 and threw for three touchdowns, and he ran 13 times for 55 yards and a TD. His 345 yards of total offense pushed his season total to a school freshman-record 2,747.

Ozigbo broke a career-long 66-yard touchdown run in the second quarter and went 60 yards for another TD in the fourth.

Bush, playing against the school where he spent the first two years of his college career, threw for 126 yards but was intercepted twice. Nebraska couldn't stop Bush as a runner, though. He rushed for a school quarterback-record 187 yards and three touchdowns on 25 carries.

"It's cool, but I didn't get the most important stat I wanted," Bush said. "You ball out, but LeBron scores 60 and they lose. It's like that."

Illinois: Five turnovers can't be overcome when the defense has no answer for an offense that's rolling like Nebraska's. It was the second straight week the Illini have had three or more turnovers and third time in four games.

"I firmly believe we can move the ball on anybody," Ozigbo said, "and we should score every drive."

Ozigbo is 42 yards short of becoming the Huskers' first 1,000-yard rusher since 2014. ... Stanley Morgan Jr. caught eight passes for 131 yards and two TDs and moved to No. 2 on the school's all-time receiving list behind Kenny Bell. ... Illinois' 383 rushing yards were its second-most this season behind the 430 against Minnesota last week.

The Illini's Reggie Corbin, who ran for a career-high 213 yards against Minnesota, left with an injury in the middle of the second quarter. He ran nine times for 59 yards and caught one pass for 34 yards. He favored his right leg as he was helped off.