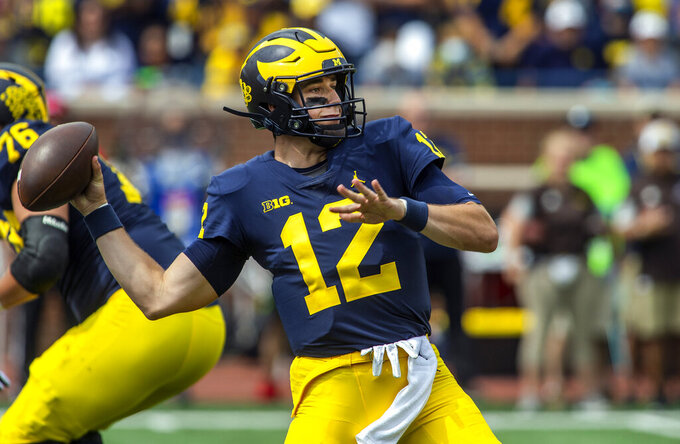 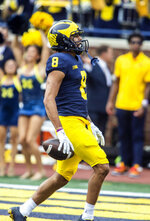 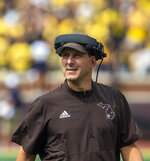 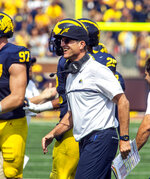 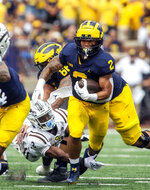 ANN ARBOR, Mich. (AP) — Ronnie Bell had a 76-yard touchdown reception and returned a punt 31 yards before being injured in Michigan's 47-14 victory over Western Michigan on Saturday.

The Wolverines (1-0) won the game easily, but they may have lost their best player for a while.

Bell was hurt on a punt return in the second quarter and kept weight off his right leg as he was helped off the field by a teammate and staff member. The senior receiver was later carted off the field and up the tunnel toward the team's locker room to be further evaluated.

“What can you say other than you hope for the best, expect the worst, and wait until you get the MRI results?" Harbaugh asked. “But no matter what, he’ll be back."

The Broncos (0-1) started strong — making it 7-all on La’Darius Jefferson's 2-yard run and trailing by just three points after the first quarter — but could not sustain success on either side of the ball.

Blake Corum, who had 111 yards rushing, opened the scoring with a 14-yard reception and his 30-yard touchdown run put the Wolverines ahead 40-7 early in the final quarter.

“There were a lot of naysayers going into this game that didn’t think we were going to do what we did," Corum said.

“The biggest positive was Kaleb was a little flighty early, but he calmed down," Lester said. “I was very proud of the poise of that kid because this was his first Power Five game, and it’s faster. He got hit a couple times, and he kept getting up, kept getting up."

Western Michigan: The Mid-American Conference team should be able to gain some confidence from the way it started the game.

“We had the ball on their side of the field most of the first half,” Lester said.

Michigan: Bell's injury silenced a crowd of 109,295 and seemed to stunt what should have been a feel-good afternoon at the Big House.

“That’s a big deal," Harbaugh said. “Ronnie is loved by everybody. Captain of the football team."

Michigan was looking ahead to next week's game against the 20th-ranked Washington Huskies in prime time.

“We haven’t done a damn thing,” defensive end Aidan Hutchinson said. “We’re all moved on and ready for Washington. We’re not content with this at all.”

Michigan welcomed 109,295 fans to the Big House, a year after fans were prevented from attending games due to the COVID-19 pandemic.

Western Michigan: Plays Illinois State, a program in the second tier of Division I college football known as the Championship Subdivision, on Sept. 11 at home.

Michigan: Hosts No. 20 Washington, which will likely be favored to win to give Harbaugh a chance to improve on his 0-11 record as an underdog with the Wolverines on Sept. 11.