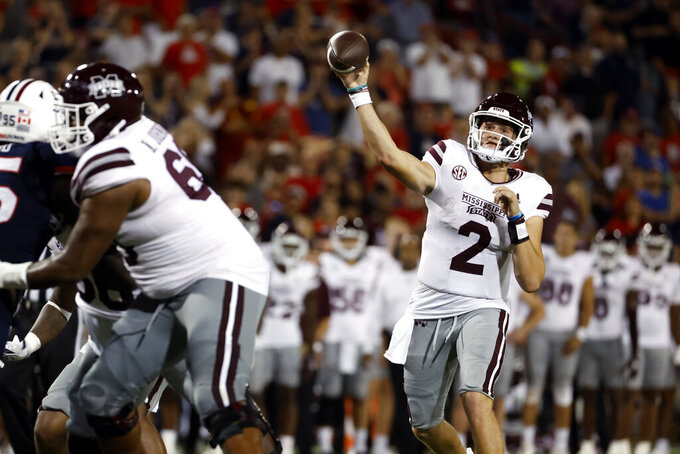 Mississippi State quarterback Will Rogers throws a touchdown in the second half against Arizona during a NCAA college football game Saturday, Sept. 10, 2022, in Tucson, Ariz. (AP Photo/Chris Coduto)

Line: Mississippi State by 2½, according to FanDuel Sportsbook.

It’s the Southeastern Conference opener for both teams and chance for Mississippi State, which has been getting votes in the AP Top 25 poll, to continue making its case for a spot in the national rankings. With LSU in transition following the hiring of coach Brian Kelly, it’s the kind of game Bulldogs coach Mike Leach needs to win to demonstrate his team can win more consistently in what is now his third season in Starkville. Meanwhile, Kelly’s Tigers have a chance to show what kind of progress they've made since their season-opening, 24-23 loss to Florida State in New Orleans two weeks ago.

Mississippi State’s offensive line and Bulldogs QB Will Rogers against LSU’s pass rush. The Tigers’ defensive line was arguably their strongest and deepest unit entering the season. They lost sophomore defensive end Maason Smith to a season ending knee injury in their season opener. But two of their top pass-rushers from a year ago, Ali Gaye and B.J. Ojulari, will try to disrupt the timing Leach’s “Air Raid” offense. Rogers has averaged 38.5 completions in his first two games this season, which ranks first nationally. Rogers’ 381.5 yards passing per game ranks third in the country.

LSU: QB Jayden Daniels, a transfer who started previously at Arizona State, has been LSU’s top play maker in the Tigers’ first two games. Daniels has five TDs passing and one rushing, and has completed 77.8% of his passes (35-of-45) for 346 yards without an interception. The dual-threat Daniels also leads the Tigers in rushing with 132 yards on 19 carries – an average of 6.9 yards per rush.

The Bulldogs won in their previous visit to LSU in 2020 in what also marked Leach’s debut as MSU head coach. ... Mississippi State ranks second nationally in time of possession, averaging 39:04 on offense through two games. ... MSU’s defense intercepted three passes at Arizona last week. ... The Bulldogs have held opponents to fewer than 150 yards rushing 17 times since 2020, third most in the SEC behind Alabama and Georgia during that same period. ... LSU RB John Emerey Jr. is expected to play for the first time since the 2020 season after being sidelined an academics-related suspension that lasted 15 games. Emery has seven career TDs and has averaged nearly 5 yards per carry since his LSU debut in 2019. ... Kelly has said CB Sevyn Banks, a transfer who started two seasons at Ohio State, could make his LSU debut after being limited by injuries. ... LSU WR Kayshon Boutte has 85 career receptions for 1,264 yards and 14 TDs in 17 career games with 12 starts.