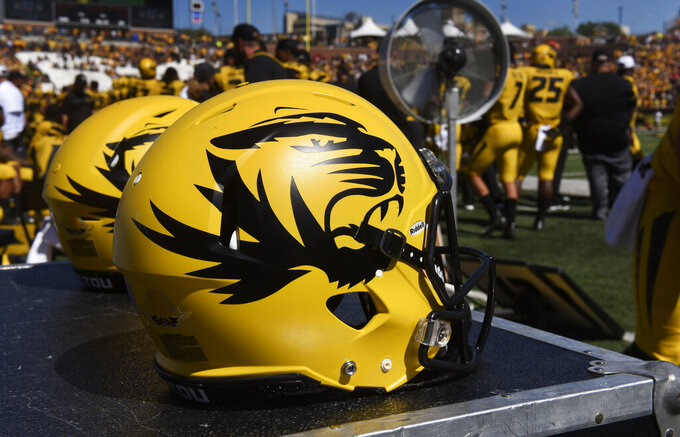 FILE - In this Sept. 22, 2018, file photo, a Missouri football helmet sits on the bench during the second half of an NCAA college football game against Georgia in Columbia, Mo. The NCAA has sanctioned Missouri's football, baseball and softball programs on Thursday, Jan. 31, 2019, after an investigation revealed academic misconduct involving a tutor who completed coursework for athletes. (AP Photo/L.G. Patterson, File)

KANSAS CITY, Mo. (AP) — The NCAA banned Missouri's football, baseball and softball programs from the postseason for a year and placed the entire athletic department on probation Thursday after a two-year investigation revealed academic misconduct involving a former tutor.

The penalties mean the Tigers' highly regarded football team won't be eligible for the SEC title game or a bowl game this fall, while their baseball and softball programs will not be allowed to participate in the SEC Tournament or the NCAA Tournament. The NCAA also trimmed scholarships amid other punishments.

Chancellor Alexander N. Cartwright vowed that the school would appeal "this harsh and inconsistent decision," a back-and-forth process that could take several months.

"The Committee on Infractions has abused its discretion in applying penalties in this case, and the university will immediately appeal this decision that has placed unfair penalties on our department and programs," athletic director Jim Sterk said. "It is hard to fathom that the university could be cited for exemplary cooperation throughout this case, and yet end up with these unprecedented penalties that could unfairly and adversely impact innocent current and future Mizzou student-athletes."

The Division I Committee on Infractions said the former tutor, Yolanda Kumar, acknowledged in late 2016 she had "violated NCAA ethical conduct, academic misconduct and academic extra benefits rules when she completed academic work for 12 student-athletes."

Kumar told the panel she felt pressured to ensure athletes passed certain courses, primarily in math, though the investigation "did not support that her colleagues directed her" to complete course work.

Missouri football coach Barry Odom called the committee's decision "unjust and unfair," and he said in a statement, "I'm looking forward to doing whatever I can to assist with the appeals process."

"We will fight for this great institution," Odom said, "and I will damn sure fight for my team."

NCAA investigators said Kumar completed course work offered by Missouri, those offered by other schools and a math placement exam required of all students. In one instance, Kumar allegedly completed an entire course for a football player, whose name was not revealed.

The school began its own investigation after Kumar claimed on social media she had committed academic fraud. Sterk later sent a letter to Kumar confirming that she had provided impermissible benefits and that she could no longer be associated with the athletic department.

"In this particular case, the institution, the tutor and enforcement all agreed this was a Level I case, which is severe misconduct," said David Roberts, the chief hearing officer for the infractions panel and a special adviser to the president at Southern California. "The case starts off with that agreement and the association has put in place a penalty matrix."

The NCAA acknowledged proactive steps taken by Missouri in investigating the academic fraud, but the school's administration was stunned it was not reflected in the severity of the penalties.

Along with three years of probation and the postseason bans, the football, baseball and softball teams also must vacate any records for games that included participation by the 12 athletes. The programs will see a 5 percent cut in scholarships for the upcoming academic year and recruiting restrictions include a seven-week ban on unofficial visits, off-campus contacts and any communication with prospects.

The NCAA also fined the school $5,000 plus 1 percent of each program's budget.

"We thought there might be a probation period and maybe vacating the wins," Sterk said, "but some student-athletes — the current ones that were involved with the tutor — have sat out contests, so we took appropriate action at the time. We felt we were doing the right thing."

Kumar already had been barred by the university from working for the athletic department, but the NCAA slapped her with a 10-year show-cause order that bars her from working with athletes at any school.

The former tutor did not respond to requests for comment Thursday, but she later unleashed a barrage of tweets in response to the investigation. In one of the posts, Kumar claimed she was "no longer able to substitute teach in Columbia Public (School) District" because of the fallout.

Former Missouri linebacker Kentrell Brothers, who now plays for the Minnesota Vikings, acknowledged in a tweet that Kumar was his tutor. Brothers said she "barely helped me so I'm confused (about the severe sanctions). Literally had to switch tutors."

While the case drew comparisons to recent academic misconduct at North Carolina, the NCAA said it differed in that "UNC stood by the courses and grades it awarded student-athletes."

"In support of that position," the committee's report said Thursday, "UNC asserted that although courses were created and graded by an office secretary, student-athletes completed their own work. Here, by contrast, Missouri acknowledged that the tutor completed student-athletes' work."

Roberts said the infractions committee recommended legislative relief waivers for athletes affected by the ruling, so those barred from this postseason could transfer without utilizing a redshirt.

Three years ago, the NCAA placed Missouri on probation after finding the school failed to monitor its men's basketball program in a case involving internships provided by a booster. A second booster was found to have provided impermissible benefits to 11 members of the same program totaling nearly $12,000.

Roberts said academic misconduct "strikes to the heart of the NCAA," and that "we looked into the facts and we implemented the rule. From our point of view, this case should be over."

Missouri officials made it clear that won't be the case.

"I certainly don't think these penalties are reflective of what we expected for self-reporting and that kind of cooperation, and through the appeals process we'll have an opportunity to correct this action," Sterk said. "I won't go through our case today but we have folks working on that right now, and they will be putting a strong case together for that appeal."