No. 9 Washington has major interest in Pac-12 title game 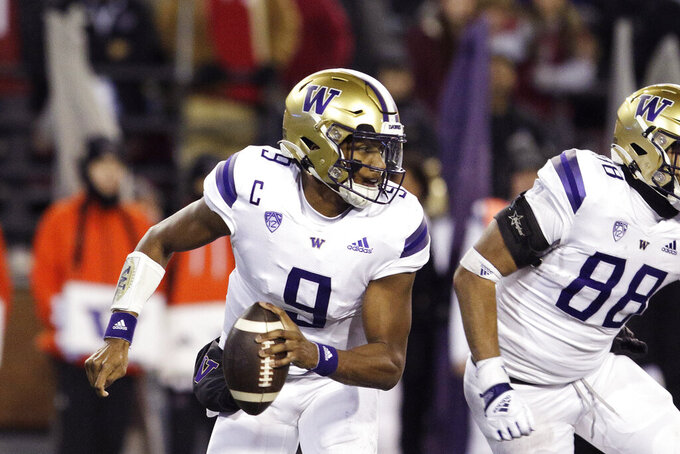 SEATTLE (AP) — Kalen DeBoer would much rather be preparing for the Pac-12 championship game than sitting around waiting to find out what the bowl destination will be for No. 9 Washington.

But the Huskies coach and the rest of his team have a rooting interest in what transpires on Friday night in Las Vegas between No. 4 Southern California and No. 12 Utah. A win by the Trojans could end up landing Washington a trip to the Rose Bowl in DeBoer’s first season in charge.

USC could be headed to the College Football Playoff with a win. That would open up the Rose Bowl to select a team of their choosing from the Pac-12 to replace the Trojans.

That could be the Huskies, who wrapped up a 10-2 regular season and 7-2 Pac-12 campaign with a 51-33 win over Washington State in the Apple Cup last Saturday. Washington, Utah and Oregon all finished tied for second in conference play, but Utah won the tiebreaker putting the Utes in the championship game opposite USC.

“I guess I’m looking at it this way, we did Utah a favor already, right?” DeBoer joked, noting that Washington’s win over Washington State is what put Utah into the title game. “Selfish-wise, I certainly think there is a team we’re rooting for.”

If the Pac-12 still had divisions, which it did away with this season, Washington would have won the North Division and been headed for Las Vegas.

“It’s hard because there’s a tie for the second spot and we’re in that tie. We all agreed on it before the season. Those are the rules and that’s what you got to go with,” DeBoer said. “We’d certainly love to see if we’ve got that type of team. We feel we do, certainly, but we had our chances throughout the course of the year.”

The Rose Bowl is not required to take Utah despite being in the championship game, especially with Washington expected to be ranked higher in the CFP rankings. Utah also played in the Rose Bowl last year. Washington’s last trip came after the 2018 season.

The Huskies also feature one of the most exciting offenses in the country led by quarterback Michael Penix Jr., the nation’s leader in yards passing and a late candidate to be included in the Heisman Trophy conversation.

Penix said Monday he intends to play in Washington’s bowl game even as his draft stock is rising. And it could end up being the Granddaddy of Them All.

“That’d be really incredible coming back Year 1 after 4-8 and (going) 10-2 and having the chance of playing in the Rose Bowl, which is the dream for so many guys on the West Coast,” DeBoer said. “To be playing, not on New Year’s Day but Jan. 2 would certainly be a highlight.”