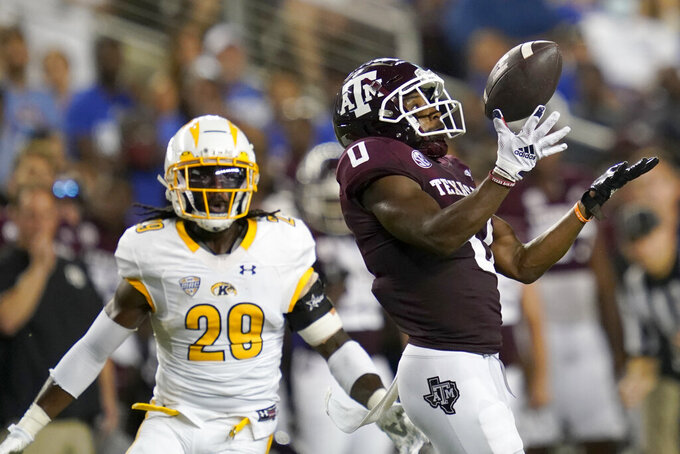 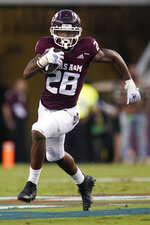 COLLEGE STATION, Texas (AP) — After slogging through an uninspired first half, Texas A&M needed a spark to get going.

The Aggies found it in Leon O’Neal Jr., whose 85-yard interception return for a touchdown helped sixth-ranked Texas A&M pull away in 41-10 win over Kent State on Saturday night.

“He’s an Energizer Bunny,” coach Jimbo Fisher said. “You’ve got to have that guy. He’s a big part of what we do.”

O’Neal had two interceptions, with the first coming just before halftime when he picked off Dustin Crum’s pass in the end zone. With about eight minutes left in the third, O’Neal jumped in front of a receiver for his second pick. He weaved around a couple of Kent State players and dashed untouched for the score, capping the play by diving into the end zone to make it 20-3.

O'Neal choked up when recounting his score and thanking the teammates who blocked for him.

“We always talk about Pick-6’s, touchdowns, stuff like that," he said. “Now that it’s come to fruition, it’s a big milestone for us as a DB group."

O’Neal and Achane's big performances helped make up for a mistake-riddled night by Haynes King, who threw three interceptions in his first career start.

“We did what we had to do to win the game,” Fisher said. “We played a very sloppy game in my opinion. We’ll learn from the first game and hopefully we’ll get a lot better.”

Fisher wasn't happy with King's turnovers, but liked the way he responded after those miscues.

“He played really well," Fisher said. “I thought he overcame adversity ... the ball turned over and his mentality didn’t change. He kept going right at them."

King took over this year for Kellen Mond, the team’s starter for the past three seasons who's now with the Minnesota Vikings. King looked good at times, but often overthrew receivers. His first two interceptions came throwing into tight coverage in the second quarter. He was 21 of 33 for 292 yards and threw two touchdown passes to Smith.

Crum threw for 89 yards before he was replaced by Collin Schlee in the fourth quarter. Schlee scored on a 1-yard run with about eight minutes left to cut it to 34-10.

Achane displayed the speed that allows him to double as a sprinter on Texas A&M’s track team when he ran 63 yards for a touchdown that extended the lead to 27-3 with about four minutes remaining in the third. He added a 1-yard scoring run in the fourth and finished with 124 yards rushing.

Isaiah Spiller had 113 yards rushing for the Aggies and Smith had 100 yards receiving.

King found Caleb Chapman for a 53-yard gain on the possession after Achane's first TD, but King's pass was tipped and intercepted by Khalib Jones two plays later to end the drive.

Smith’s second touchdown came on a 14-yard reception that made it 34-3 with about 11 minutes left.

The Aggies took a 7-0 lead when Smith grabbed a 4-yard pass from King on the first drive.

King has interceptions on consecutive possessions in the second quarter with the second one giving the Golden Flashes the ball at their 36. Kent State had a chance to tie it on the ensuing drive, but O’Neal’s first interception of the game preserved the lead.

King will have to improve to get the Aggies where they want to go this season. But until he gets more comfortable, Texas A&M’s powerful running game and opportunistic defense should be enough to keep the Aggies in the win column.

Spiller's work Saturday pushed him past 2,000 yards rushing in his career with 2,095. Spiller is looking to build on a solid 2020 season where he ran for 1,036 yards and was a Doak Walker Award finalist.

Texas A&M could move up a spot in next week’s poll after No. 5 Georgia beat third-ranked Clemson 10-3 Saturday.