Pick Six: Cowing, Grubbs are among elite on struggling teams 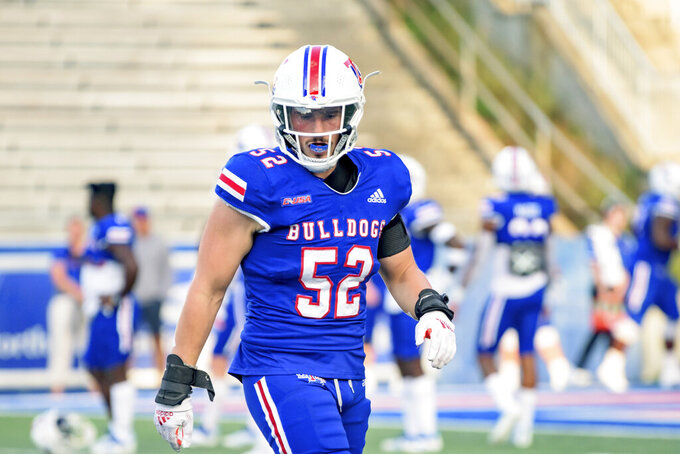 Great players are spread around college football, of course. Fans just don't hear much about some because they are on losing teams and out of the spotlight.

Eight of the players on the 2021 Associated Press All-America first and second teams were on teams with losing records.

Among the six AP preseason under-the-radar players last year, one became an NFL second-round draft pick, two were third-rounders and another was selected in the fifth.

Here are six players going places in 2022, even if their teams aren't:

Cowing was a star at his previous school (UTEP) and he has a chance to be one of the best receivers in the Pac-12 not named Jordan Addison, if Washington State transfer Jayden de Laura can get him the ball.

Grubbs has been a hidden gem playing on a defense ranked in the bottom half of Conference USA two straight years. The 6-foot-1, 224-pound sophomore already is a projected NFL late-round draft pick in 2023 and has a chance to gain additional spotlight with games at Missouri and Clemson in September.

Last year he led the Bulldogs with 97 tackles, 10 of them for loss, with four pass breakups and two forced fumbles. That was after he had a team-best 99 tackles in 2020.

Logan is a punishing hitter who led the Big 12 with 113 tackles, most by an FBS safety last season and by a Kansas defender since 2018. His 79 unassisted tackles ranked first in the conference and third nationally.

The 6-foot, 210-pound senior’s ball skills are excellent and, combined with his aggressiveness and physicality, give him a chance to be drafted. He broke up six passes and intercepted one last season.

Patterson is the best linebacker in the Mid-American Conference and, like his twin brother Jaret, plays with a high motor. Jaret, who starred at running back for the Bulls, is entering his second season with the Washington Commanders after going undrafted in 2021.

At 6-foot and 232 pounds, James doesn’t fit the mold of an NFL linebacker, but he’s a big-time playmaker whose strength is his intelligence and instinct. He was second in the MAC with 116 tackles, including 13 for loss and 4.5 sacks.

Skoronski was next man up when Rashawn Slater opted out in 2020 because of the pandemic. Slater was a first-round draft pick and Pro Bowl selection as a rookie, and no one would be surprised if Skoronski followed a similar path.

The 6-foot-4, 315-pound junior was the No. 3-ranked Big Ten tackle last year, according to Pro Football Focus. He allowed just two sacks in 436 pass-blocking snaps, and he helped clear the way for Evan Hull to rush for 1,000 yards for an otherwise bad offense.

Tucker has been the best thing going for Syracuse for two years. Last season he set a school season record with 1,496 yards, his 124.7 yards per game ranked fourth nationally, and he was on The Associated Press All-America second team.

The 5-foot-10, 209-pound sophomore improved his speed after running the 60 meters on the indoor track team last year. Tucker fumbled just once in 249 carries, and his 6.1 yards per carry and 4.1 yards after contact were second only to Michigan State's Kenneth Walker III among players with at least 200 attempts.