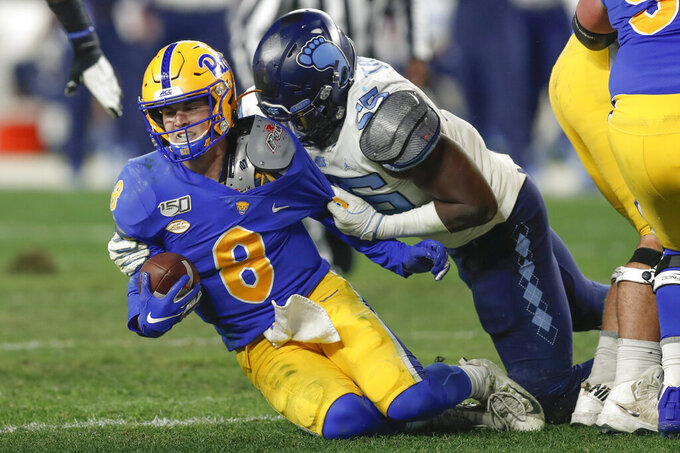 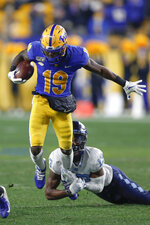 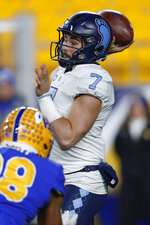 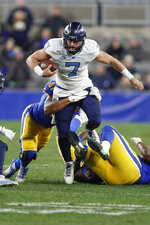 PITTSBURGH (AP) — The play gave Pittsburgh quarterback Kenny Pickett the option of keeping it or handing it off to running back Vincent Davis.

Only it really wasn’t an option at all. Pickett knew he was going to keep the ball before he even took the snap on first-and-goal at the North Carolina 3 in overtime on Thursday night.

“Judging by the way they were playing, I (felt) like it’s going to be one-on-one and (I’d) make a guy miss and score,” Pickett said.

Pickett’s 3-yard sprint over left tackle gave the Panthers the lead in the extra period and Pitt’s defense made it stand up, giving the Panthers a 34-27 victory over the Tar Heels that kept Pitt in the mix for a second straight Atlantic Coast Conference Coastal Division title.

“It was a personal game,” said Pickett, who threw for 359 yards and a touchdown and added 53 yards and a pair of scores on the ground. “We made it personal this week. A lot of those guys have never lost to Pitt on that team ever. It was a really good feeling to get that win.”

“Those guys believe in each other and like I said, that’s as big a team win as you can have offensively, defensively,” Panthers coach Pat Narduzzi said. “They made plays when they needed to. … Guess the monkey is off the back.”

Howell finished 27 of 43 for 322 yards with three touchdowns and an interception for North Carolina as the Tar Heels rallied twice in the fourth quarter to force overtime. Antonio Williams ran for 107 yards and Dazz Newsome caught 11 passes for 170 and a touchdown.

Howell threw two touchdowns in an 88-second span to erase a 24-10 deficit. Pitt moved back in front on a 24-yard field goal by Alex Kessman with 5:18 to play but Howell responded by taking North Carolina 60 yards in 13 plays. Noah Ruggles hit a 32-yard field goal with 13 seconds left in regulation, setting the stage for another tight finish. All seven meetings between the schools as conference rivals have been decided by a touchdown or less.

“That’s our second overtime loss,” North Carolina coach Mack Brown said. “I’m proud that the kids fight so hard. We, as coaches, have got to figure out how to get them over the hump.”

Pitt, which entered the game second in the country in sacks, got to Howell five times, including a sack by Jaylen Twyman that pushed the Tar Heels back to fourth-and-long in overtime.

The Panthers have relied heavily on Pickett this season, partly by design following the arrival of first-year offensive coordinator Mark Whipple, and partly out of necessity with the running game struggling to find anything resembling consistency.

Against the Tar Heels, Pickett found time to let loose. He completed passes of at least 25 yards to five different receivers, including a beautiful rainbow to Shocky Jacques-Louis midway through the second quarter that the sophomore wide receiver turned into a 74-yard touchdown that gave the Panthers a 17-7 lead.

In a series that’s found a way to be both lopsided and tight at the same time — North Carolina’s six victories over Pitt entering Thursday came by a combined 26 points — the Tar Heels didn’t go quietly. Howell’s fearless play in the second half sparked a comeback that proved North Carolina is heading in the right direction in Brown’s return.

Narduzzi took a not exactly thinly veiled shot at the officiating. The Panthers lost safety Damar Hamlin in the second quarter when he was ejected for targeting. Officials made the call on a play in which Hamlin appeared to make a diving attempt at an interception and instead slammed into Newsome.

“We got two good wins today, beat everybody on the field today,” Narduzzi said, later adding, “we had a couple victories out there today. One against UNC and we’ll leave it at that.”

North Carolina: Howell can sling it. The freshman kept his poise despite being under heavy pressure most of the night. As he matures, the Tar Heels figure to be on the upswing. Still, North Carolina will need wins in each of its final two games to earn a bowl berth.

Pitt: Pickett’s competitiveness is the main reason the Panthers have a shot at a rare Coastal repeat. He absorbed a pair of late hits on consecutive plays in the third quarter and took a series of shots yet kept getting back up.

Pitt: Travels to Virginia Tech on Nov. 23. The former Big East rivals have split their six meetings since Pitt joined the Hokies in the ACC.