Pitt's Narduzzi: "No regrets" over decision to kick vs. PSU 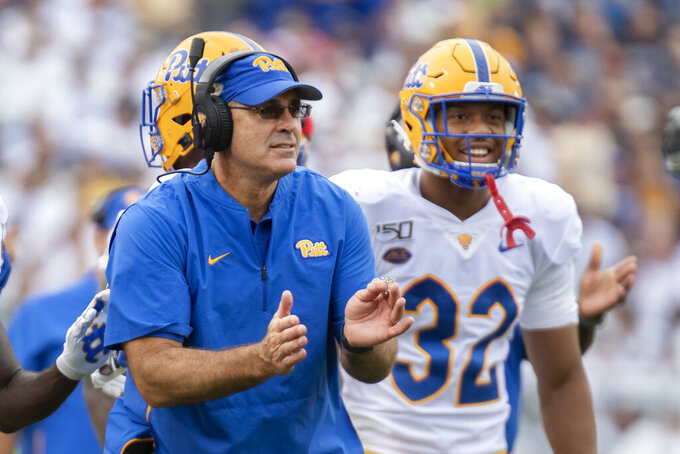 PITTSBURGH (AP) — Pittsburgh coach Pat Narduzzi knows his decision to attempt a field goal instead of going for it on fourth down at the goal line late in a 17-10 loss to Penn State on Saturday will be talked about for years with the rivalry taking an indefinite break.

Yet Narduzzi is adamant he did the right thing, insisting Monday he did what he felt would give his team the best chance to pull off the upset.

"I have no regrets with the call at all," Narduzzi said. "I really don't."

The Panthers trailed by a touchdown with less than five minutes to go on Saturday and faced a fourth-and-goal at the 1. Rather than try to tie the game — or potentially even go ahead by attempting a two-point conversion — Narduzzi sent Alex Kessman on for a 19-yard field goal kick to get Pitt within four. The ball smacked off the left upright.

"When you look at it, we did what we wanted to do," Narduzzi said. "We wanted to get three there. We wanted to go out and play defense again."

Though Pitt (1-2) did get the ball back with under 2 minutes to go and drove to the Penn State 26, Kenny Pickett's heave to the end zone as time expired fell to the ground.

Narduzzi went out of his way to praise the play of Pickett — who threw for a career-high 372 yards — and a defense that kept the Nittany Lions in check for large portions of the afternoon. Asked why not gamble and go for it considering his confidence in both units and the fact his team hadn't scored a touchdown in the second half in each of its last five games coming in, Narduzzi bristled ever so slightly.

"I explained why not, so I'll explain again, that's why not," he said. "That's why we did what we did, and I feel good about it. Again, you can talk about what we did in Week 1 and Week 2. This is Week 3 and we're moving the football. Thanks for the question."

Narduzzi did apologize to "Panther Nation" for the loss, adding "there's nobody that feels worse about that than the guys in this room."

Guys who must now find a way to emotionally rebound on Saturday against No. 15 UCF (3-0). The Golden Knights drilled the Panthers 45-14 in Orlando last year, but Pitt appears to be significantly better on defense than it was a year ago. The Panthers held Penn State — which came in averaging 62.5 points through two weeks — to a pair of touchdowns and, except for a couple of explosive plays, never let the Nittany Lions get comfortable.

It was a positive step forward for the defending ACC Coastal Division champions everywhere but on the scoreboard.

"Sometimes if you just look at the wins and losses, you look at nothing else, you kind of lose track of really where you are and what you've done," Narduzzi said. "But I think I did, at least I told our kids, I really think we made improvements from Week 2 to Week 3. As young as we are, that's really what we're looking for."