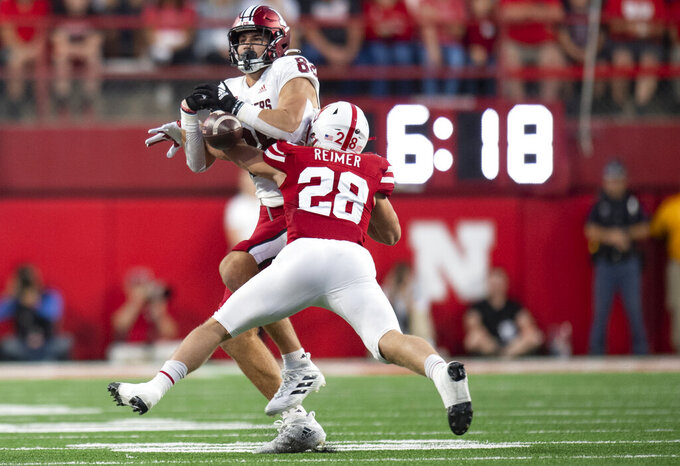 Nebraska linebacker Luke Reimer (28) breaks up a pass intended for Indiana tight end AJ Barner (88) in the 2nd quarter during an NCAA football a game between Nebraska and Indiana, Saturday, Oct. 1, 2022 at Memorial Stadium in Lincoln, Neb. (Noah Riffe/Lincoln Journal Star via AP)

Line: Nebraska by 3, according to FanDuel Sportsbook.

Nebraska ended a nine-game losing streak against Bowl Subdivision opponents when it beat Indiana, and now the Cornhuskers look to build on it. Interim head coach Mickey Joseph has brought a positive vibe, and the Huskers believe they can still achieve some big goals playing in a less-than-intimidating Big Ten West. If Rutgers is going to get back to a bowl game this season, this is the type of game it needs to win.

Nebraska RB Anthony Grant vs. Rutgers defense. Grant is a punishing runner who has four 100-yard games and averages 5.2 yards per carry, second-best among Big Ten backs with more than 100 attempts. The Scarlet Knights allowed 7.1 yards per carry against Ohio State, way up from the 1.8 against four less distinguished opponents.

Nebraska: QB Casey Thompson this week disclosed a host of injuries he’s dealt with the first five games: shoulder, wrist, jaw, calf. The Texas transfer landed on his shoulder in the second half against Indiana and had to visit the medical tent. Now he faces a physical Rutgers defense, and it’s critical to keep him on the field because there’s a steep drop-off after him.

Rutgers: Evan Simon has been the only healthy scholarship quarterback for weeks. Noah Vedral got four snaps last weekend against Ohio State in his first action of the season. The player to watch is true freshman running back Sam Brown. He has been getting more time and leads the team with 210 yards on 42 carries, a 5.0 yard average.