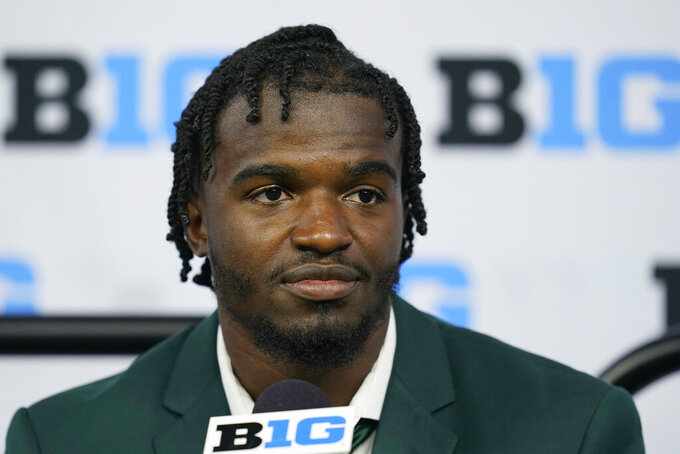 PISCATAWAY, N.J. (AP) — It's hard to know what to expect from Rutgers in Greg Schiano's third season back coaching the nation's oldest college football program.

The Scarlet Knights went to a bowl in 2021, facing Wake Forest in the Taxslayor Gator Bowl — with an asterisk: Rutgers got the bid eight days before the game with a 5-7 record after Texas A&M had to withdraw because of COVID-19 issues. The 38-10 loss to the Demon Deacons was not unexpected.

Many of the outstanding players from that team are gone, including linebacker and leading tackler Olakunle Fatukasi, leading rusher Isaih Pacheco and top receiver Bo Melton.

While there are returning veterans like quarterback Noah Vedral, defensive back Avery Young and punter Adam Korsak, the team is very young. There is talent with redshirt quarterback Gavin Wimsatt, running back Kyle Monangai and defensive lineman Aaron Lewis.

The question mark is how Rutgers will do in another tough Big Ten Conference season. Six of its seven losses in 2021 were in the regular season against teams that went to bowl games.

Schiano said he is more concerned about how his staff and the team are approaching things on a daily basis rather than the results.

“I’ve done this long enough to know that if you if you recruit the right people and then you have a process that improves them every single day, eventually you’re going to be good enough,” he said. "When that day comes, you'll know.

“Everybody would like a timeline," added the 56-year-old Schiano, who is entering his 14th season overall at Rutgers. ”Give me a timeline on anything in our society over the last two years with COVID, and then another outbreak of COVID."

The answers will start coming on Sept. 3 when Rutgers plays at Boston College.

Offensive coordinator Sean Gleeson uses multiple sets and looks. He also may use multiple quarterbacks. Vedral, who came as a graduate transfer in 2020, is looking to take the starting job for the third year. Wimsatt, one of the highest-rated quarterbacks recruited by Rutgers, is pushing for playing time along with fellow sophomore Evan Simon. Rutgers will play more than one if someone doesn't win the job.

Schiano added another New Jersey guy to the state university, hiring Joe Harasymiak away from Minnesota to become his defensive coordinator. He spent the last three seasons with the Golden Gophers after previously being the head coach at Maine.

Minnesota ranked third in the nation in total defense (278.8 yards) and sixth in scoring defense (17.3 points).

Rutgers allowed an average of 26.62 points in Robb Smith's second season in charge. The defense will be the same aggressive type Schiano has used.

Korsak was a preseason All-Ameria choice by several publications and had a spectacular '21 season. The Australian averaged 45.25 yards per punt (net) and landed 38 punts inside the 20-yard line.

Schiano has alway valued special teams and he has two outstanding returners in Aron Cruickshank and Joshua Youngblood. The placekicking job is open with Guy Fava competing with Ireland's Jude McAtamney and Jai Patel.

Rutgers signed its highest-rated recruiting class in the Big Ten era in 2022, ranked No. 26 nationally by ESPN. The class includes the top recruits from New Jersey (OL Jacob Allen), New York (LB Moses Walker) and Kentucky (Wimsatt). Thirteen signees for the offensive line marked the highest for any position group.

Rutgers' 12-game schedule includes seven teams that played in bowl games, including the final five games: Minnesota, Michigan, Michigan State, Penn State and Maryland. Earlier, the Scarlet Knights will face Iowa and Ohio State. Boston College, the season-opening foe, had to withdraw from the Military Bowl because of COVID-19 issues.