SEC, Big 12 to allow football workouts on campus next month 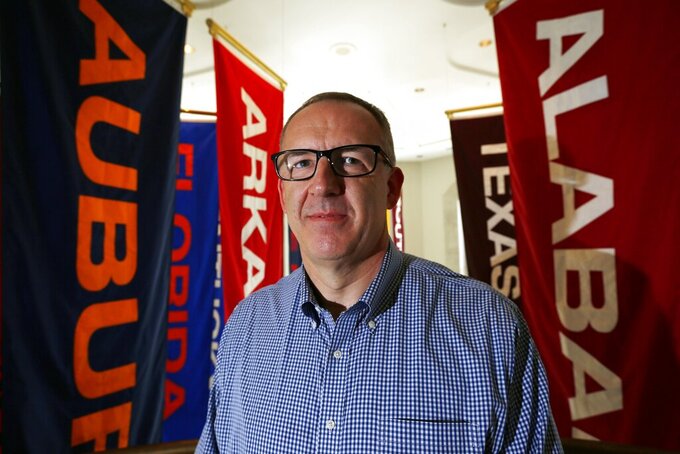 FILE - In this May 23, 2016, file photo, Southeastern Conference commissioner Greg Sankey poses in Birmingham, Ala. There are 130 major college football teams, spread across 41 states and competing in 10 conferences, save for a handful of independents. The goal is to have all those teams start the upcoming season at the same time — whether that's around Labor Day as scheduled or later — and play the same number of games.(AP Photo/Brynn Anderson, File)

Southeastern Conference schools will be able to bring athletes in all sports back to campus for voluntary activities starting June 8 at the discretion of each university, and the Big 12 plans to welcome football players back to campus a week later.

The Friday announcements are the latest signs that a college football season will be launched in some form this fall. Other conferences are expected to follow, though decisions could be left to individual schools.

The move comes two days after the NCAA Division I Council voted to lift a moratorium on voluntary workouts on campus by football and basketball players, effective June 1. The NCAA updated that ruling Friday by saying voluntary activities would be allowed in all sports starting June 1.

“At this time, we are preparing to begin the fall sports season as currently scheduled, and this limited resumption of voluntary athletic activities on June 8 is an important initial step in that process,” SEC Commissioner Greg Sankey said.

The SEC initially announced Friday that voluntary in-person activities could resume June 8 on SEC campuses only for football, men’s basketball and women’s basketball. But after the NCAA issued its updated ruling Friday afternoon, the SEC announced that June 8 date would apply to athletes in all sports.

Big 12 presidents and chancellors met Friday and decided voluntary activities could begin June 15 for football, July 1 for other fall sports and July 15 for all other sports.

SEC officials noted any workouts would take place “under strict supervision of designated university personnel and safety guidelines developed by each institution.” They referred to June 8 as the start of “transition period that will allow student-athletes to gradually adapt to full training and sports activity after this recent period of inactivity.”

Permitted actions are limited by the NCAA to voluntary activities supervised by strength and conditioning personnel. Georgia athletic director Greg McGarity said it was “only the first step with further details and plans coming over the next several days and weeks.”

“This is an important first step toward having a season this fall, and we will continue to collectively work together as our top priority is to ensure the safety and well-being of our student-athletes, coaches and staff,” Auburn coach Gus Malzahn said in a statement.

Defending national champion LSU said it will resume voluntary workouts for players on June 8 in accordance with the SEC decision.

“Our administration has worked very hard to make sure that all of the necessary safety procedures and protocols are in place to keep our team safe and healthy,” Tigers coach Ed Orgeron said. “This is a great first step to take in order for us to get back to playing the great game of college football in the fall.”

The SEC decided to resume athletic activities with the guidance of a league task force that includes public health, infectious disease and sports medicine professionals from each of the league’s 14 member schools.

The task force prepared a series of best practices for screening, testing, monitoring, tracing, social distancing and maintaining clean environments to serve as a guide for each school.

Recommendations included testing of symptomatic team members (including athletes, coaches and staffers) as well as screening athletes before they arrive on campus within 72 hours of entering athletic facilities and on a daily basis once they resume athletic activities.

Other recommendations include immediate isolation of team members who are diagnosed with COVID-19 or are under investigation, followed by contact tracing under Centers for Disease Control and local public health guidelines.

“Health and safety have been our top priority as we’ve gone about this planning process, and we’ll continue to follow guidance from medical experts and health officials as we navigate the coming weeks,” Tennessee athletic director Phillip Fulmer said. “Our staff and student-athletes should be prepared for a ‘new normal,’ as we’ll be implementing changes to how everyone accesses and uses our facilities.”

SEC officials said the task force’s recommendations could provide a guide to league members, Sankey noted that each school would get to make its own decisions regarding plans for how to make sure student-athletes return safely.

For example, even though the task force’s recommendations only mentioned testing symptomatic team members, Georgia senior associate athletic director for sports medicine Ron Courson said in a statement that the Bulldogs “will conduct COVID testing and perform medical evaluations on all student-athletes.” Florida announced that it also would be testing all of its athletes.

Texas Gov. Greg Abbott said Friday he thinks college football will return on schedule with at least some spectators. Abbott has already issued new rules to allow youth sports leagues to resume in June and for some professional leagues to hold events without spectators.