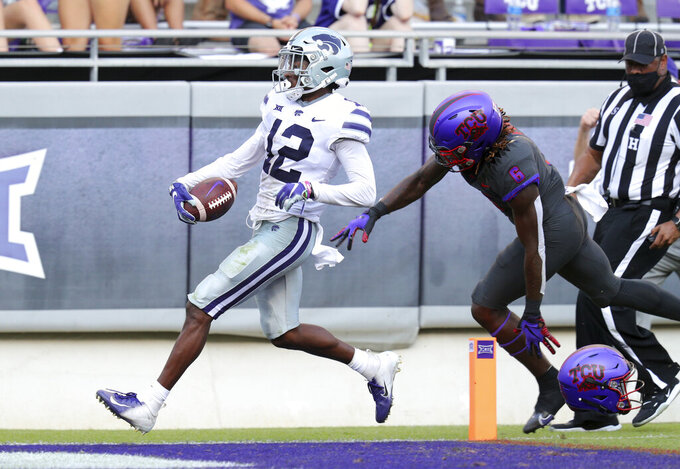 Kansas State defensive back AJ Parker (12) scores on an interception ahead of TCU running back Zach Evans (6) in the third quarter of an NCAA college football game Saturday, Oct. 10, 2020, in Fort Worth, Texas. (AP Photo/Richard W. Rodriguez)

K.J. Costello's SEC-record passing game against LSU sure seems like a long time ago.

The last two weeks Mississippi State's offense has struggled unlike any Mike Leach unit in his 19 years as a head coach.

The 24-2 loss to Kentucky on Saturday, which followed a 21-14 loss to Arkansas, gave the Bulldogs a total of 16 points since they beat defending national champion LSU 44-34 behind Costello's 623 yards and five touchdowns.

Before Saturday, Leach had never had one of his “Air Raid” offenses fail to produce points. All that stood between Leach and his first shutout loss in 232 career games was a bad snap that got past Kentucky's punter and was kicked out the back of the Wildcats' end zone for a safety.

Costello threw four interceptions and backup Will Rogers was picked off twice.

North Carolina's 56-45 win over then-No. 19 Virginia Tech marked the most points the Tar Heels have scored against an opponent in the AP Top 25.

Their 656 total yards were the second-most allowed by the Hokies. Alabama amassed 833 against them in 1973.

Carolina's 399 rushing yards were its most against an ACC opponent since 1988.

It was the third time in program history, and first time in an ACC game since 1980, that the Tar Heels had two rushers go for 100 yards and a quarterback pass for 200 in the same game.

Kansas State has scored 119 non-offensive touchdowns since 1999, tops in the nation and 10 more than the team with the next most (Alabama).

The Wildcats' latest defensive TD came in their 21-14 win over TCU when AJ Parker ran back an interception 38 yards. It was their first pick-six since 2017.

The Yellow Jackets, coming off a 46-27 win over Louisville, have gone over 400 yards of total offense in the first four games, when playing all FBS opponents, for the first time since 1999.

Tech is averaging 453 yards per game, but has been slowed by 12 turnovers, though it had none against Louisville after committing five in each of the previous two games.

Najee Harris' career game for Alabama also saw one of the most impressive streaks in the college game end. The senior had never fumbled as a rusher or receiver in his 466 career touches (423 rushes, 43 catches) before Mississippi's Jakorey Hawkins stripped the ball from him at the Rebels' 1 on a run in the first quarter.

SOONERS CAN COUNT ON 28

Oklahoma's 53-45 win over Texas in four overtimes extended the Sooners' streak of scoring at least 28 points to a school-record 56 consecutive games. It's the longest streak in the nation since at least 1980.