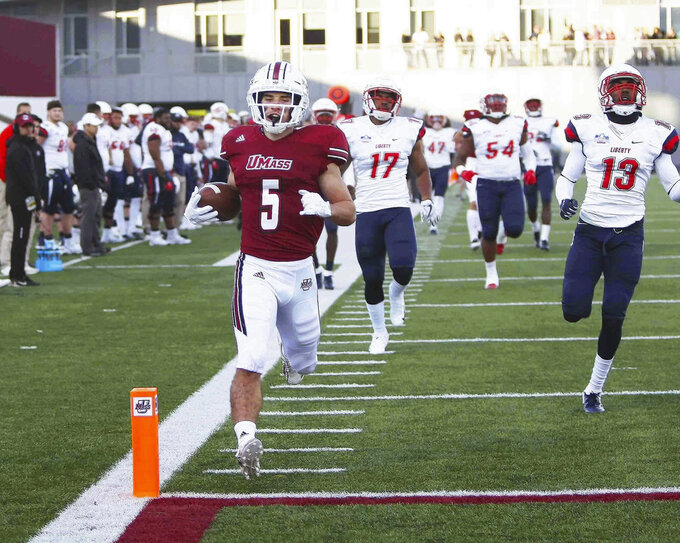 Massachusetts' Andy Isabella (5) runs into the end zone against Liberty defenders in the first half of an NCAA college football game in Amherst, Mass., Saturday, Nov. 3, 2018. (J. Anthony Roberts/The Republican via AP) 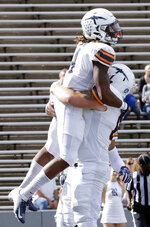 Andy Isabella of UMass posted only the third 300-yard receiving game in five years when he had 303 yards on nine catches against Liberty.

Ross Comis targeted Isabella 15 times in the 62-59 triple-overtime win over Liberty. Among their completions were 48, 58, 61 and 89 yarders.

Comis' 540 yards passing ranks No. 2 on the UMass single-game chart.

UMass surrendered the previous 300-yard receiving game. That was by Louisiana Tech's Carlos Henderson, who had 326 yards against the Minutemen in 2016.

Pittsburgh's Darrin Hall turned in the best rushing performance of the week, going for 229 yards and three touchdowns on 19 carries against Virginia. It was his second career 200-yard game; he had 254 against Duke last season.

Illinois' Reggie Corbin had a career-high 213 yards on just 13 carries against Minnesota, including touchdown runs of 72 and 77 yards.

National rushing leader Jonathan Taylor of Wisconsin, who fumbled twice and was limited to 46 yards on 11 carries against Northwestern in his previous game, piled up 208 yards and three touchdowns on 27 runs against Rutgers. He was fumble-free in his sixth 200-yard game in two years.

Oklahoma's Trey Sermon turned in his school's biggest rushing game in two years when he went for 206 yards and three TDs on 26 carries against Texas Tech, all career highs.

UTEP ended the nation's longest losing streak, one that stretched 20 games until the Miners won 34-26 at Rice. UTEP hung on after getting out to a 27-0 lead.

The longest losing streak now belongs to Rice, which has dropped nine in a row since winning its opener against Prairie View A&M.

Only one of Houston's 64 scoring drives has lasted longer than 4 minutes.

North Carolina linebacker Cole Holcomb's 22 tackles against Georgia Tech were the most by a Tar Heel player since 2007. That raised Holcomb's season total to 81, 33 more than Carolina's No. 2 tackler. Also, Holcomb forced a national season-high three fumbles against Tech, the first forced fumbles in his 33 career games.

Alabama has shut out LSU at Tiger Stadium, aka "Death Valley," four times since 1996. The last team other than Alabama to hold LSU scoreless at home is Tennessee, which won 20-0 in 1992.