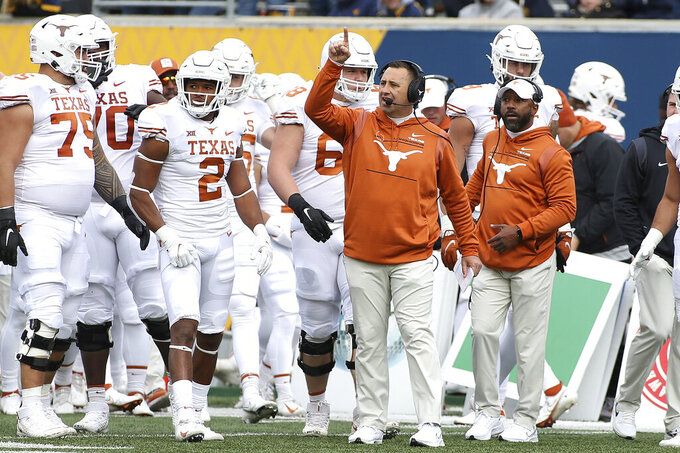 Texas coach Steve Sarkisian reacts on the sideline during the first half of an NCAA college football game against West Virginia in Morgantown, W.Va., Saturday, Nov. 20, 2021. (AP Photo/Kathleen Batten)

AUSTIN, Texas (AP) — One team is left playing for pride to finish out an otherwise miserable season. The other would like to be the one to put a bow on all that misery.

Texas (4-7, 2-6 Big 12) and Kansas State ( 7-4, 4-4) meet Friday with the Longhorns in a six-game spiral under first-year coach Steve Sarkisian after a 4-1 start. The Longhorns were once ranked as high as No. 15 this season before the bottom fell out.

The skid already ranks as the worst at Texas in 65 years and has Sarkisian talking about a complete “tear down” and “rebuild” of the program in the spring. A win Friday would at least send Texas into the project on a good note.

“I recognize some of the narrative is the sky is falling” at Texas, said Sarkisian, who insists he can handle the turmoil and fan unrest around the program.

“I'm built for this,” Sarkisian said. "I think our team has been hardened by a lot of stuff, but has brought us very close. That is a good place to be building into year two.”

Kansas State recovered from its own three-game skid to peel off four wins in a row to guarantee a winning season and a bowl trip. The run ended with last week's 20-10 loss to Baylor that was made even worse when starting quarterback Skylar Thompson left the game late with an injury.

Kansas State is a different team with Thompson at the controls. Coach Chris Kleiman said early in the week there's an “outside” chance Thompson will play against the Longhorns. If he doesn't, Will Howard will likely be under center for his 10th career start.

Texas' already complicated quarterback situation got even trickier when Casey Thompson and Hudson Card both got hurt in last week's loss at West Virginia.

Sarkisian said both were “day-to-day” ahead of the game, but projected that if healthy, Thompson will start. Thompson took over for Card after two games and played exceptionally well for several games before tailing off.

Card has both struggled and flourished in relief appearances when Thompson was struggling. The revolving door has left it an open question about who will start in 2022 and whether one of them would choose to transfer.

Sarkisian has already promised to “open up” the position ahead of next season.

Kansas State running back Deuce Vaughn has seven 100-yard games this season, including the last four. He also has 14 rushing touchdowns and three more receiving. He could be set for another big day just a few miles from his hometown of Round Rock, an Austin suburb. Texas has allowed a 100-yard rusher in seven consecutive games and ranks No. 112 nationally in run defense (199 yards allowed per game).

The Texas run game is diminished without injured starter Bijan Robinson (dislocated elbow) but is still quite capable of grinding out yards and breaking big plays. Alabama transfer Keilan Robinson ran for 111 yards, including a 49-yard touchdown, last week against West Virginia. Good news for Texas: Bijan Robinson told reporters this week he plans to return in 2022.

Kansas State's Felix Anudike-Uzomah has 11 sacks, just shy of the school record of 11.5. He's also got 14.5 total tackles for losses and his six forced fumbles leads the nation. All of that could be a big problem for a struggling Texas offensive line. The Longhorns allowed two strip-sack fumbles that set up touchdowns in the loss to Kansas, and have given up eight sacks in the past three games.

Once Bijan Robinson was injured, freshman receiver Xavier Worthy became a key playmaker for the Longhorns. His 12 touchdown catches are already a Longhorns freshman record and he's one shy of the overall season record set by Jordan Shipley in 2009.

Texas will honor in pregame nearly 30 senior players, including a few sixth-year players who had three head coaches in their careers. Notable among who those would be eligible but are not participating, indicating they are at least considering returning next season: Linebacker DeMarvion Overshown and kick returner-defensive back D’Shawn Jamison.