They're unbeaten too: No. 5 Penn State at No. 13 Minnesota 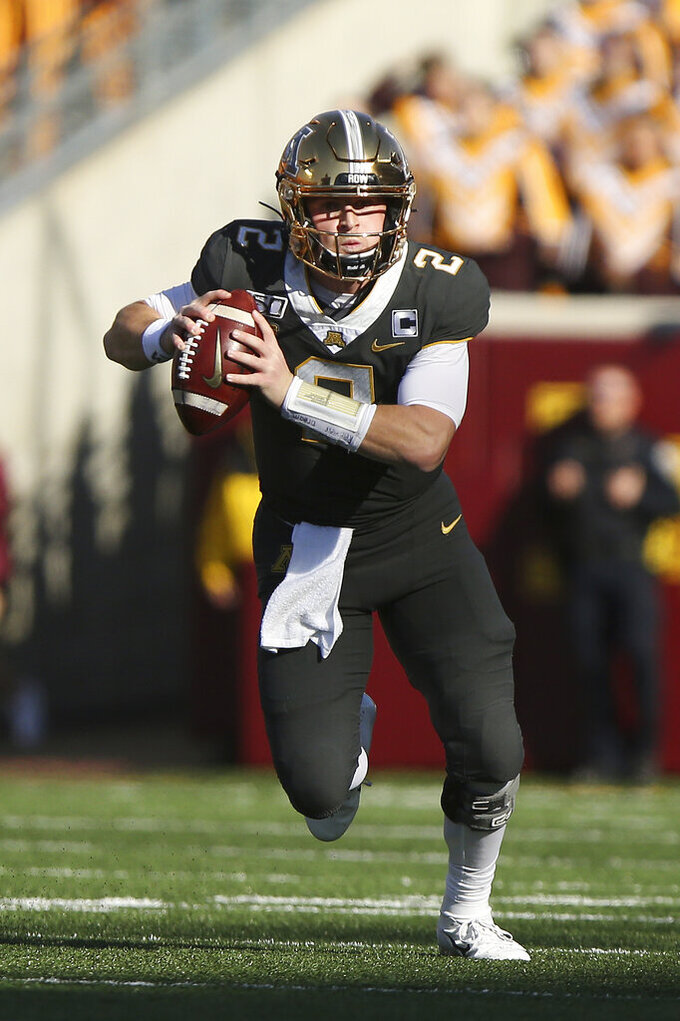 MINNEAPOLIS (AP) — The college football spotlight this weekend has been aimed at Alabama, where LSU's visit will mark the first regular-season meeting of the top two teams in the Associated Press poll since those same teams played eight years ago.

There is quite the undercard on the schedule, too, another matchup of unbeaten teams that will be staged, believe it or not, in Minnesota: When No. 5 Penn State visits TCF Bank Stadium on Saturday, No. 13 Minnesota will take part for the first time in 15 years in a game with both sides ranked in the top 15.

"You've got P.J. Fleck in his third year trying to get these guys to really believe, 'Hey, this is what we can do. You guys have bought into the offseason program, and we can win games, and now look at us. We're undefeated, and we're playing Penn State, and everybody's talking about us. This is who we are. This is your new Minnesota,'" said ESPN analyst Kirk Herbstreit, before raving about James Franklin's six seasons of work reviving a long-time power: "Penn State's brand is back."

The outcome will have a significant impact on the Big Ten championship chase. The Nittany Lions (8-0, 5-0, No. 4 CFP) are tied with Ohio State for first place in the East Division two weeks ahead of a showdown against the Buckeyes, and the Golden Gophers (8-0, 5-0, No. 17 CFP) have a two-game lead on Iowa and Wisconsin in the West Division with the Hawkeyes and Badgers facing each other on Saturday.

The College Football Playoff field will be influenced, too, with Penn State landing in the top four in the first edition of the rankings. True to form for their profession, however, Fleck and Franklin have each taken the one-game-at-a-time mentality to the extreme, insisting on the isolated goal of going 1-0 this week.

The Nittany Lions, whose last national championship was in 1986, have yet to be selected for the four-team playoff. They won the Big Ten title in 2016, though, presenting the Gophers a program to strive for.

"We're on our way to building that in terms of restoring our tradition from the past to the present," Fleck said, later adding: "You earned the right for a big game because of what you've done. The only way to continue to have that is keep having success in these big games, big moments."

Minnesota declared a sellout of its 50,850-seat facility, the first capacity crowd in 27 games since the 2015 season finale against Wisconsin (52,850). The announced attendance for November home games last year for the Gophers was just 31,068 (Purdue) and 32,134 (Northwestern).

CALL HIM, NOT ME

Despite his status at a prominent program, Franklin's name often lands on the speculative lists of candidates for vacancies, real or expected, that emerge with other powers around the country. Florida State became the latest example, after the recent firing there. Franklin slyly steered the subject at his news conference this week toward his counterpart and friend, Fleck, who also surfaced as a person of interest for the Seminoles.

"I've also heard P.J.'s name mentioned a bunch, so you guys could spend a lot of time calling him and talking to him," Franklin said.

Fleck signed a contract extension through 2026 about two hours later.

Penn State's starting front four will be down one Saturday as junior defensive tackle Antonio Shelton serves a one-game suspension. He spit at a Michigan State player in the fourth quarter at Michigan State on Oct. 26, when he was given an unsportsmanlike conduct penalty and ejected from the game. Sophomore P.J. Mustipher is listed as the starter for this week.

Minnesota has rich rivalries with border-state foes Iowa and Wisconsin and a trophy game with Michigan, matchups that have each been staged more than 80 times. The Gophers have a newer prize to play for against Penn State, too, the much-less-celebrated Governor's Victory Bell that the Nittany Lions repossessed with a 29-26 overtime win in their last meeting in 2016 to take a 9-5 lead in the series.

The Gophers grabbed it after a 24-10 victory at home in 2013, a little too hard, actually. The trophy came apart when the boisterous players tried to hoist it in too many different directions, needing some repair. The governors of Minnesota and Pennsylvania commissioned the hardware in 1993, when the Gophers were the opponent for the inaugural Big Ten game for the Nittany Lions.

POINTS ON THE BOARD

Minnesota has outscored conference foes 206-72 and posted 28 points or more in all eight games, the first such streak by the Gophers since 1904 when they still had high school teams on the schedule. Penn State has allowed just 77 points, the second-fewest in the FBS.