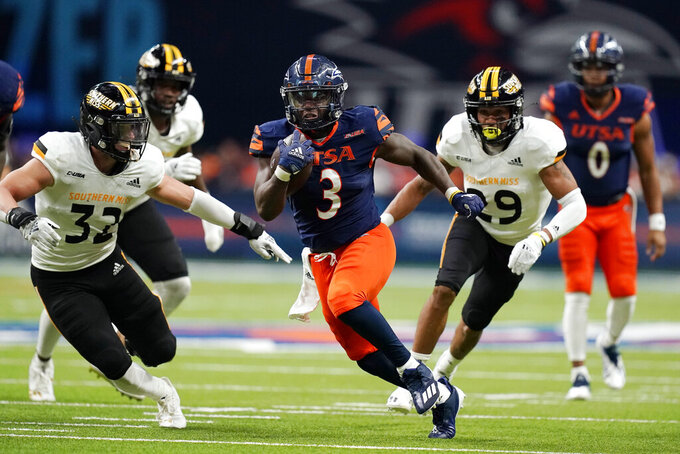 Line: UTSA by 1 1/2, according to FanDuel Sportsbook

UTSA is returning to the Dallas area to try to finish the best season in school history after its undefeated run ended at 11-0 with a blowout loss at North Texas in nearby Denton. The Roadrunners bounced back with a 49-41 victory over Western Kentucky in the Conference USA championship game. UTSA is looking for the school's first bowl win in its third try. San Diego State can set a school record with a 12th victory. The Aztecs, who lost to Utah State 46-13 in the Mountain West championship game, have won 11 games three other times.

UTSA RB Sincere McCormick against the No. 2 rushing defense in the country. McCormick has 1,479 yards (113 per game) and 15 touchdowns. San Diego State is allowing 78 yards rushing per game. The Aztecs have allowed one 100-yard rusher this year. McCormick hit that mark eight times this season, including a season-high 204 in the C-USA title game.

UTSA: QB Frank Harris didn't play in the second half against North Texas after losing two fumbles for a stagnant offense, although coach Jeff Traylor didn't say whether he was benched or injured. Harris threw two interceptions against Western Kentucky but had 81 yards rushing when the Roadrunners won with the ground game.

San Diego State: DE Cameron Thomas is tied for seventh nationally with 11 1/2 sacks. His 20 1/2 tackles for loss are tied for the Mountain West record.

The Frisco Bowl trails only the two College Football Playoff semifinals for best combined records of the teams at 23-3. ... While UTSA finished the regular season in The Associated Press Top 25 but out of the CFP rankings, the opposite was true for San Diego State. The Aztecs, unranked by the AP, were 24th on the final CFP list. ... The Roadrunners were supposed to play in the Frisco Bowl last year, but it was canceled because of COVID-19 issues for SMU. UTSA lost to Louisiana-Lafayette 31-24 in the First Responder Bowl in Dallas. ... San Diego State punter Matt Araiza won the Ray Guy Award. He is the school's first major postseason award winner. ... UTSA is celebrating the 10th anniversary of its debut season. The Roadrunners played a year as an FCS independent before joining FBS in 2012. ... The Aztecs were shut out 27-0 by Ohio in the 2018 Frisco Bowl. That's the school's only shutout loss since 2006.