Washington hopes to avoid looking ahead vs. Portland State 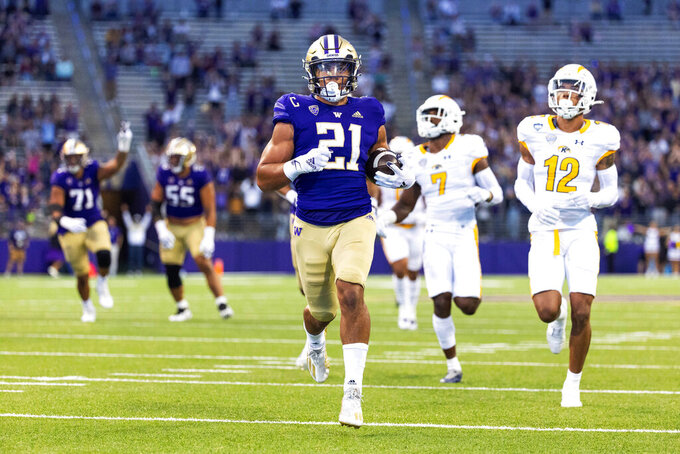 Washington running back Wayne Taulapapa heads for a touchdown against Kent State during the first quarter of an NCAA college football game Saturday, Sept. 3, 2022, in Seattle. (Dean Rutz/The Seattle Times via AP)

Washington hopes to avoid getting caught looking ahead to its marquee nonconference game against No. 14 Michigan State next week. The Huskies' offense looked terrific in the opening 45-20 rout of Kent State with transfer Michael Penix Jr. throwing for 345 yards and four touchdowns. It should be just as easy to move the ball against Portland State. But the Huskies' defense gave up too many chunk plays against Kent State and would like to see better tackling. For the Vikings, it’s another payday to help the program's finances and a chance to show they can be competitive in the Big Sky Conference. Portland State led until the final minutes at San Jose State last week before losing 21-17.

Washington vs. looking ahead. Having an FCS opponent the week before a big showdown against a Big Ten opponent seems like an opportunity to rest key players. But that backfired on Washington last year when the Huskies lost at home to Montana before getting thumped at Michigan. Portland State has a history of playing tough against FBS opponents, including a 2015 win at Washington State.

Portland State: QB Dante Chachere accounted for 353 yards for the Vikings in the opener. Chachere threw for 270 yards and two touchdowns and rushed for another 83 yards. His favorite target was Beau Kelly, who had nine catches for 133 yards. Chachere does need to improve his ball security after throwing two interceptions.

Washington: RB Wayne Taulapapa. If there was one area of Washington’s offense that could have been sharper, it was the run game. Taulapapa had 57 yards on 11 carries, but 28 came on a touchdown run. Overall, Washington averaged 3.9 yards per carry. The pass game will be at the core of what the Huskies want to do offensively, but seeing an uptick in the run game will be important moving forward.

Washington LT Jaxson Kirkland is expected to play. He was forced to sit out the first game for declaring for the NFL draft and hiring an agent before returning to school following an ankle surgery. ... Portland State outgained San Jose State 395-288 last week but had two turnovers and a special teams mistake. ... Washington is 59-4-3 all-time against current Big Sky Conference schools. ... Portland State will open the 2023 season with consecutive road games against FBS opponents Oregon and Wyoming.