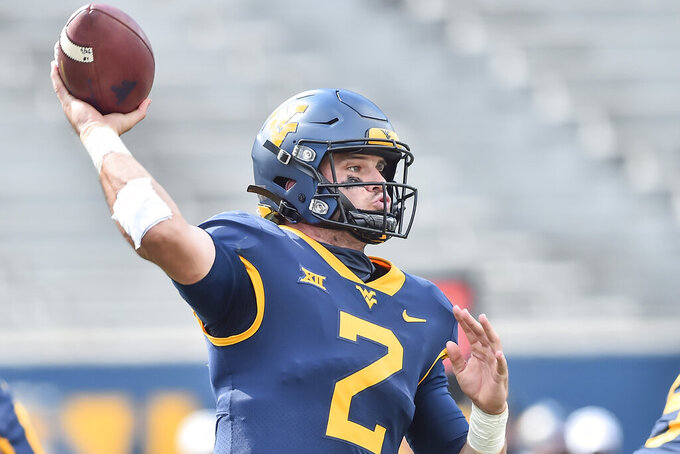 West Virginia’s Jarret Doege knew he had some work to do after a poor finish to the 2020 season.

The quarterback needed the offseason to improve in several areas, among them awareness in the pocket, arm strength, footwork and foot speed. His also reduced his body fat. With that effort behind him, Doege's confidence in West Virginia's offense is high entering his second full season as the starter as the Mountaineers get set to open at Maryland on Saturday.

“I think I had a really good camp, to be honest," Doege said Tuesday. "I wanted to accomplish some things that we talked about. I think I showed that through fall camp that I could move around in the pocket, get some yards when I needed to, and my deep ball was on point as well.”

Doege was third in the Big 12 with 2,587 passing yards in 10 games. But he threw just 14 touchdown passes and his accuracy was all over the map, often underthrowing his receivers. He couldn’t get the Mountaineers into the end zone in a Dec. 5 loss at Iowa State, then fell flat in a Liberty Bowl win over Army.

Against the Black Knights, Doege held onto the ball too long before throwing an interception. He also lost a fumble during an awkward backpeddle in the pocket that led to an easy Army touchdown. He was replaced in the second half by backup and former starter Austin Kendall.

Doege said after the bowl game, he had a talk with his brother, former Texas Tech quarterback and current Southern Cal assistant coach Seth Doege.

“I think he gave me two days just to sit there and think about what happened," Seth Doege said. "And from there on, it was wipe it out and let’s go to work.”

Kendall transferred to Louisiana Tech for his final season, handing the starting job this season back to Doege.

Wide receiver Bryce Ford-Wheaton said Doege especially took control over the summer, gathering his pass catchers after workouts to get in some extra throws.

“Whether we wanted to or not, he would always drag us out there: ‘Come on, run 10 routes for us’ or something like that,” Ford-Wheaton said. “So they were doing like a little quarterback school every day after workouts. You could just come from a heavy (workout) or whatever. But Doege doesn’t care. He wants you out there running the routes, too. So it’s a lot of timing and I think we’ve got it down. We’re really on the same page.”

West Virginia coach Neal Brown said football players can be separated into two categories: the dreamers who only think about attaining their goals, and those with visions who have a plan and put it to hard work.

Doege is “a guy with a vision,” Brown said. “He’s earned the opportunity to go out and compete, and compete at a high level. My expectation and my belief is he’s going to play well. There’s nothing I’ve seen over the last nine months that would tell me any different.”

Doege, or anyone for that matter, won't exactly know what they'll get from Maryland. The Terps return 10 starters on defense from the team that went 2-3 during the pandemic-interrupted 2020 season and played just twice over the final six weeks.

Maryland compiled 14 sacks in five games, led by Mosiah Nasili-Kite’s four. Cornerback Tarheeb Still broke up eight passes in four games as a freshman, including four against Rutgers in the season finale.

Conversely, what version of Doege the Terps will face is unknown.

“If we see something during the game, we’ll probably adapt,” Maryland safety Jordan Mosely said. “We’ve got a pretty sound game plan going in. Just try to confuse him with our alignments and our (coverage) disguises, especially at the safety position. But that’s probably one of the better quarterbacks we’re going to see this year. We’re definitely ready for the competition.“