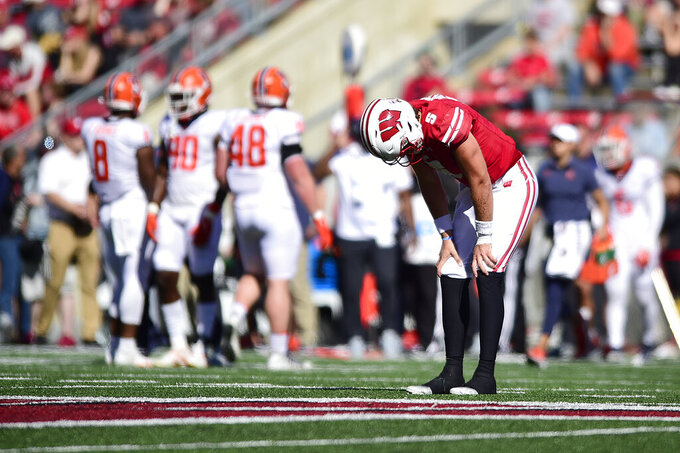 Wisconsin quarterback Graham Mertz (5) reacts after an incomplete pass during the second half of an NCAA college football game against Illinois, Saturday, Oct. 1, 2022, in Madison, Wis. (AP Photo/Kayla Wolf)

The second month of the college football season often reveals issues that nonconference play might have masked and which teams could be in for long seasons.

Things have quickly gotten bleak for No. 18 Oklahoma and Wisconsin.

The Sooners lost for the second straight week Saturday, this time in humbling fashion to a TCU team that put up more than 600 yards.

Wisconsin was hammered by Illinois, losing to the Illini at home for the first time in 20 years and falling to 2-3.

“Something needs to change because that’s not us,” Badgers safety John Torchio said. “That’s not the Wisconsin football we all know.”

After the departure of Lincoln Riley, Oklahoma fans were bitter but also emboldened by the arrival of Venables, the former Clemson defensive coordinator.

Despite all Riley's success — 55-10 with two Heisman Trophy winners — he never did get the defense right.

Venables would toughen up the Sooners in a way that traitor Riley never did, OU fans hoped.

After Adrian Martinez and No. 25 Kansas State took apart the Oklahoma defense last week, Max Duggan and TCU blew it up. The Horned Frogs and offensive coordinator Garrett Riley — Lincoln's little brother — had scoring plays of 73, 67, 62 and 69 yards.

Oklahoma also heads into the Red River Rivalry against Texas next week with questions at quarterback. Dillon Gabriel left the TCU game after taking a hard hit to the head.

The Big 12 looks wide open, with unbeaten Kansas — of all teams — sitting 2-0 with rival Kansas State. No. 9 Oklahoma State probably would like a word in that discussion, too, after winning at No. 16 Baylor.

In 2020, Oklahoma lost its first two Big 12 games and went on to win the conference. So don't count out the Sooners. But the last two weeks have been so bad that it's starting to feel like a reset season under a new regime.

The issues at Wisconsin seem more dire. It's one thing to get blown out by Ohio State last week. It's a very different thing to get run out of Camp Randall Stadium by Bret Bielema's Illini.

When the former Badgers coach took over at Illinois, he tried to downplay the idea he would build the program in Wisconsin's image, but that's pretty much what he's done.

Chase Brown and the Illini outgained the Badgers 137-2 on the ground, the lowest total for Wisconsin in a game since 2015.

“I knew if we wanted to have a chance, we couldn’t let them run the football on us like we did a year ago,” Bielema said.

No program in the country has had a stronger identity and maxed out its potential as well Wisconsin over the last couple of decades. The Badgers seemed to have lost their way, going 15-10 in the last two-plus seasons.

If you think the Big 12 looks wide open, get a load of the Big Ten's West Division, where five weeks into the season there are six 1-1 teams and the Badgers sitting at the bottom at 0-2.

No. 21 Minnesota was the flavor of the week in the West, but then the Gophers, missing star running back Mohamed Ibrahim, were dumped at home by Purdue.

Who else is pushing Oklahoma and Wisconsin for most disappointing team in the first half of this season?

Houston was billed as the class of the Group of Five, but the Cougars are now 2-3 after losing an overtime game to Tulane and its third-string quarterback on Friday.

No. 17 Texas A&M responded to the Appalachian State upset last month by beating Miami and Arkansas, but the Aggies showed Saturday that things are far from fixed on the offensive side of the ball.

Mississippi State thumped Texas A&M (3-2), sending the Aggies to No. 2 Alabama next week with few answers on offense and a banged-up starting quarterback in Max Johnson.

Alabama will also have the latter next week in Tuscaloosa: Heisman Trophy winner Bryce Young left the Tide's victory at No. 20 Arkansas in the second quarter with a sprained shoulder. Coach Nick Saban said the initial prognosis is that the injury isn't too serious.

The Tide sputtered, then pulled away from the Razorbacks with Young on the sideline. There is always another blue-chipper waiting to play for Saban, and Jalen Milroe flashed big-time ability in relief. But he is no Young.

Texas A&M upset Alabama last season, the highlight of an otherwise ho-hum 8-4 season. The Aggies then won the offseason with a monster recruiting class and Jimbo Fisher firing off verbal barbs and accusations at Saban in defense of his program.

Next week's game was circled on a lot of calendars back in the spring because of the back and forth between Fisher and his former boss. Now, TCU at Kansas will be hosting ESPN's “College GameDay.”

“We’re not where we need to be, no doubt,” said Texas A&M's $95 million, fully guaranteed coach.

Like the Sooners and Badgers, the Aggies have been exposed and there is not a lot of reason to believe things are going to get much better.

Kicking five field goals is no way to beat the No. 1 team in the country.

Top-ranked Georgia was in very real trouble at Missouri until putting together two fourth-quarter touchdowns drive to avoid a stunning upset by the 28-point underdog.

To be fair to Mizzou coach Eli Drinkwitz, most of the Tigers' field goals were from far enough out that it would be hard to criticize him for not being bold enough when he had the defending champs on the ropes.

Georgia had its own red-zone issues until finally overpowering the Tigers over the final 10 minutes.

There will be a temptation now to nitpick Georgia and its vulnerabilities. Don't get too worked up. Road games can be weird and rarely does a team make a run to a national championship without having to fight through a wobble or two.

The Bulldogs host Auburn next week. After those Tigers blew a 17-point lead at home to LSU, the Bryan Harsin watch is on high alert on The Plains. ... There have been coaches fired each of the last three weeks. Will Harsin or Colorado's Karl Dorrell make it through Sunday employed? ... The first top-10 matchup in North Carolina State history was a dud for the 10th-ranked Wolfpack, smothered by No. 5 Clemson. The Tigers don't look quite as imposing as they did a few years back, but the Atlantic Coast Conference is absolutely theirs for the taking. ... No. 6 USC and UCLA are both 5-0 for the first time since 2005. The Bruins got there by beating No. 15 Washington on Friday, their first victory against a top-15 team since 2015. ... With a chance to assert itself as a possible threat in the ACC to Clemson, No. 23 Florida State couldn't handle No. 22 Wake Forest. The Demon Deacons have beaten the Seminoles three straight season. ... No. 12 Utah has been rolling since leaving Gainesville with a frustrating loss in the season opener. With every passing week, the Utes are going to regret letting that game slip even more. ... In the annals of baffling Pitt losses, add this: Georgia Tech (days after firing its coach) 26, No. 24 Pitt 21. ... Salute to a couple of teams that don't win often: FIU beat New Mexico State for its first victory against an FBS team in three years. UConn beat Fresno State for its first victory against an FBS opponent not named UMass since 2017.