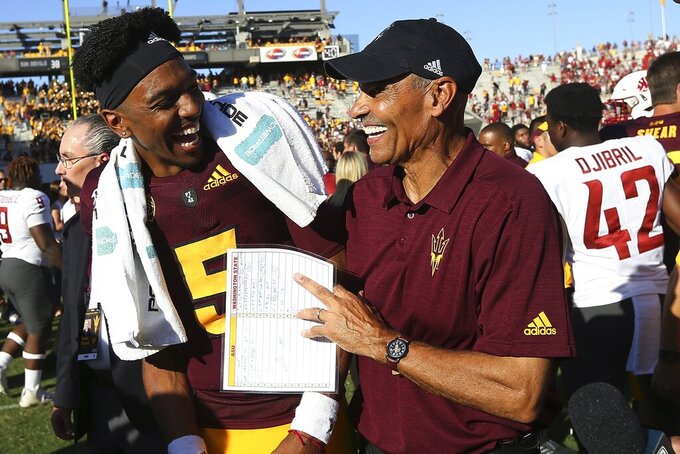 SALT LAKE CITY (AP) — Rugged defense has defined Utah and Arizona State since the start of the season.

Now their offenses are grabbing the attention as they prepare to face off in a key Pac-12 South showdown Saturday.

Tyler Huntley was the driving force behind back-to-back wins over Washington State and Oregon State for the 13th-ranked Utes (5-1, 2-1 Pac-12). Huntley threw for a season-high 334 yards against the Cougars and followed up two weeks later by completing a season-high 82.4% (14 of 17) of his passes against the Beavers.

"This year he's just grabbed this whole offense and stepped in front," junior receiver Samson Nacua said. "He said, 'I'm the guy. You guys fall behind me and I'm going to get you there.' We've all fallen right behind him."

Huntley is far from a one-man show. Zack Moss is on pace to record his third consecutive 1,000-yard rushing season. Several receivers have also stepped up to give the senior quarterback reliable targets. The Utes have had six different receivers make at least 10 receptions through six games.

The No. 17 Sun Devils (5-1, 2-1) have also enjoyed success driven by a quarterback. Jayden Daniels has proven that earning the starting nod as a freshman was no fluke.

Daniels already has three 300-yard passing games in his first six career starts. He ranks third in the Pac-12 in passing yardage (1,610), trailing only Washington State's Anthony Gordon and Washington's Jacob Eason. His efforts have complemented running back Eno Benjamin, who has 529 yards on the ground this season.

Daniels is coming off his best performance of the season, with a career-high 363 yards passing and three touchdowns against Washington State. The freshman completed a career-best 72% of his passes.

"Jayden has probably captured a lot of people's imagination because of how he's played in the big moments," Arizona State coach Herm Edwards said.

Other things to know when Utah hosts Arizona State:

RISING STAR: With Britain Covey redshirting this season after a knee injury from last season that has kept him on the sidelines, Nacua has made the most of his increased opportunities at slot receiver.

Nacua has a team-high eight receptions for 136 yards over Utah's past two games. The former walk-on had just one catch for two yards in the team's first four games.

"Everyone seems a little surprised I'm doing it," Nacua said. "But I feel like I've come out every year I've been here and worked my butt off, made plays always, and just waited for my opportunity."

FOURTH DOWN POWER: Taking a smash-mouth approach to fourth down is paying off for Arizona State.

The Sun Devils converted a fourth down by putting the ball in Benjamin's hands during two second-half drives against Washington State. He ran for a 32-yard touchdown in the third quarter on the first and gained five yards to set up the game-winning 17-yard TD run from Daniels on the second.

NO CHUNKS: Arizona State is one of just 10 FBS teams to not allow a 50-yard play this season. The Sun Devils have yielded just seven plays over 30 yards through six games. In defending the run, they have allowed just 10 plays over 10 yards — ranking first among FBS teams.