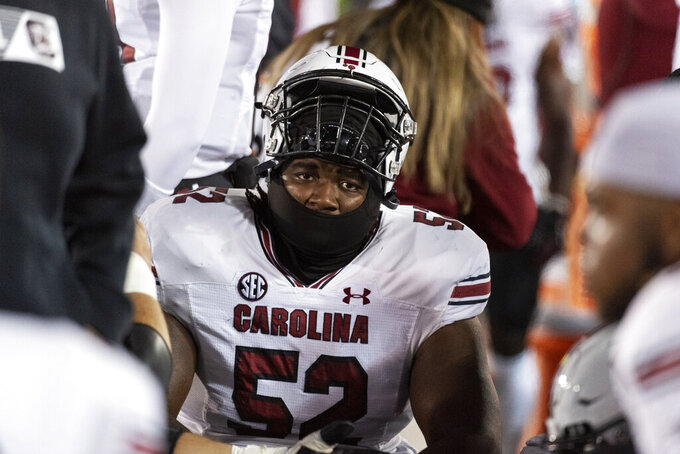 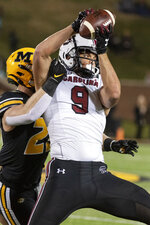 COLUMBIA, Mo. (AP) — Before the season, Missouri coach Eli Drinkwitz wasn’t sure if undersized Tyler Badie could handle the workload of being an every-down running back. Turns out, it’s the opponents who should be worried about the punishment being dished out by the Southeastern Conference’s leading rusher.

Badie rushed 34 times for 209 yards and a touchdown and Missouri held off South Carolina’s fourth-quarter charge to defeat the Gamecocks 31-28 on Saturday. Badie has rushed for 1,239 yards this season.

“He’s tough as nails,” Drinkwitz said. “If there’s a better running back in our conference, I’d like to see him.”

The Tigers (5-5, 2-4 SEC) built a 17-point lead when Badie, who is listed at 5-foot-8 and 194 pounds, scored on a 19-yard run with 12:31 left in the game. That’s when the opportunistic Gamecocks (5-5, 2-5 SEC) made things interesting by converting two Missouri turnovers into touchdowns and slicing the deficit to three points with 4:32 left.

But they never saw the ball again, thanks to Badie, who rushed for 63 yards on the final drive.

“At the end of the game, I want the ball,” Badie said.

The game turned late in the third quarter when blitzing safety Martez Manuel jarred the ball from South Carolina quarterback Jason Brown and defensive end Trajan Jeffcoat recovered in the end zone to give the Tigers a 10-point lead. Jeffcoat, a native of Columbia, South Carolina, said it was extra special to score a touchdown against his hometown team and called it a “hellified play.”

“Sometimes when you are in an odd-man protection and they bring six, you have to get rid of the ball,” South Carolina coach Shane Beamer said. “There were some communication issues. … That shouldn’t happen in the 10th game of the season. Really, really, really disappointing tonight.”

Missouri’s Connor Bazelak completed 15 of 23 passes for 180 yards and two touchdowns. Mookie Cooper had three catches for 72 yards and a touchdown.

Brown, who was making his second start of the year for South Carolina, completed 16 of 30 passes for 193 yards, with two touchdowns and one interception. Josh Vann had five catches for 62 yards and a touchdown.

The Tigers’ quarterback situation remains muddled. After missing last week’s loss to Georgia with an injury, Bazelak returned to the starting lineup and got off to a shaky start. On the first drive, he inexplicably floated a pass right into the arms of defensive back Cam Smith.

He made up for that in the second quarter when he delivered a 60-yard touchdown pass to Cooper while getting hit in the face by South Carolina’s R.J. Roderick. But after Bazelak threw another interception in the fourth quarter, Drinkwitz replaced him with Brady Cook.

Drinkwitz said he wanted a more mobile quarterback for the final drive, and Cook made that decision look good with a key 11-yard gain. Drinkwitz was also exasperated by Bazelak’s interceptions, which he called “really poor decisions.” Bazelak was the SEC co-offensive freshman of the year in 2020, when he threw just six interceptions. He has 10 interceptions this season.

Drinkwitz didn’t commit to a starting quarterback for next week.

“I’ll evaluate the tape and see who gives us the best chance to win,” he said.

Missouri: The Tigers entered the game ranked 129th out of 130 FBS teams in rushing defense, yielding an average of 270 yards per game, but they are getting better. One week after limiting No. 1 Georgia to 168 rushing yards, they held the Gamecocks to just 57 yards on the ground.