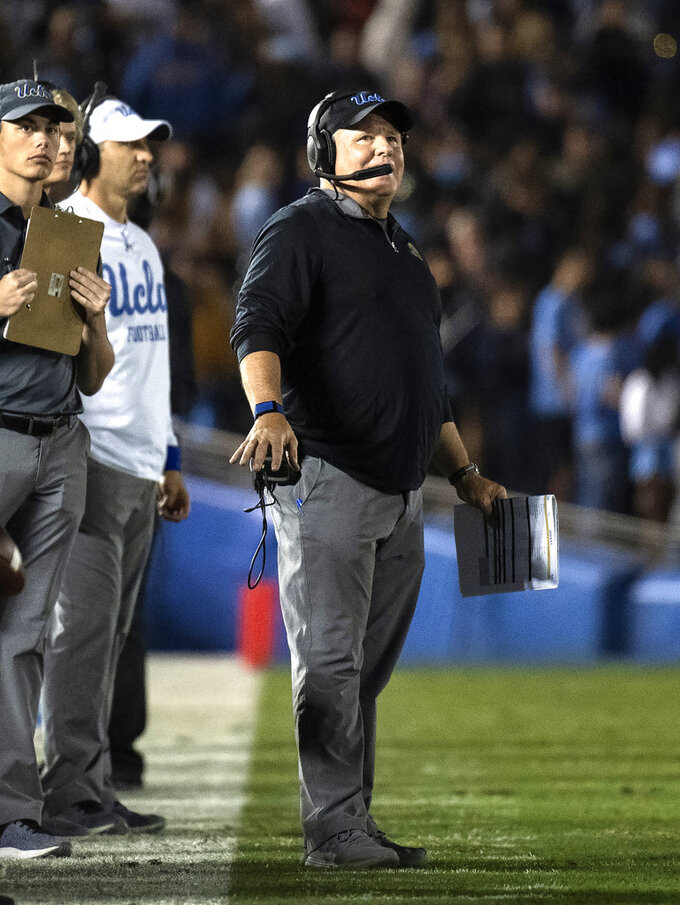 UCLA head coach Chip Kelly looks towards the scoreboard during the first half of an NCAA college football game against Utah Friday, Oct. 26, 2018, in Pasadena, Calif. (AP Photo/Kyusung Gong)

GAME OF THE WEEK: UCLA at Oregon. Normally, a 2-6 team against one that's 5-3 wouldn't generate too many headlines, but this one has Bruins coach Chip Kelly returning to Autzen Stadium for the first time since leaving for the NFL in 2013. Kelly has downplayed his return and says he will be all business, but there will be added excitement with the former Ducks coach back on the sideline. He led the Ducks to the BCS title game and two trips to the Rose Bowl during his four years in Eugene. Oregon will have extra motivation after being blown out on the road against Arizona last week, dropping the Ducks out of the AP Top 25.

MATCHUP OF THE WEEK: Stanford at Washington. The loser on Saturday could find itself in a difficult spot in the Pac-12 North race. No. 10 Washington State leads at 4-1, with the Huskies a half-game behind. The Cardinal are a game back after losing to the Cougars last week. Stanford won last year's meeting 30-22 behind Bryce Love's 166 yards rushing. Love has been hampered by injuries, so Stanford has become more of a passing team this season. The Huskies are looking to bounce back from a lackluster 12-10 loss to Cal last week, a game in which QB Jake Browning was benched. Washington coach Chris Petersen said Browning will start and the senior will be looking to bounce back.

NUMBERS GAME: Oregon State's Jermar Jefferson is sixth nationally with 129.3 yards rushing per game. Utah's Zack Moss is right behind him at 120.5. ... Pac-12 teams are 17-15 at home in conference play after going 18-3 in nonconference at home. ... Washington's Ben Burr-Kirven leads the Pac-12 with 10 or more tackles in seven games this season. ... Arizona's J.J. Taylor had 212 yards against Oregon last week, joining Ka'Deem Carey and Khalil Tate as the only Wildcats to have two games with 210 or more yards rushing.

UPSET WATCH: Keep an eye on Utah at Arizona State. The Utes are seven-point favorites and in control of the Pac-12 South, but Arizona State has kept all its games close in its first season under Herm Edwards. The Sun Devils also are coming off a 38-35 win at Southern Cal.

IMPACT PERFORMER: California LB Evan Weaver. The Bears won last week without an offensive touchdown for the first time since 1998 and Weaver was a big part of it. He returned an interception 37 yards for a touchdown and had a team-high 11 tackles.