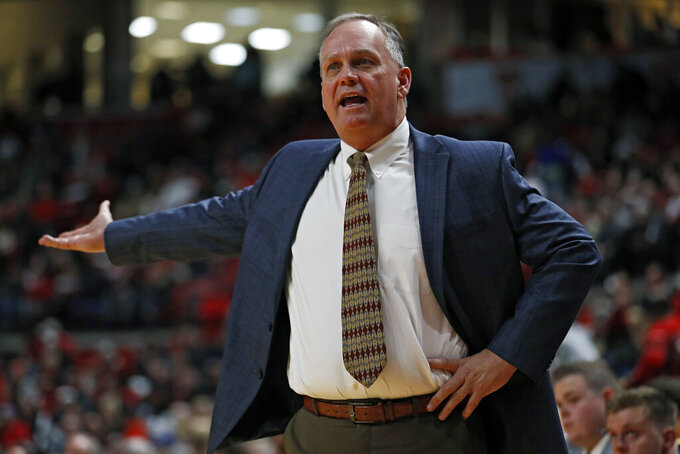 FILE - In this Dec. 16, 2019, file photo, Southern Mississippi coach Jay Ladner argues a call with the referee during the first half of an NCAA college basketball game against Texas Tech in Lubbock, Texas. While the major sports are finding ways to return to competition, college basketball is in a holding pattern, much like college football. College basketball coaches do have an advantage over the football coaches while in limbo. Since their season starts later, they get a chance to see how things play out, both in professional sports and in college football. (Brad Tollefson/Lubbock Avalanche-Journal via AP, File)

Baseball has begun its coronavirus-delayed season with limited long-distance travel and no fans in the stands.

The NBA has its Disney World bubble. The NHL will have two bubbles, in Toronto and Edmonton.

NFL rookies began reporting to training facilities last week as teams build up toward the start of training camp.

But while the major sports are finding ways to return to competition, college basketball is in a holding pattern, much like college football.

College basketball coaches do have an advantage over the football coaches while in limbo. Since their season starts later, they get a chance to see how things play out, both in professional sports and in college football.

“I know this for sure: it's not going to be like any other season we've ever had,” Southern Miss coach Jay Ladner said. “And even if we have a season, you're certainly looking at all types of changes and we all know that. But football is certainly the first order of business for administrators. A lot of what happens to them is going to drive, eventually, what happens to us."

The 2019-20 college basketball season came to an emphatic end on March 17 when the growing pandemic led to cancellation of the NCAA Tournament. A handful of leagues managed to complete conference tournaments, but most were just getting started when the season plug was pulled.

In the four months since, the pandemic has ballooned as hot spots have popped up across the country. The sports world has started to come back to life in recent weeks, starting with NASCAR and the UFC.

The other major sports followed, but the NCAA has delayed a decision about starting the fall sports seasons, including football.

College basketball, as it stands now, is slated to begin on Nov. 10. The NCAA initially looked at bumping up the start of the season to afford more scheduling wiggle room, but that was shelved as COVID-19 cases rose in dozens of states.

Basketball players, like other student-athletes, were allowed to return to campus for voluntary workouts last month. Some schools halted workouts after multiple athletes tested positive for COVID-19, but others have been able to continue offseason programs with multiple health precautions in place.

Whether the season starts on time, gets pushed back or is shelved altogether will depend on what happens with the pandemic and other sports over the next four months.

Stuck in a waiting game they can't control, basketball coaches have little choice but to prepare as if the season will start on time.

“People have said, what if you don't play until January?" Sacramento State coach Brian Katz said. ”I don't know, but I do know the alternative isn't good. If we did nothing and all of a sudden we are on track, we're behind the 8-ball. So the key is to go on as usual, within the confines and framework of what we're allowed to do, and otherwise don't think about it. We have to be ready for any and everything."

The college basketball season could end up having a different look this season.

The Big Ten and Pac-12 opted to eliminate nonconference games in football and the other major conferences are considering it.

College basketball could take a similar route, which would push back the start of the season until January for most schools. If the pandemic continues to roil into the fall, the NCAA could push the start of the entire season into January, setting the stage for a potential May Madness instead of March.

The financial implications will push the NCAA to do whatever it can to play some sort of season while trying to keep its student-athletes safe.

The cancellation of the 2020 NCAA Tournament led to a $375 million shortfall in revenue the NCAA distributes to its member schools, causing a ripple budgetary effect on universities across the country.

Losing football, the biggest money maker in college sports, would be another huge blow. A second year without the NCAA Tournament could be financially catastrophic, particularly for smaller schools.

“I'd be for anything if we're playing games,” Northern Arizona coach Shane Burcar said. “The last thing we want to do is lose competition dates. If we're playing 29 games or 31 games, we'd love to do that. And if that means playing in May, I'm totally fine with a May Madness.”

A lot still has to be decided over the next four months. As this pandemic has shown, a lot can still happen between now and then.