Column: Let's just get college football season over with 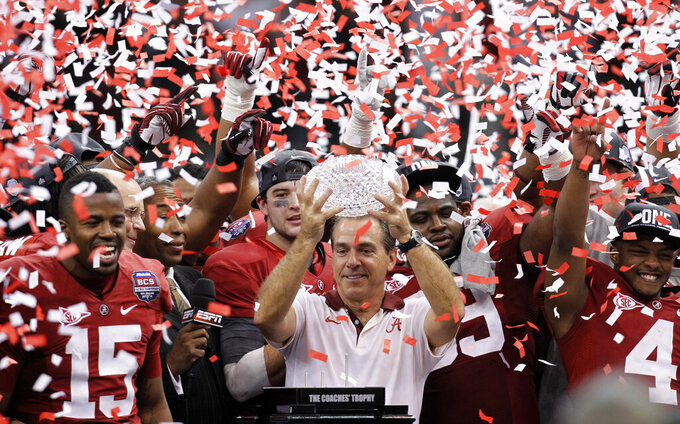 FILE - Alabama head coach Nick Saban celebrates with his team after the BCS National Championship college football game against LSU in New Orleans, in this Monday, Jan. 9, 2012, file photo, Alabama won 21-0. Saban's dominating run at Alabama is more than just wins and championships. He's also ruined the careers of many of his fellow SEC coaches and cost the league's other 13 schools more than $100 million in buyouts -- all in search of someone who can knock the game's greatest coach from his perch.(AP Photo/Gerald Herbert, File)

Let's just get this over with.

There's nothing to celebrate as college football hobbles to the finish line of a grim season in the midst of a horrific pandemic, which is only getting worse as Alabama prepares to face Ohio State on Monday night.

More than 4,000 Americans perished on Thursday — the deadliest day yet in the nearly year-long pandemic, according to John Hopkins University.

Many more will lose their lives before either the Crimson Tide or the Buckeyes hoist the national championship trophy in South Florida.

To be fair, college football has at times provided a much-needed respite in this season of despair.

We were duly impressed by Justin Fields and Ohio State sticking it to Clemson's increasingly unlikable coach Dabo Swinney with a dominating win in the semifinals, giving the Buckeyes a chance to break the Deep South's stranglehold on the top prize.

But this ending — if it is the end, since there has been talk of a postponement because of COVID-19 issues within the Ohio State program — feels more like a wake than a moment of triumph.

After the rash of cancellations and hasty schedule changes, the mostly empty stadiums and all-too-familiar hypocrisy, plus the daily reckoning with a highly contagious virus and a fear that we won't know its ultimate wrath for years, it's difficult to summon up the energy to cheer for anything at this point.

The Buckeyes illustrate that as well as anybody.

It looked liked they wouldn't even have a season when the Big Ten decided initially not to play in the fall. But the league reversed course after the Southeastern Conference and others hit the field in late September

Ohio State finally opened its season on Oct. 24, but wound up playing only five regular-season games — which wasn't enough to qualify for the Big Ten championship game.

Once again, the conference called an audible, waiving the six-game minimum to allow the 5-0 Buckeyes to face Northwestern in the title game. They knocked off the Wildcats, earned a spot in the College Football Playoff and romped past favored Clemson 49-28 in the Sugar Bowl semifinal.

A whirlwind, to be sure.

“I'm looking forward to finishing this thing the right way and then taking a deep breath and decompressing and trying to reflect on what just happened this year,” Ohio State coach Ryan Day said.

Amid all the tumult, the playoff retained its four-team, Power Five-only format (Power Four, actually, since the Pac-12 has apparently dropped big-time football).

Rejecting expansion was surely a prudent choice this season. The last thing we needed was even more games.

But once this pandemic is over, or at least under control, college football must consider major changes to a playoff system that is essentially closed to everyone except the most powerful of programs.

Both Alabama and Clemson have made the playoff every year but one since it was launched in 2014. Ohio State and Oklahoma have four appearances each. Notre Dame, inexplicably, is the only other program with multiple appearances.

In all, just 11 schools have reached the playoff over its seven-year existence, an unacceptably miniscule cabal when there are 130 schools in the NCAA's Football Bowl Subdivision.

As long as things remain the way they are — and, rest assured, that's just what the most powerful schools want — those same schools will dominate recruiting year after year, divvying up the best players while everyone else settles for the scraps.

They'll be the only teams with any legitimate chance of competing for a championship at the end of the season, especially with a selection format that is clearly stacked against non-Power Five programs.

This season, the final CFP rankings placed unbeaten Cincinnati at No. 8 — behind both two-loss Oklahoma and three-loss Florida.

Iowa State lost three times, including a 31-14 blowout at home by Louisiana, but finished No. 10 and received a high-profile Fiesta Bowl invitation. The Ragin' Cajuns? They lost only one game — to Sun Belt Conference campion Coastal Carolina on a last-second field goal — but ludicrously finished No. 19 in the CFP rankings and were shuffled off to something called the Frist Responder Bowl.

And, of course, there was Coastal Carolina, which went11-0 during the regular season, beat Brigham Young in what very well could be remembered as the game of the year, but was deemed only the 12th-best team by the CFP.

Obviously, these lower-profile programs wouldn't have fared so well playing a full slate of games in one of the major conferences. But they deserve to be recognized for their accomplishments, which simply has no chance of happening in the current format.

The playoff needs to include at least eight teams. A 16-team format would be even better.

But that's an issue for another day.

“The message that we’ve kind of been saying as a team is we’ve got one more,” said Ohio State defensive end Jonathon Cooper. “There's nothing else after this.”