Cougars visit the Ducks needing a win for bowl eligibility 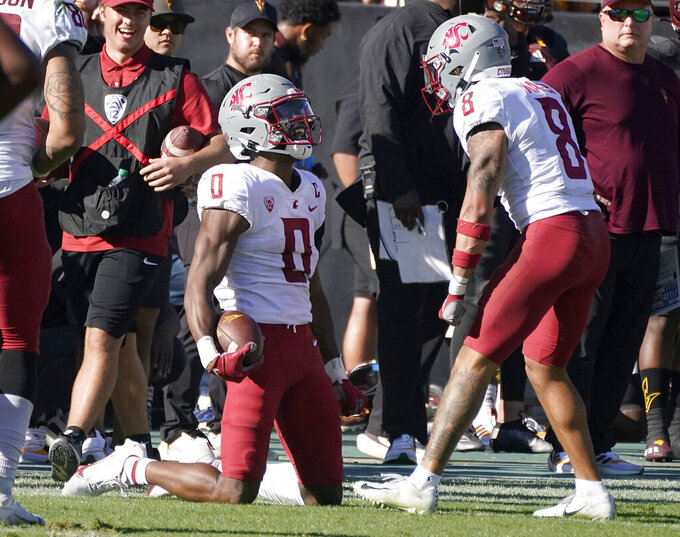 Washington State defensive back Jaylen Watson (0) celebrates his interception with Armani Marsh (8) against Arizona State during the second half of an NCAA college football game, Saturday, Oct 30, 2021, in Tempe, Ariz. (AP Photo/Darryl Webb)

The Ducks can clinch the Pac-12 North title and a spot in the conference championship game with a win over Washington State combined with a Stanford victory over Oregon State. With three games left, and the conference title game, Oregon continues to aim for a spot in the College Football Playoffs. Washington State is just a win away from bowl eligibility, despite the turbulence caused by the dismissal of coach Nick Rolovich over his refusal of a COVID-19 vaccination.

Oregon's running game exploded in a 26-16 victory over Washington with a season-high 329 yards rushing, including a career-high 211 yards from running back Travis Dye. The Cougars are allowing an average of 161 yards rushing a game, ranked seventh in the league. The Ducks are rushing an average of 218.7 yards a game, third in the league, and they are tied for the conference lead with 27 rushing touchdowns this season.

Washington State: Calvin Jackson Jr. ranks second in the Pac-12 with 667 yards receiving this season and fourth with five touchdowns. He has 11 catches of 20 or more yards. Last week in the Cougars' 34-21 victory over Arizona State, Jackson had a career-high 139 yards, including a 45-yard touchdown.

Oregon: Dye has rushed for 438 yards and eight touchdowns in four games since fellow running beck CJ Verdell was ruled out for the rest of the season because of injury. Dye ranks second in the Pac-12 with an average of just over 91 yards rushing a game. Dye also leads the Ducks in receiving yards with 277.

The Cougars have won two of their last three trips to Autzen Stadium. ... Washington State hasn't defeated a team ranked in the AP Top 25 since beating No. 25 Iowa State in the 2018 Alamo Bowl. The Cougars haven't downed a team in the top 10 since beating No. 5 USC in 2017 in Pullman. ... The Ducks have won 17 straight games at Autzen, the third-longest active winning streak in the nation. ... Washington State leads the Pac-12 with 20 takeaways. ... The Cougars have won four straight conference games, but they lost to BYU in the midst of that run.