Cristobal expects to be approached by other schools 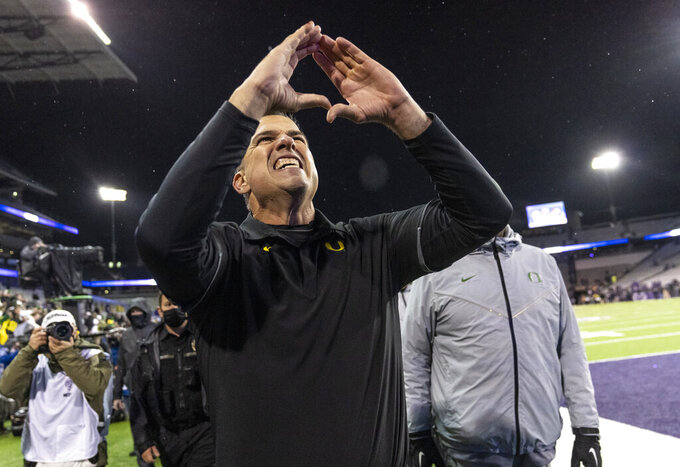 LAS VEGAS (AP) — Oregon coach Mario Cristobal said he fully expects to be approached with job offers from other schools.

“It happens every single year,” Cristobal said after the 10th-ranked Ducks lost 38-10 to Utah in the Pac-12 title game on Friday night. “Every year our entire staff, whether it’s behind the scenes, whether it’s public or not, we’ve always had different people come for our people, including myself.”

There are reports that Cristobal would be a top candidate at his alma mater Miami if coach Manny Diaz is fired.

Cristobal, a Miami native who won two national championships with the Hurricanes before serving as an assistant coach in different capacities, said he hasn’t been offered anything from any school as of yet.

“Let’s not create narratives as we sit here in this press conference,” said Cristobal, whose Ducks lost to Utah twice in three weeks by a combined final of 76-17. “Oregon is working on some stuff for me, that’s what I have right now, and that’s the extent of that conversation.

The Oregonian first reported that Cristobal was offered a contract extension, with hopes of keeping the 51-year-old in Eugene.

Cristobal, in his fourth season at Oregon, led the Ducks to two Pac 12 titles in 2019 and 2020 before getting manhandled Friday night in Las Vegas.

Center Alex Forsyth squashed the notion any rumors of Cristobal leaving the school served as a distraction to the team.

“I think we all block out the outside noise,” Forsyth said. “One hundred percent of our focus was on the game. They were the better team.”

Cristobal, who earns an annual salary of $5.5 million, has received extensions two of the past three seasons. Last December, he received a new six-year, $27.3 million deal that goes through the 2025 season.

Cristobal, who will owe Oregon a $9 million buyout if he leaves for another school before Jan. 14, refused to speculate what he may or may not do if offered the lateral move to Miami.

“I’m not gonna get into hypotheticals,” Cristobal said. “Just finished off a game that (we) played very, (and) coached very, poorly in. I understand you have a job to do. I feel like we’re going in circles with the same answer. You’re going to get the same response.”