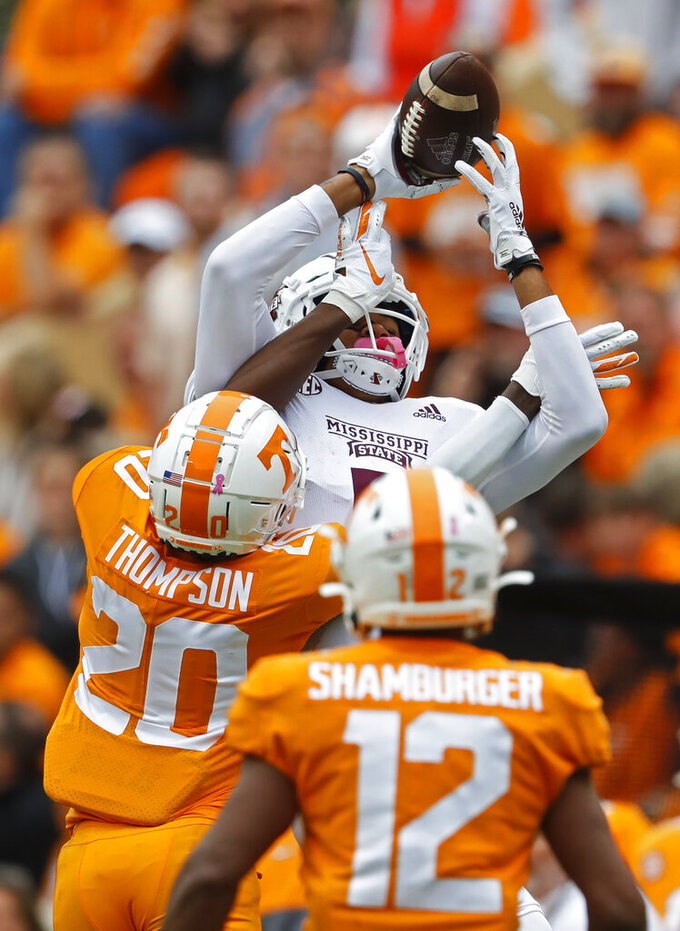 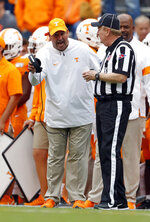 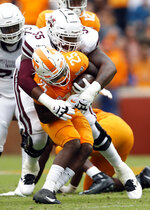 The Volunteers intercepted three passes, shut down Southeastern Conference rushing leader Kylin Hill and withstood an injury to quarterback Brian Maurer in a 20-10 victory over Mississippi State on Saturday.

Tennessee (2-4, 1-2 SEC) ended a six-game skid against Football Bowl Subdivision opponents by providing the kind of effort Vols fans had expected from their defense ever since Pruitt — a former national championship defensive coordinator at Alabama and Florida State — took over Tennessee's program last season.

Before Saturday, Tennessee just had eight sacks all season to match Texas A&M and Vanderbilt for the lowest total of any SEC team. Tennessee recorded 10 tackles for loss against Mississippi State (3-3, 1-2) after having just two last week in a 43-14 loss to No. 3 Georgia.

Tennessee safety Nigel Warrior said the difference was evident in practice this week and that defensive line coach Tracy Rocker had pointed it out.

"Coach Rocker, he said when we were younger we all had that little boy that just wanted to play football no matter what," said Warrior, who had an interception and two pass breakups. "We came out and played like those little boys who were in the front yard or backyard and wanted to go ball out and just wanted to touch the ball."

It was obvious in the way Tennessee handled Hill.

Hill entered the day averaging 119.2 yards rushing per game, but Tennessee limited him to 13 yards on 11 carries.

That dominant defense helped Tennessee overcome the loss of Maurer, who was 4 of 7 for 61 yards with two interceptions in his second career start.

The Vols led 7-3 when Maurer dove at the end of a 13-yard run and landed head-first late in the second quarter. The freshman quarterback grabbed the back of his neck immediately after the play, stayed in the game for the rest of that series but didn't play again.

Pruitt said after the game that Maurer sustained a concussion. Jarrett Guarantano, who had lost his job as Tennessee's starting quarterback last week, stepped in for Maurer and went 6 of 7 for 106 yards.

Guarantano's outing included a game-clinching 39-yard completion to Tyler Byrd with 2:35 left. Tennessee was clinging to a 13-10 lead when Byrd caught a pass about 2 yards beyond the line of scrimmage, went to his left and raced down the sideline until he reached the end zone.

It wasn't nearly as much fun for Mississippi State,

Mississippi State quarterback Tommy Stevens was benched in favor of freshman Garrett Shrader after the Penn State graduate transfer went 6 of 11 for 67 yards and throwing two interceptions in the first half.

Shrader was 5 of 10 for 79 yards with a touchdown and an interception. He also ran for 62 yards on 13 carries.

Mississippi State: The Bulldogs need to figure out their quarterback situation as they head into the toughest part of their schedule. Three of their next four games are against No. 5 LSU, No. 24 Texas A&M and No. 1 Alabama. Their lack of a consistent passing game is starting to hamper Hill. After rushing for over 100 yards in Mississippi State's first four contests, he's been held below 50 yards in back-to-back games.

Tennessee: The good news for the Vols is that their defense appeared to come of age Saturday. The bad news is that defensive back Trevon Flowers was injured in the first half and linebacker Henry To'o To'o received a targeting penalty in the second half. Pruitt said after the game that Flowers broke his leg. The targeting penalty to To'o To'o means one of the Vols' top defenders must sit out the first half of their game next week at No. 1 Alabama.

When the NCAA placed Mississippi State on probation in August after determining a part-time student tutor had completed coursework for athletes in an online class, 10 football players received eight-game suspensions as part of the penalties. Mississippi State can pick and choose which games the suspended players will sit out. All those players were eligible to participate in Saturday's game.

"I look back and I see a brown spot in the air, and I said, 'The only brown spot I know is the ball,' " Warrior describing his third-quarter interception.