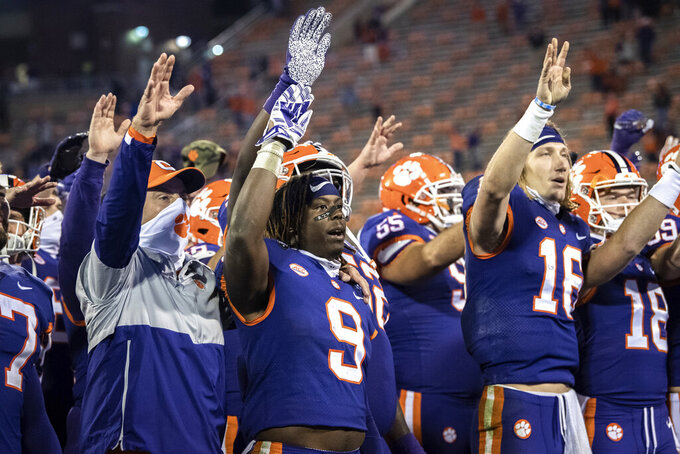 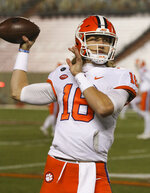 SOUTH BEND, Ind. (AP) — By the time this season is over, No. 2 Notre Dame and No. 4 Clemson may be tired of each other’s company.

The Fighting Irish (No. 2 CFP) and Tigers (No. 3 CFP) have only played five times, wtih Clemson's 3-2 advantage in the series highlighted by a 30-3 playoff semifinal blowout in 2018 on the way to the national championship.

The most recent game, however, was a 47-40 double-overtime thriller won by Notre Dame between — for this season, anyway — was an Atlantic Coast Conference clash that sets up a momentous rematch Dec. 19 in the ACC championship game in Charlotte, North Carolina.

There was no hiding the excitement for the teams following the ACC’s decision to not make either play games this past weekend amid various COVID-19 scheduling issues.

“(It’s) unusual in college football (when) you get a chance to play a team twice in the same season, but we are looking forward to it – what an opportunity,” Clemson coach Dabo Swinney said.

His Tigers (9-1, 8-1 ACC) are seeking their sixth straight ACC title. Brian Kelly's Irish (10-0, 9-0) have never won a conference title because of the program's treasured independence for the past century-plus.

Both teams have bigger aspirations. Clemson is trying for a third national title in the last five seasons. Notre Dame has won eight national championships as determined by The Associated Press, but none since 1988. It lost the 2012 title game to Alabama, which is a favorite again this year.

“Living through this pandemic has been very difficult for them, so this is really what they’ve been chasing – the opportunity to win an ACC championship and to win a national championship,” said Kelly, who now has 102 wins at Notre Dame, three behind Knute Rockne.

In the teams’ November meeting, the Irish overcame an opponent-record 439 passing yards by freshman D.J. Uiagalelei by limiting Clemson running back Travis Etienne to 28 rushing yards. Notre Dame's Ian Book totaled 377 yards, 310 through the air, and 140 rushing yards and three touchdowns by Kyren Williams were crucial.

Clemson will have star QB Trevor Lawrence back for the rematch.

“Sometimes when you play a second time it makes it hard to move the football because the defense gets the edge the second time,” Kelly said. “I don’t think this game is about who out-schemes who. I think in three areas – physicality, playmakers making plays and the fundamentals of the game – those will be how we prepare moving forward than trying to get too involved in out-scheming.”

“In Game 11, we are who we are, and they are who they are,” he said. “You certainly can learn from your first matchup, but at the end of the day it comes down to execution and taking care of the ball. You have to go make plays. I don’t necessarily think you trick people in games like this. You have to out-execute them.”

And if Clemson avenges the loss? It's not out of the question for Notre Dame-Clemson III in the College Football Playoff, either in the semifinals or the national championship game Jan. 11.