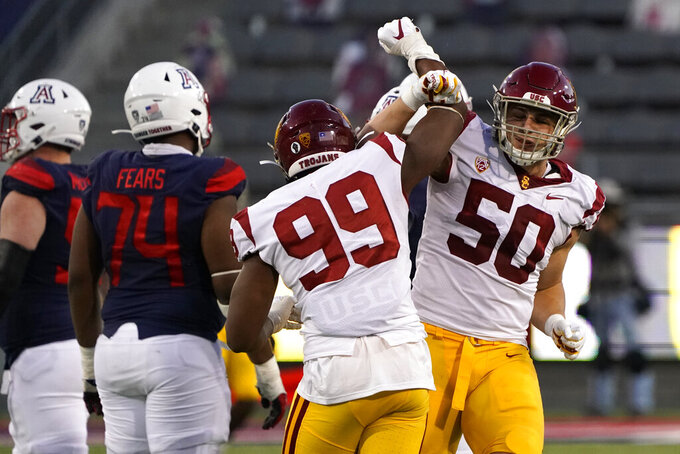 Nearly two years after making that decision, Figueroa has emerged as an unlikely star for the No. 16 Trojans and can show the Bruins just what they missed out on when the cross-town rivals play Saturday.

Figueroa has 3 1/2 sacks and six tackles for loss for USC (4-0, No. 15 CFP), leading the team in both categories ahead of defensive tackle Marlon Tuipulotu and outside linebacker Drake Jackson, two of the most sought-after high school recruits in the country in their respective classes.

There was little interest in Figueroa, who had been focused on baseball and only played football in his senior season at Cajon High School in San Bernardino. He ended up at Cal Poly and was on the scout team during a redshirt season in 2017, when the Mustangs won one game.

However, Figueroa had higher aspirations, which prompted a transfer home to attend Riverside City College.

“A lot of it had to do with the fact that coming out of high school I had a few teammates that, like, went to major Division 1 programs,” Figueroa said. “I kind of saw how they worked in practice and, like, saw the kind of people that they were and thought I had a shot to compete at that level.”

Interest from those programs soon followed, with Figueroa being recruited by multiple Pac-12 schools and the likes of Tennessee, Indiana and North Carolina. He signed with USC on Dec. 19, 2018, and had 10 tackles, a sack and recovered a fumble as a backup last season.

Roster turnover and the arrival of a new defensive coaching staff, including coordinator Todd Orlando and defensive line coach Vic So’oto, created an opening in the starting lineup that Figueroa has capitalized on. It culminated with a breakout performance in the 38-13 win over Washington State on Sunday when he had three sacks, one shy of the school single-game record.

Figueroa showed quickness on his first sack, darting past left guard Jarrett Kingston to pull down Cougars quarterback Jayden de Laura. He also has the requisite size at 6-foot-5 and 260 pounds.

But what really allows Figueroa to thrive is his work ethic, Orlando said.

“Well, smart and tough can get you a long way in life,” Orlando said. “It’s no surprise to me that he’s thriving in this package, but that’s the person. He’s got talent, but a lot of people have got talent. It’s the internal talent that to me measures a person, how much success they’re going to have, and he has that in bunches.”

Given the stakes against UCLA (3-2), as a USC win would clinch a spot in the Pac-12 title game next week, the Trojans will need every bit of that relentlessness to contain a multi-faceted rush offense producing 227.6 yards per game. Running back Demetric Felton has three 100-yard games, including a career-best 206 yards against Arizona, and quarterback Dorian Thompson-Robinson is equally dangerous on designed runs or scrambling when the pocket collapses.

UCLA did look vulnerable by allowing five sacks in a win at Arizona State after surrendering just three in its first four games, so there could be opportunities for Figueroa to add to his totals.

Those numbers are not what dictates Figueroa’s approach to the game. He knows hard work matters, and everything that has happened on and off the field in 2020 has only reinforced that.

“Effort’s the one thing you can kind of control, and it still even proves true now that as long as you, like, stay consistent in the things that you can control life will be good because there’s crazy things that we can’t control that happen all the time, so just try to control the things I can control,” Figueroa said.